Previous Next
View all photos

A Great guitar! Love the satin/natural (un)finish, especially on the neck. Sounds big, creamy, with a great sparkle as well.

This was one of my best investments! Traded my PRS in for this Les Paul because the PRS basically wore out. Frets and neck were in bad shape from playing it so much. I do miss the PRS and am hoping to get one next. (it's on my wish list)

The neck is very fast, slightly fatter than I was expecting but I think it is the nicest feeling neck I've played and fits my hand perfectly though the fret board is very wide but after 10 miniutes it feels great especially for bends. The nitro can get kinda sticky on the neck when playing for a long time like 2-3hours. The maple cap has a very nice grain to it and has a slight flame on some parts and others has the nice grain of maple. A very nice top.

The zero fret brass nut is a very nice feature, I reallly like it though haven't adjusted it because the action out the box was perfect and nice and low. The only thing that wasn't set up nicely was the pick ups. Far too close to the strings and just made everything sound abit muddy and crunchy and not very good really. I have lowered both pick ups and damn they sound excellent. really great sounding pick ups.

The guitar has a fair weight to it, not sure if it is heavier than my Epiphone Les Paul Custom or not but its pretty heavy none the less. the guitar has excellent sustain and is nice and loud when playing unplugged and has a very nice unplugged tone too which is always something to look out for as its a good pointer to how good a guitar will sound plugged in.

The case is extremely nice and the handle is set over the body so when carrying it the case sits flat and doesnt try to learn towards the ground which I personally love. the G force robot tuner thing is actually really good. not my type of thing but it is very accurate so I'm unsure if I'll put some klusons on or just leave it as is.

The strings are 10-46s which are far too light for me (I play 11-52s on les pauls) I'll change them when I can be bothered. This is the first every gibson I have owned and I was worried I'd get a bad one as I was unable to try it in person but this is perfect for and is probably the nicest feeling guitar I've ever played. I highly recommend it. I don't think theres anything I don't like other than the PCB electronics which I'm going to get done by a Gibson dealer because I would rather get it done professionally for a change

the lacquer will 'break in' on the neck... play it! The wide nut? that's pretty typical Gibson. the epis don't have a wide nut? I assumed they did. I have never played a recent epi for more than 1 minute to hate on it and put it down. And never an epi LP. Just 335s. You will adjust. What do you think of the REAL, hand carved slim taper? Nice, right?

I should be I the same wight range as an epi, most epis are a little weight relieved as are studios these days. Even I traditionally built LPs, weight is all over the map though. Some are under 8lbs, other (like the 88 standard I had) are over 10.... every legit Gibby or Gibson-level copy is very different. Tht's why I give Boom shit all the time. Having tried 2 non-related gibbies and a Chinese epi he thinks he gets what tis about. That's assuming a consistency between toy guitars and pro guitars, year to year, model to model, unit to unit that Gibson intentionally avoids.

my fiancee has put it away for my birthday now :( but I played it for the most part of today, just can't put it down. I changed the strings to a set of daddario 50-11s i had spare and now it feels spot on for me. The Gforce thing made changing strings take like 50 seconds, so quick!

The high end Epi lps are very nice guitars, you should try one. My lp custom has a bone nut, grover tuners and all the other stuff of a high end guitar. In 2015 gibson made the fretboards 0.5'' wider but with the same string spacing. its noticable but feels very good, makes the neck feel more comfortable to me having large hands. A few people have complained about it though. My epi weighs 8 and a half pounds and the gibson comes in at 9. A nice weight to it but nothing over the top. I like that gibson make every guitar different, it can be annoying but it also means that when you find the right one it is gold! I've never played a guitar that feels so good, the epi is a close second though. I like that this neck is slghtly fatter than all my other guitars, it does feel abit better for playing longer

2013 Les Paul Stuiowith switchable pots, it is a great addition to any collection.

I have a 2013 model with switched pots to go from humbucker to single coil. I was skeptical when I bought it but soon was pleasantly surprised to find that I could get some great tones out of it with a little trial and error. I own a 1984 custom and a 1982 standard which each have their unique sounds that I love as well, but I have to switch back and forth with Telecasters, and Stratocasters if I use them. This Studio model can do the work of several guitars and has become a go-to utility guitar in the studio and on stage. Considering it was less than $1300.00 it is going to be a keeper that I hope a grandchild will enjoy someday in the future.

Nice review. I love the Les Paul Studio, as you said it's such a great workhorse that you don't feel like you need to baby as much as a Custom :)

I own a 1991 ebony Studio and played it on countless gigs and in the studio. 1 piece mahogany back, 3 piece maple top, comfortable medium-sized mahogany neck, ebony fretboard, no binding, 490R/498T pickups. The neck pickup sounds warm and jazzy when played clean, and throaty and singing when distorted. The middle pickup position delivers a great rhythm sound, while the bridge pickup can sound (positively) gnarly in a clean setting and aggressive and rich when distorted. Due to the ebony fretboard, this guitar has a sharp attack and sounds more like a LP Custom than a LP Standard. This guitar has a great 70s/80s hard rock Les Paul Sound and is a real workhorse.

When I bought this guitar in 2008 I could never expect that it would follow me thru the most musical moments I had in my life. I love this guitar, it's good for EVERYTHING!

Moving from an Epiphone LP to a Gibson LP (via a few years of Strat exclusive playing) is probably the best investment I've made as a guitarist. The intangible 'feel' of an American made Gibson is what it is advertised to be. At the end of the day, better guitar = more playing = better guitarist.

I use mainly in recordings. One of the best Les Paul tones I've ever seen.

The Gibson Les Paul is an iconic electric guitar, that is for some people a bit pricey. The studio is nice because you get the classic feature of the traditional Les Paul but for a lower price at only $1200. The humbuckers are capable of achieving a wide variety of tones that can range from R&B to funk or to even blues. In conclusion, this is a go to guitar for me.

Not their best work...

I'm a huge Gibson fan, but I've never seen a Les Paul Studio that I've liked. ...Mostly because require so much work. Your typical Gibson guitar is in great playing condition! The dealers make sure that the intonation is correct, the playability is good and everything is in place... During my time trying out different Les Pauls I've come to always check the frets first when it comes to Les Paul Studios. The final touches have nearly always been neglected and the frets grind annoyingly against my fingers. Also the playability is somewhat weird and the guitar feels more like a toy than an actual Les Paul.

...Which is really sad, because I generally like Les Pauls. This particular model is often a good idea with a lazy excecution and it's something that really doesn't look good on a brand as prestiguous as Gibson.

'Twas perfick and in white too! Bought from a local guitar shop when I livedin Tokyo,Japan many moons ago.

Love this and always wanted a les paul. First USA made guitar. No pickguard, flameburst finish. The only thing I don't like about it is the 50's style profile neck. Thought about trading it in, but figured the sentimental value I've already put into it wasn't worth it.

you'll grow into the big neck, keep playing it

I've modded mine with a p90 in the bridge which makes it perfect for both rhythm and lead!

This is an inexpensive USA made Gibson. They make it cheaper by putting less sculpting on the body, it definitely doesn't feel or play like a LP custom, But I would put it above any Mexican fender. I have had the 1987 Studio since 2004 and its a great guitar for gigging and recording

Hard to find a good one, but grab it if you do

Found a traded in, well abused, black studio Les Paul. The body and neck were true, but it needed work. First I burned the paint off the body and refinished the bare wood with Tung Oil - beautiful. Next I re-levelled and re-dressed the frets. Then, I rewired it, put in CTS pots and a new switch, TonePros locking bridge, Tusq Nut, high ratio tuners, and Suhr Doug Aldridge Pickups. It's a rescue guitar that plays like butter and screams like a banshee.

Lightweight and very fun to play. More affordable than any other Gibson LP

Until you're making enough money from your music to buy a Gibson Les Paul, the Les Paul Studio absolutely does the job.

Bought new in the service 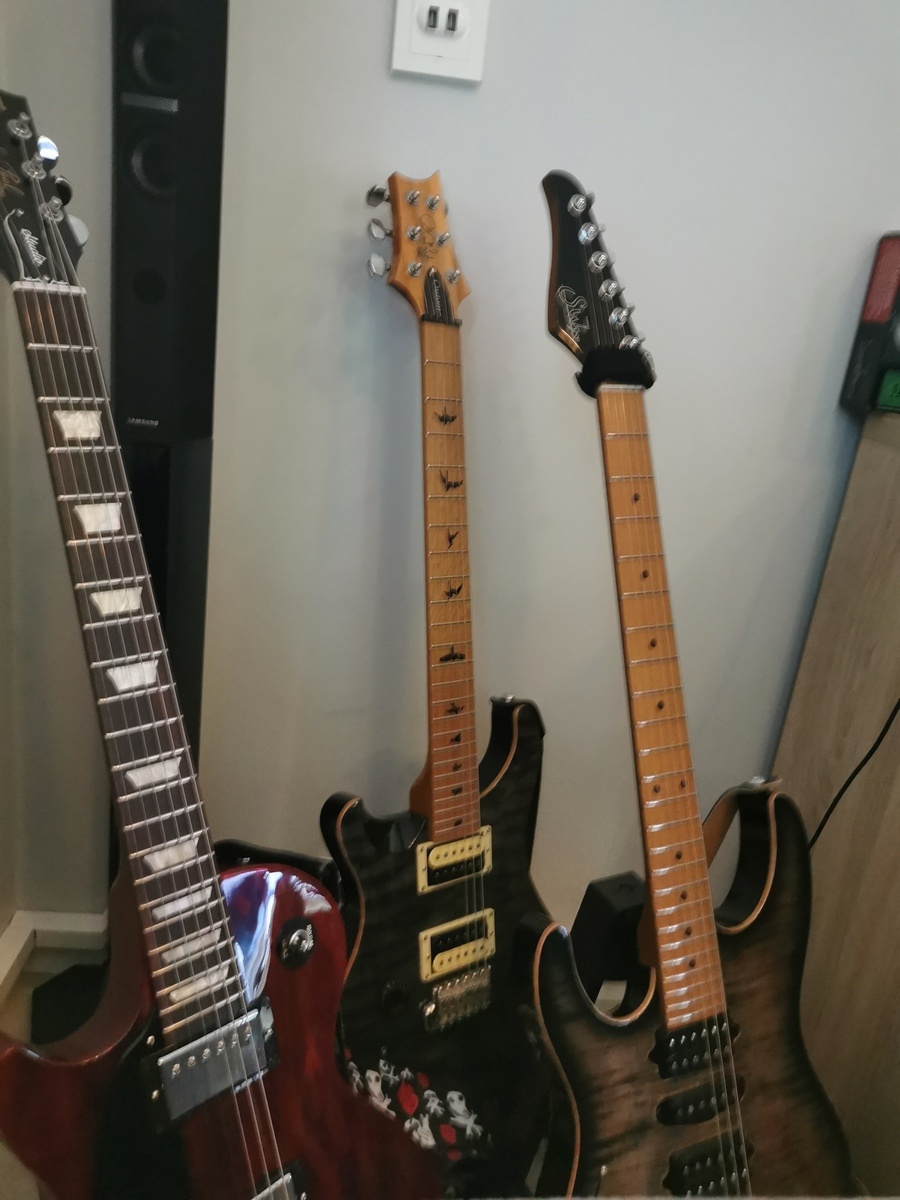 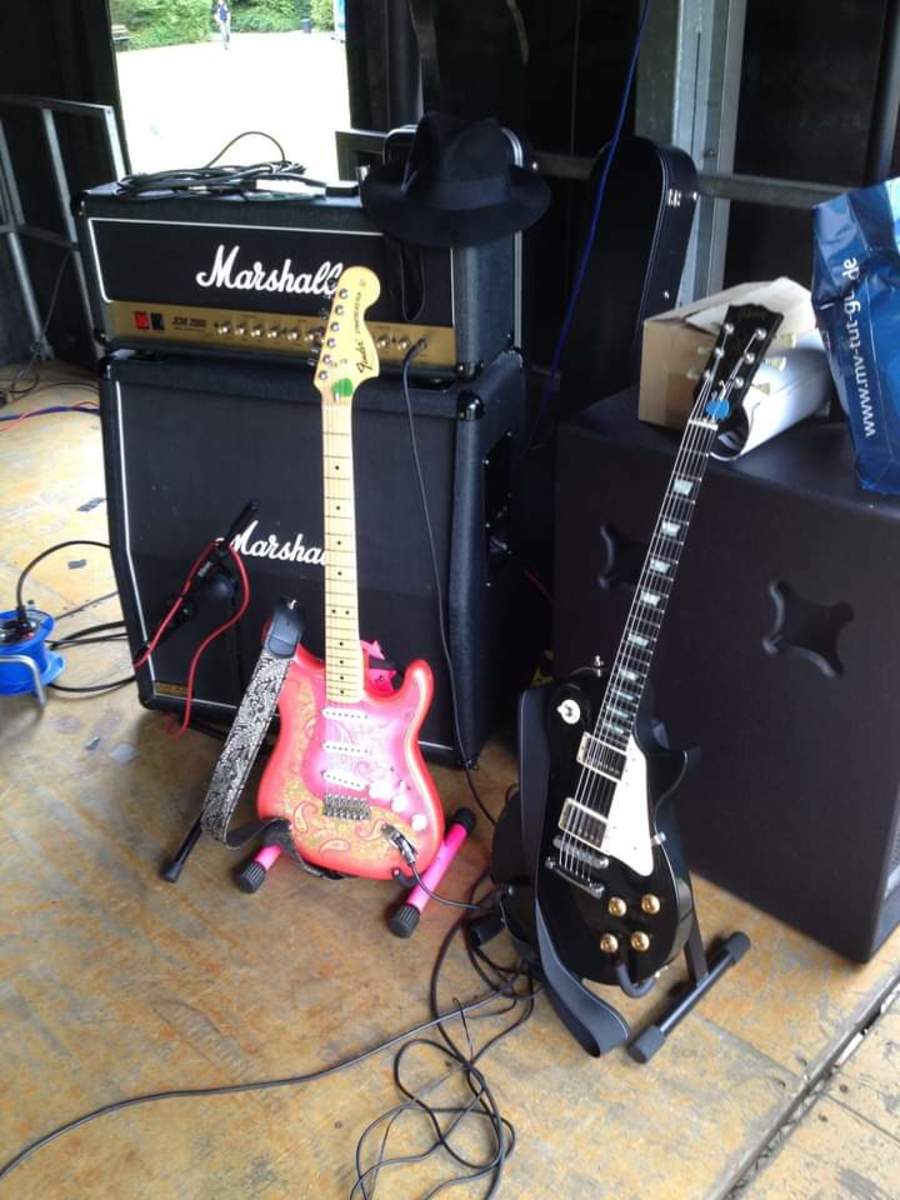 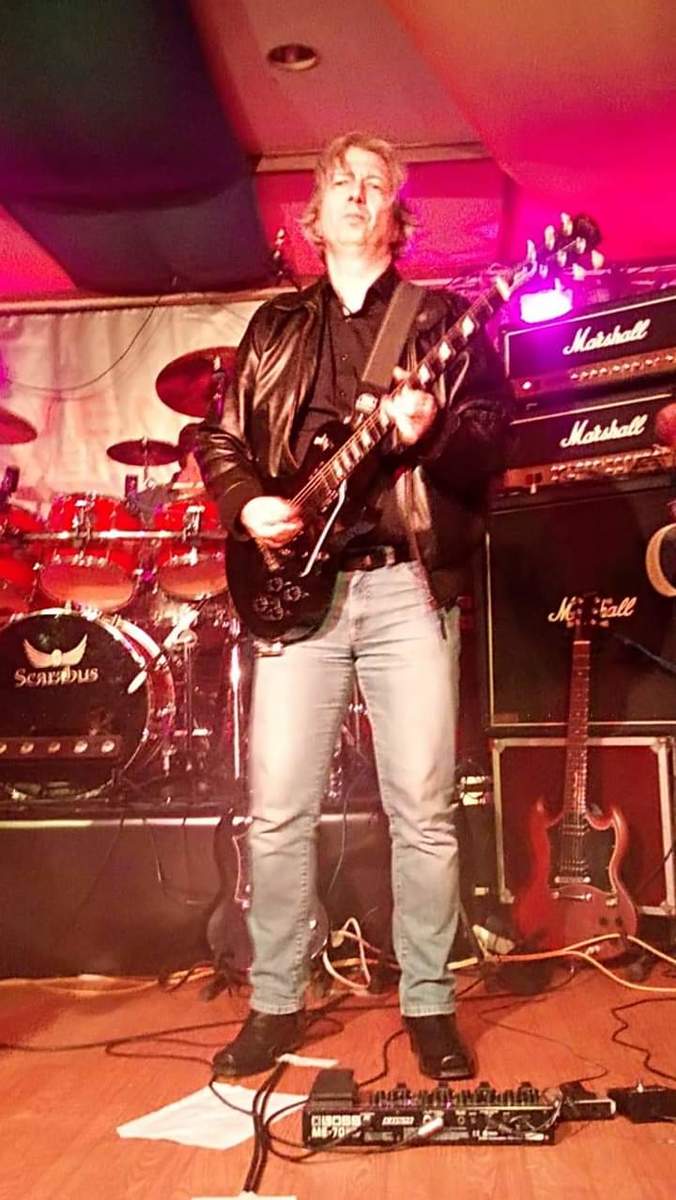 Live at Rickermann's with the Dave Prendergast Band. 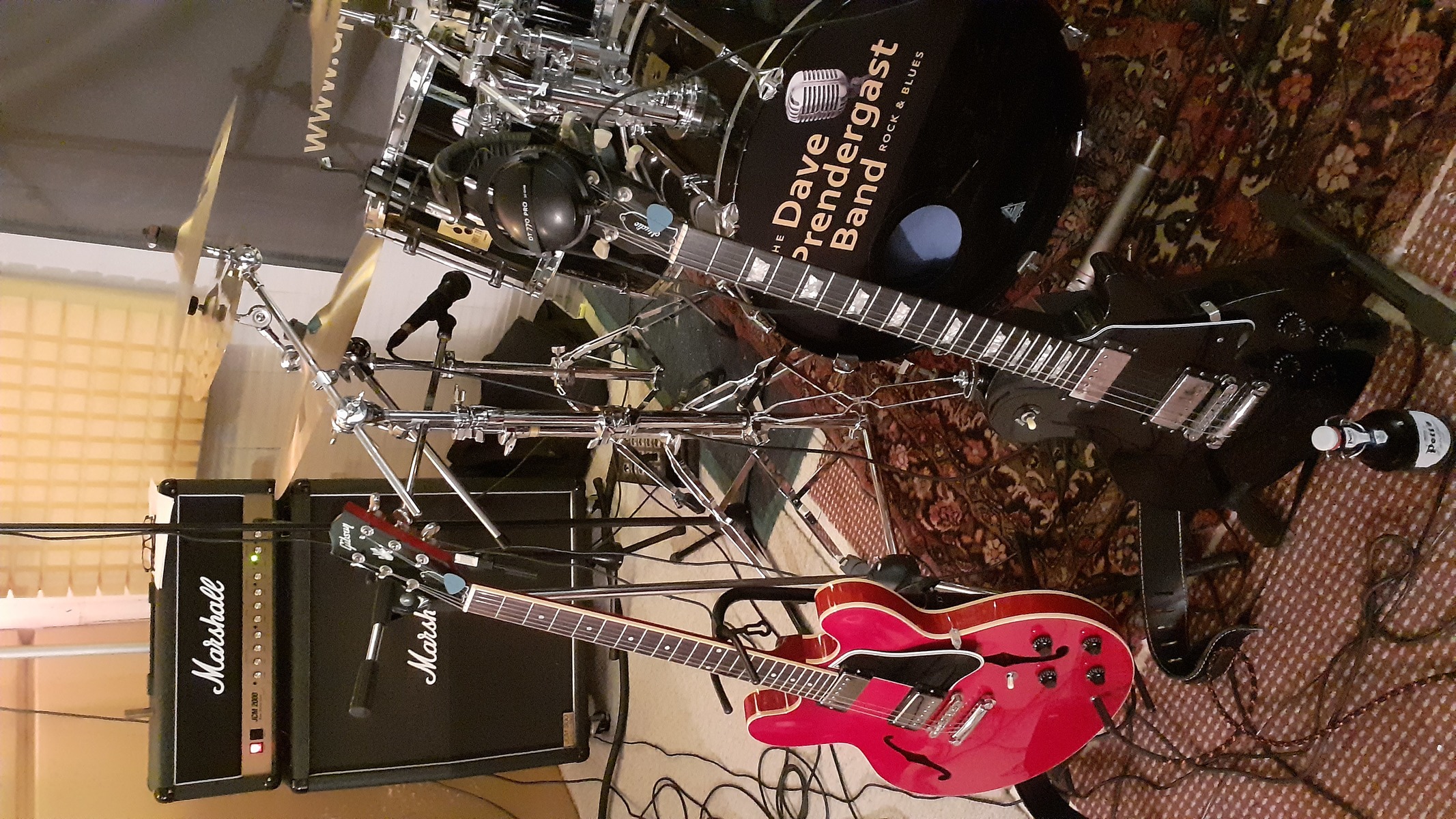 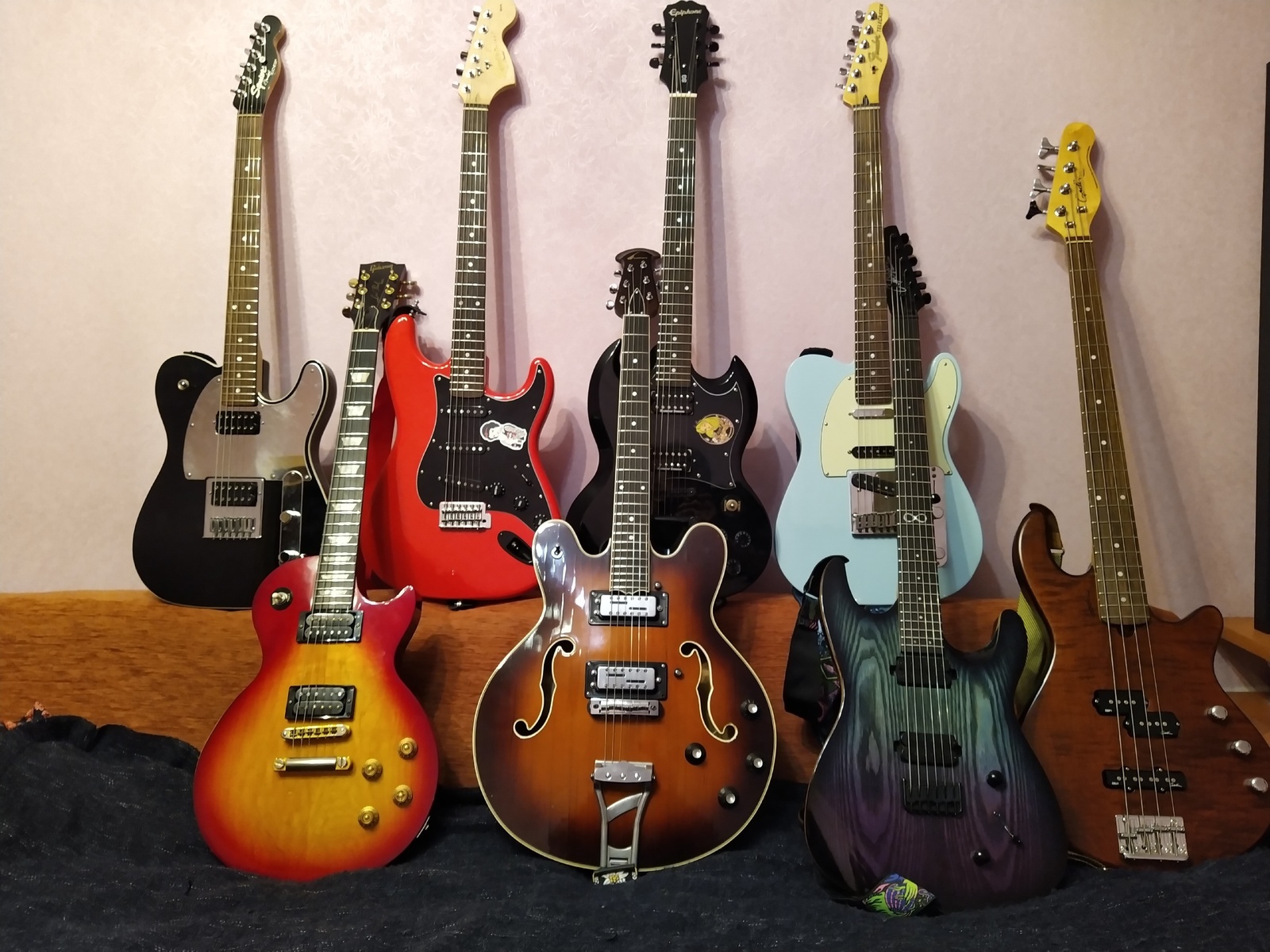 Comment on this photo
Previous Next
CHECK PRICE ON