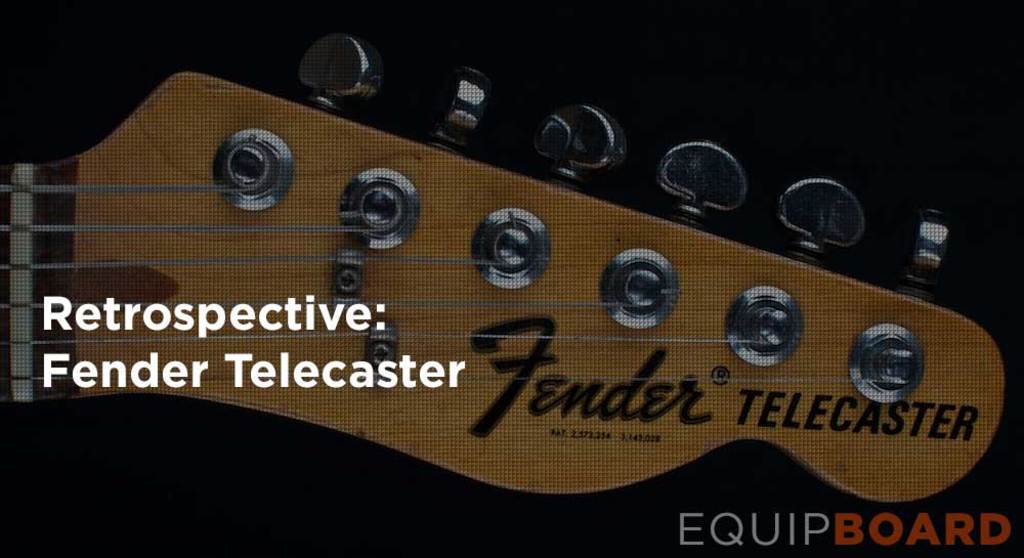 Since its inception more than 60 years ago, the Telecaster has been a constant fixture in American music. It started life as one of the many inventions by Leo Fender, the man behind the venerable Fender Music Corporation.

The first solid body guitar to achieve widespread appeal, the Telecaster is arguably responsible for the creation of the majority of modern music.

But how much do you really know about the instrument? Well, if you’ve always been curious as to the history behind America’s most influential guitar you’ve come to the right place. Now let’s get started!

So back when big jazz bands held sway in the 1920s, guitar players were searching high and low for a way to amplify their instruments so that they could be heard above the louder brass and percussion sections.

Amplification in one form or another has actually been around since roughly 1910, where hobbyists used modified telephone transmitters in order to amplify themselves. Around a decade later in 1920, musicians started using carbon button microphones. However, the signal was a bit too weak to work very well.

Though there’s some contention as to what the first “true” electric guitar is, all evidence points to an instrument affectionately dubbed the “Frying Pan”. Designed by George Beauchamp and Paul Barth (the president and vice-president of the National Guitar Corporation), the instrument was essentially a six string version of the acoustic lap steels that define the “Hawaiian” sound. The “Frying Pan” was actually manufactured by Rickenbacker.

The technology was later moved onto the electric Spanish guitar, which was adopted by jazz players. The first major company to mass produce electric “Spanish-style” guitars was Gibson.

And this is where Leo Fender comes into the picture. Fender actually started his career as an electronics repair man. Though he got his start repairing radios, he soon moved on to repairing pickups and amplifiers for the local musicians. And eventually, he even started designing his own!

Now this is where the story gets kind of funny. You see, Fender had a solid wooden guitar that he used as a platform to test pickups, but then local country players started asking to borrow this glorified pickup display for local gigs reporting that it had a “shinier” sound than the Gibson equivalents.

So he figured that if people liked his display model, he should pursue manufacturing an equivalent model. The first Telecaster was actually called an Esquire, but that model was quickly discontinued due to the instruments having a variety of manufacturing issues. Though Esquires are highly prized by collectors, the vast majority were returned under warranty.

The next incarnation of the Telecaster was called the Broadcaster, but that was quickly changed as well due to legal action by Gretsch. They had actually already registered the name “Broadkaster” for a line of drums.

This actually led to a short lived variant of the Telecaster called the “Nocaster”, because after facing legal action from Gretsch for the Broadcaster Fender simply removed the decal from the guitars.

In the summer of 1951, the Telecaster as we know it today was finally released. And as they say, the rest is history.

What’s so interesting about the Telecaster is the way it manages to sound like everything without sacrificing a voice of its own. For instance, did you know that Jimmy Page’s main studio guitar was actually a Telecaster? The solo from Stairway to Heaven? Yep, that’s a Telecaster.

And of course there’s the “true” Telecaster sound, mainly heard in country. It’s bright and twangy, but it’s also capable of conjuring up bluesy wails that would make any dedicated blues guitarist envious.

In all honesty, you’d be hard pressed to find a genre that can’t be played on the Telecaster. I mean, Jack White uses one for his fuzz driven garage rock sound. And though he’s not a household name, Danny Gatton also used the Telecaster to attain his unique “hill-billy jazz” sound. Fair warning, don’t look up Danny Gatton’s playing unless you want to feel really bad about your own.

So, what kind of sound does the Telecaster have? I would argue that it’s only real limitation is the imagination of the person playing it, because it’s shown itself to be capable of performing well across the entirety of Western music.

Known as “The Master of the Telecaster”, James Burton has performed and recorded with some of the most recognized musicians of all time. From Johnny Cash to Elvis Costello, odds are at least one of your favorite records has been massively influenced by his work.

In his time with Radiohead, Johnny Greenwood has proven that the Telecaster is capable of everything from sweet singing cleans to the raucous wails of noise rock.

Lead vocalist of The Clash, Joe Strummer was one of the first musicians to truly expand the image of the Telecaster. In his time with the instrument his various projects covered everything from ska to rockabilly, all the while maintaining his own unique voice.

Arguably one of the most influential guitar players ever, Keith Richards has rarely been spotted without his butterscotch colored Telecaster in tow.

Though his work has a distinct trend towards the heavier genres of music, John 5 is nothing if not flexible. He’s toured with David Lee Roth, hit the studio with Marilyn Manson and Rob Zombie, as well as releasing instrumental albums that cover every genre from flamenco to country. Fun fact, he was actually inspired to play the guitar by the television show Hee Haw.

Now that you’ve read up on the Telecaster, who could blame you for wanting one of your own? So if this article has got you craving the sweet twang the Telecaster is known for, this next section will be a good place to start.

When you’re on the market for a Telecaster, there’s no better place to start than the company that pioneered the design. A unique entry into the Fender guitar line, the Classic Player Baja Telecaster is an attempt to bring the tone and playability of the upper end Fender instruments to a guitar that’s more affordable to the average musician.

When Leo Fender left Fender in 1965 due to a severe illness, he later started the companies G&L and Music Man. During his tenure with G&L, Fender greatly advanced the design of a wide variety of his earlier instruments. Among these, the G&L Tribute ASAT probably showed the steepest improvement. Sporting a Leo Fender designed G&L MFDTM bridge pickup, a hard-rock maple neck, and a traditional Telecaster bridge with individual brass saddles, the G&L is more than capable of conjuring up any classic Tele tone.

If your taste as a musician tends more towards the heavier side, the Shecter PT Fastback may be right up your alley. Sporting a pair of Duncan Designed FG-101 SuperRock Alcino humbuckers, a Diamond Hardtail Bridge, and Grover tuners, this modern spin on the classic Telecaster design will be sure to turn heads.

Though the company may be known more for their budget minded instruments, the Michael Kelly MK1953CB is easily capable of keeping up with similarly priced models. The guitar features a flame maple body, a genuine rosewood fingerboard, a bone nut, as well as two pickups specially engineered by Michael Kelly to reproduce the vintage tone of retro instruments.

Though the company generally designs instruments to occupy a different musical niche, you would be hard pressed to find any faults with the ESP TE-2023TBR. The guitar features passive ESP Designed pickups, both single coil bridge pickup as well as a humbucker in the neck position. The TE-2023TBE also sports extra jumbo frets and a “Thin-U” neck contour, facilitating comfortable and speedy playing.

The Telecaster is still an important fixture in American music. It can keep pace with any genre, and sound great doing it.

Check it out Richie Kotzen's telecaster and awesome playing on it!