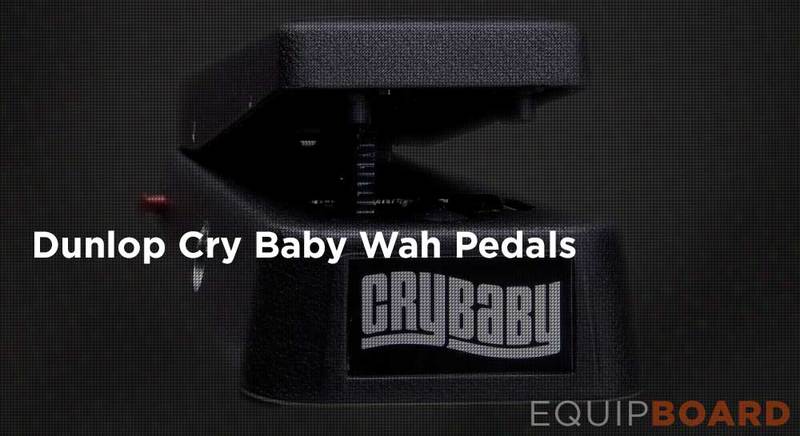 The Dunlop Cry Baby Wah Pedal is in production and still faithful to its original 1966 design. The sound of this Wah so permeates the history of rock and roll that everyone knows its timbre, even when they don't realize it. You can hear its effect adding punch and verve to the legendary solos of Jimi Hendrix, Eric Clapton, and their countless musical descendants.

The Cry Baby was first designed by Thomas Organ. It featured a hardy, extended metal chassis with a rubber grip, allowing the player to easily activate the footswitch and trigger its warm, analog sound with ease. The position of the musician's foot on the pedal controls the tone of the effect; more toe provides treble, while leaning down on the heel brings up the bass. It works nicely in series with a heavy overdrive or gentle distortion fuzz pedal, and its intuitive foot control can inspire rhythmic manipulations of the wah effect. The effect itself is a simple one, known in electrical engineering as a bandpass filter. The circuit filters your input signal, selecting a frequency range (or band) that is accentuated, while the frequencies above and below that band are reduced. By shifting your foot forward and backward, the player can control the frequency range that is allowed through the pedal's bandpass filter.

Check out this documentary of the Cry Baby to really get an understanding of the evolution of this wah wah.

There are a number of variations on the original Cry Baby Wah available for purchase from Dunlop. The GCB95 most closely models the classic sound known through the decades, while the GCB95F uses Italian-made Fasel inductors to reconstruct the circuitry of the original 1960s Wah pedals. There is the CM95 Clyde McCoy Cry Baby, which features a vintage grumble originating in the pedals of the Thomas Organ Company and Jen Electronics. If you've got a single favorite rocker, you can hone right in with the the custom-made SW95 Slash, DB01 Dimebag, or EVH95 Eddie Van Halen signature models.

When musicians talk about the warm, analog Wah pedal effect, it's almost certain that the Cry Baby Wah Pedal is the Arcadian vision they have in mind. This timeless pedal is still a favorite of rock and funk bands. However, using it better than Hendrix or Clapton is a challenge that is still yet to be accomplished.