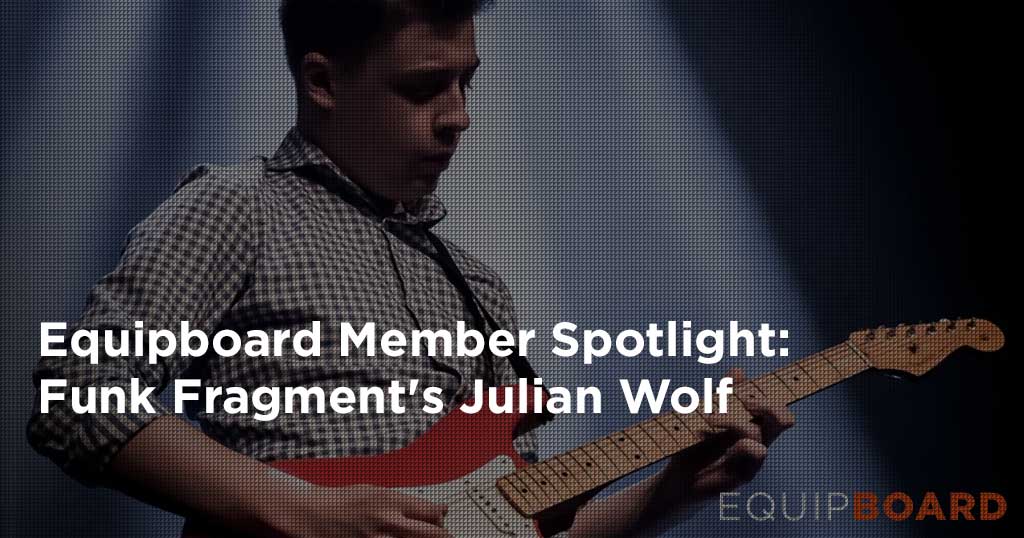 Julian Wolf is one of the very first moderators of Equipboard. He's been around since early days of the site as an inspired Eric Clapton fan, and is releasing an album and planning an upcoming tour. In this piece, we catch up about his personal gear collection, his upcoming album release, winning the SchoolJam competition, and performing at Musikmesse.

German guitarist Julian Wolf on his new Album, the 2019 tour and Gear through the years

Julian was born on 27 September 1998 in Radebeul, Saxony, Germany. Since his childhood days, the guitarist and composer made music at home and played a few concerts with a number of bands and musicians during his years in primary school and high school. In 2013, he formed his first band. Now at age 20, Wolf is primarily known for his work as the lead guitarist and co-composer of the German funk rock band called Funk Fragment. The band wrote, recorded and toured extensively during 2017 and 2018 and was named the best German newcomer band at the Musikmesse in Frankfurt am Main in April of 2018. On 4 January 2019, Wolf will release his first-ever album, entitled “Demos & Covers”. It is a guitar-only album and will feature ten tracks as well as one bonus track. The guitarist will tour extensively behind his new record in 2019 before getting back to his band Funk Fragment. Wolf told Equipboard what gear he used during his time with early bands, his era with Funk Fragment and what he will be using live for his acoustic sets on the upcoming tour. 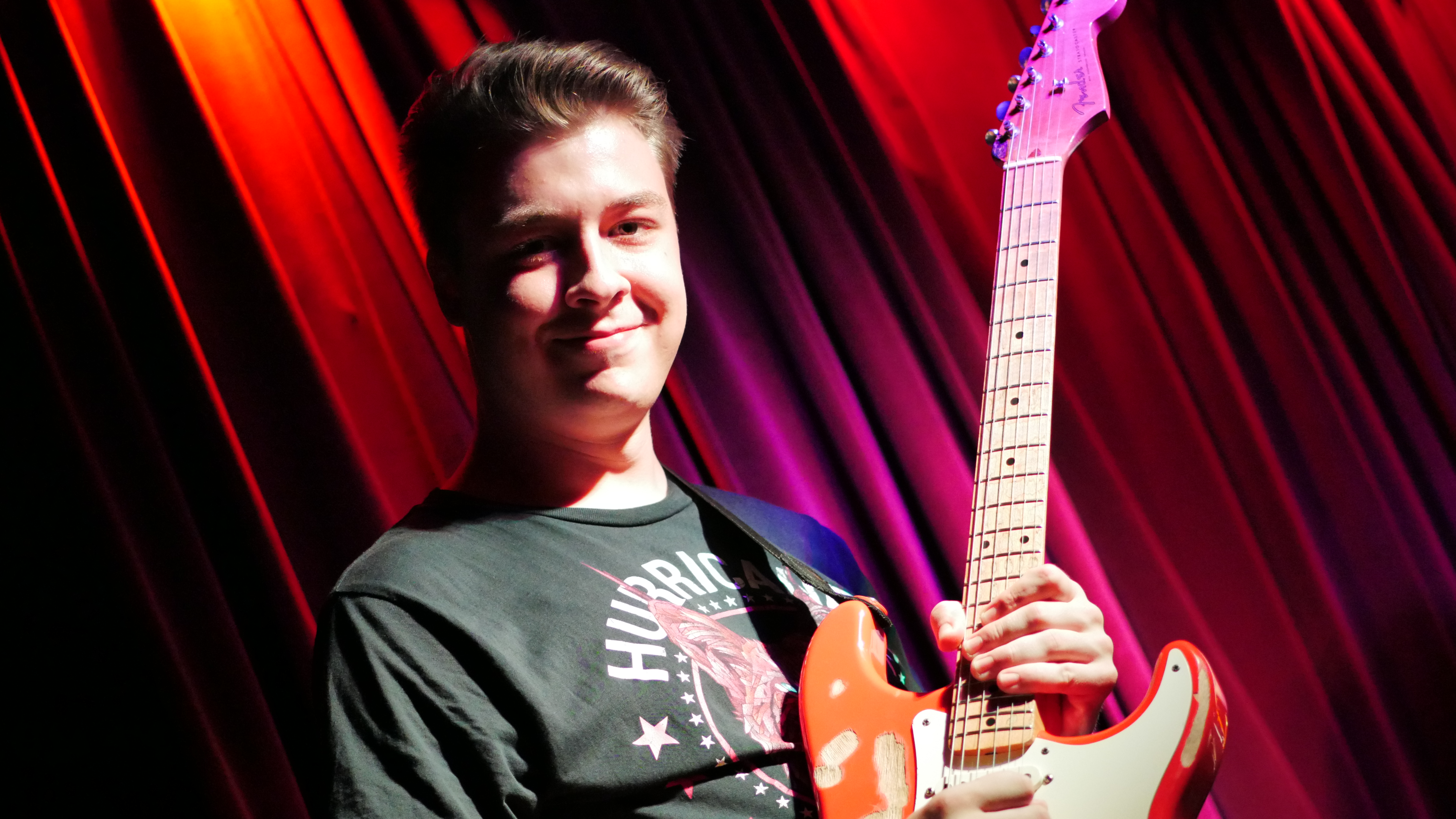 “When I was just starting out playing the guitar and writing some early songs, I used a blue Baltimore acoustic guitar. On this guitar I started playing some basic chords and scales that my father showed me how to play, since he is a guitarist like me. When I transitioned from acoustic to electric guitar when I was about seven or eight years old, I bought a tiny Line 6 Spider III electric guitar amplifier. I remember that it had a lot of effects, but not the ones I wanted, so my dad gave me an old Boss CE-2 Chorus which was around and I saved my pocket money to get a Morley Classic Wah. I also used a I also used a XT-2 Xtortion by Boss around this time period. I chose the Morley over a Cry Baby or a Vox wah because Steve Vai had a huge impact on my guitar playing when I was starting out. When it comes to guitars, I used my dad’s Gibson The Paul model and a very rare Ibanez RR electric guitar that my father gave to me as a present for my tenth birthday in 2008. But these where all guitars with two humbucker pickups and since I am a big fan of Eric Clapton, I wanted that Stratocaster-like clear sound from a single-coil pickup. I remember going to a music store in Radebeul and buying an Invasion model electric guitar that was customized for me. It had a rosewood fingerboard, two single coils and one humbucker pickup that you could split to yet another single coil pickup. I still have this guitar. It was the first one I bought with my own money. It is rather worn now, but it plays and sounds just great. The last edition to my then collection of guitars was a 2009 Fender Stratocaster which is a composite model as it features various parts from USA Stratocasters, a Masterbuilt neck by Greg Fessler and different pickups. This is the guitar I have used to most and is still my number one guitar today.

When I later formed my first band, which was called The Strafers, I bought a Marshall G30R CD amp and built a completely new pedalboard. I was still using the Morley Classic Wah pedal but I did not use the chorus anymore. Instead, I added a Boss DS-1 Distortion, a Boss OD-2 Turbo Overdrive (the old model), a Boss PH-2 Phaser pedal, a Boss HR-2 Harmonist, which I used as a light chorus, as well as a Digitech Whammy pedal. For our first gig, I also used a Boss ME-20 multi effects processor and an Ampeg SS 70 C from 1989. Then I decided to update my pedalboard again and just use the two distortions as well the wah, the phaser and the Marshall footswitch with a JCM 900 100 watt head along with a 4x12 JCM angled cabinet. Later, I used a Marshall MC212 with the Ampeg amplifier at home and tried out some other amps like a 1986 Marshall 5213 MOS-FET 100 Reverb Twin and a 1987 Fender 15 Red Knob, the Eric Clapton model.

For some early rehearsals and recording sessions I used two Marshall G30R CD amps. One model from 1998 and another one from 1999. I quickly bought a 1993 Marshall Valvestate S80 Stereo Chorus though, because I wanted the early nineties, clean, tube-sound with a spring reverb. I also built a completely new pedalboard featuring a Morley Bad Horsie first generation wah pedal, a Boss AW-2 Auto Wah, a Boss HR-2 Harmonist for the chorus or octave settings, an Ibanez Jemini Distortion pedal as well as a TC Electronic PolyTune Mini and a custom-built clean boost by Amp FX, a company from Berlin and a Palmer Germany power supply. At that point I built everything with SommerCable and used their products ever since. Later, AMP FX built me a true-bypass splitter box for my guitar signal which was added to the board in early 2018. For big shows, I used the JCM 100 with the 4x12 again and built a rack along with the keyboarder of my band Julius Weber. We built a vintage-style guitar effects rack and a Pete Cornish-like footswitch with one big multi-core cable to control the rack. That rack also had a couple of updates throughout the Funk Fragment 2017/2018 tour. On the board, there is the AMP FX clean boost built in, another Jemini Distortion and a Bad Horsie MK1 wah. For the rack system I use a Furman PL-8E Series II power supply, the Korg DTR-1 tuner, DBX 166XS compressor, a Digitech IPS 33B like Joe Satriani used, a Yamaha GEP 50, like Clapton used as well as a Dynacord CLS 222 and a Roland SDE-1000 Delay unit. In the back there is a Boss power supply which gets 9 volts through the multi-core cable to the front of my board to power the wah, the distortion and the AMP FX boost. I use the Harting and Hicon plugs and SommerCable for the whole system. As an external power unit, I use a couple of t.racks power supplies. In a smaller rack, I use yet another Furman power supply and a Line 6 Relay G 90 rack unit wireless system and their usual transmitters, antennas and cables for the system and the bodypack. For guitars, I used my old Strat and a Mexican Fiesta Red model as well as an Ibanez EW20ASE-NT for some short acoustic sets. For one gig, I used an Epiphone Broadway jazz guitar but mostly the Stratocasters.

For the 2019 tour I will use the Ibanez acoustic again as well as a Dobro Hound Dog. As for amps, I’m mostly using the PA or a small Fender Acoustasonic 40. For my pedalboard, I again added a Palmer power supply because it has got enough headroom. I added a Boss Tuner pedal and a TC Electronic Ditto X2 looper. In terms of cables and other gear, I used SommerCable again and always used the Ibanez Steve Vai signature picks in pink, brown and green. For slides, I use the Dunlop 218 medium glass slide. When we recorded the album there where a number of microphones used, including a Shure SM57. When I record some demos and home or just write music, I use the PreSonus USB audio box interface, a couple of Swissonic studio monitors, the iRig Keys 37 Pro master keyboard. I used to use a M-Audio KeyStation 88 and a Samson Graphite M25 in the past.

Here's a vlog of Funk Fragment's behind the scenes experience at Musikmesse.