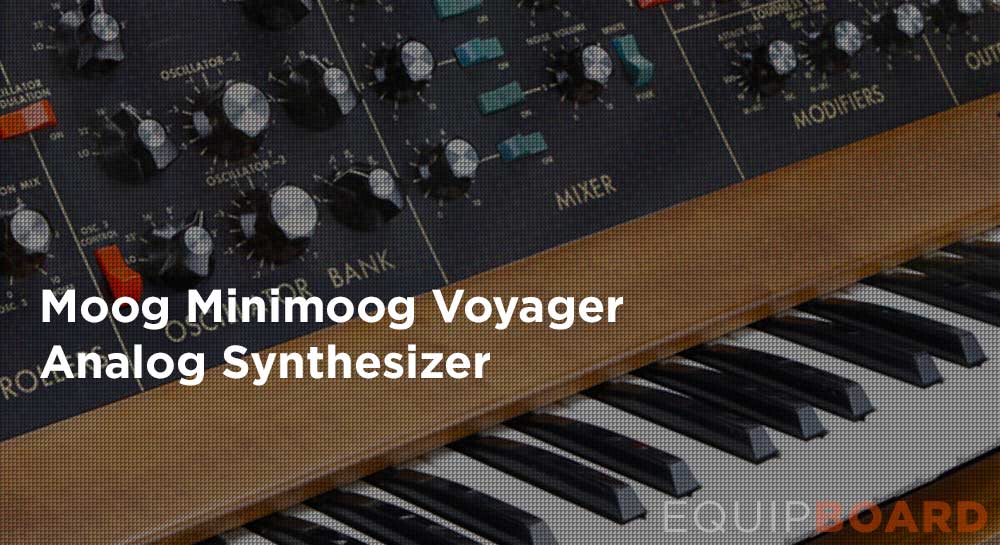 There are few names as synonymous with their field of expertise in music as Moog; Even those who are unfamiliar with keyboards will have heard the name and recognize it. Among professional musicians, most keyboardists will dream of playing a Minimoog. The last of these legendary synthesizers were produced in 1981, so anticipation was at fever pitch when Dr. Robert Moog himself revealed the brand new model in 2002 - the Minimoog Voyager.

You can hear Herb Deutsch speaking about the origin of the Voyager in this video.

The Voyager was met with an initially underwhelming response due to a few minor software flaws that required upgrades, but the issues were ironed out over the next decade, resulting in the Voyager becoming one of the most desired analogue synths of them all. While there are now several variations of the Minimoog Voyager on the market, most of them share the same fundamental specifications and features.

The standard Voyager's sound sources consist of three oscillators, an external signal input system and a noise generator, a five-channel mixer which passes the sound onto the filter stage and a trio of MIDI ports. Later models also included a USB port for instant integration, touch-pad and ribbon controllers, Alternative Gate sources and two modulation buses. The digital brain of the Voyager is a huge advantage of the synth's features. While it remains steadfastly an analogue instrument, the Mixer affords the player complete control over voltage and oscillator function and allows the user to save patches amongst other essential tasks.

It isn't hard to see why many users rate the Minimoog Voyager as the Holy Grail of analogue synthesizers. Later models improved on the standard model with added software updates and features, all encased in the classic Moog hand-finished wood cabinet.

The 2005 Rack Mount edition condenses all the features of the standard Voyager into a tabletop-sized version, while also adding features of later models such as an Input Accessory Port and switchable output mode. It also featured the electric blue backlit control panel, which utilized electroluminescent technology, that made the limited edition Electric Blue run so popular. The Select Series, which ran from 2006 to the present day, includes all of the features which made both the Electric Blue and the Rack Mount editions popular while allowing customers to customize the color of the backlighting.

The two most popular editions of the Voyager are the XL and the Old School. The latter is designed to look like the traditional 1970's Minimoog design and eschews digital controls for a pure analogue experience, while focussing on modulation capabilities. The XL is arguably the most powerful of all Voyager models, with a 61 - key, five - octave keyboard with velocity and aftertouch response which remembers the last key used.

So which Voyager is right for you? Let us know in the comments section below!