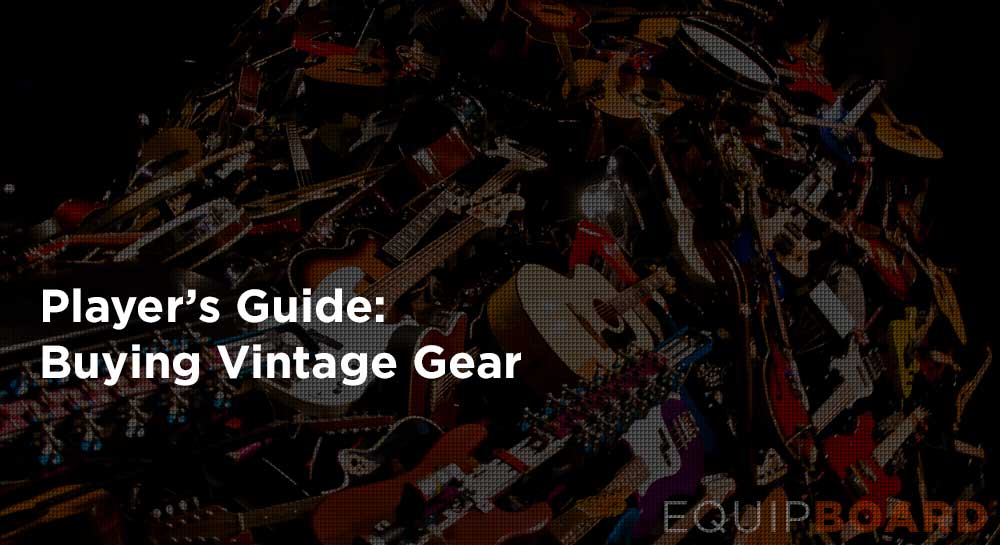 The 1959 Les Paul is arguably the most sought-after guitar in the world. There were only around 3,000 made, and their popularity with the A-list of guitar gods has made them unobtainable to the average working musician. Even a well-used example can fetch over a hundred thousand dollars on the open market.

Much is the same with vintage Fenders. It is not uncommon for a good condition Pre-CBS-Era Fender to fetch more than twenty thousand dollars.

Unfortunately, many of these instruments, which are regarded as some of the finest sounding electric guitars ever made, end up being bought up by collectors who keep them hanging on walls or in cases behind locked doors as they increase in value.

So what is a player to do if they want vintage gear but don’t have tens of thousands of dollars lying around? Here are some ways of getting what you want.

You want a vintage Gibson SG. You love the sound of the two humbuckers in the mahogany body, and you love the double-cutaway look. The problem is that you can’t find one for less than $1600 that is still in good condition. And that’s for an example from the 70s or 80s. For a ‘60s model you’ll be looking at twice the price tag!

Luckily for you, Gibson made a guitar very similar to the SG in the late 1970s called the ES-335S. This guitar was a solid-body ES335 shape with a body more similar in size to an SG. The double-humbucker configuration and mahogany body will deliver that are reminiscent of an SG, but not identical. It is not uncommon to find a good-condition ES-335S for around $1200.

Similarly, for those pining for a vintage Strat, but stuck to an even tighter budget, 1980s Squier stratocasters are usually high-quality vintage instruments that can often be found for $500 or less. Online forums have a tendency to overinflate the perceived value of these guitars, so do your research before you pay. Many players who own these guitars believe them to be worth much more than they actually are. While these guitars are often very good (and some will optimistically describe them as better than or equal to a modern American Fender) they do not carry the same market value as a Fender, so don’t be talked into paying that price.

Look For a Less-Collectable Year

It is common knowledge among the guitar community that pre-CBS era Fender guitars (From 1950 to 1965) are the most valuable. Behind the Pre-CBS Fenders are the guitars built from 1965 until 1970, During which time the classic nitrocellulose finish was changed to urethane and the 4-bolt neck joint was replaced with a 3-bolt neck joint. These guitars will still fetch a pretty penny on the market. 1970s Fenders are significantly less expensive than either of these. Often 1970s Fender Stratocasters and Telecasters can be found used for $1500-$3000, depending on originality and condition.

Another prime example of this can be found when looking at Fender’s amplifiers. In 1970, along with adding the 3-bolt neck joint to their guitars, Fender changed the circuitry in their amplifiers. This new circuitry, dubbed the “Silverface” era, is seen as inferior to the 1964-1969 Fender amplifiers, also known as the “Blackface” era. However, these amps are still vintage point-to-point hand-wired tube amplifiers that can be found at a fairly affordable price, often at less than a thousand dollars in comparison to the $1500-$2500 tag often seen on blackface Twin Reverbs and Super Reverbs.

Keep in mind that in many cases, it is better to buy a brand new guitar than to buy a similar vintage model from an off-era. A perfect example of this is CF Martin guitars. In the 1970s, Martin was building guitars which lacked adjustable truss rods, and thus suffered from warping over time. Also, many of these guitars, despite having been their sound played into them for forty years, lack the resonance of a brand new Martin. In many cases, a vintage guitar will be outshined by a brand new guitar at a fraction of the price. There are some instruments that were cheap and mediocre when they were new, and have only worn and rusted over the past forty or fifty years.

Look for a “Player’s Piece”

“Player’s Piece” is a term used to refer to otherwise collectible gear that are not in collectible condition. This may mean that there is excessive playwear, or that there has been some sort of modification done. By buying a Player’s Piece, you are buying a piece of gear whose market value you do not need to be worried about destroying. Vintage Rickenbackers or Gibsons that have had refinishes, Vintage Fenders with Floyd Rose vibrato systems installed, or any electric that has had the pickups or hardware replaced could be perfect examples.

Three years ago, I bought a 1966 Fender Bandmaster amplifier for $500. This amplifier, which originally came with a tube-driven tremolo circuit had had a spring reverb tank installed in the amplifier. This modification disabled the tremolo circuit and the “Normal” Channel of the amplifier. However, as I personally find spring reverb much more useful than tremolo, this modification made the amplifier more appealing to me, as the mod had been done by an electrical engineer. Ordinarily, this amp would have drawn several hundred dollars more than I paid for it, but due to it being a “Player’s Piece,” I scored a great deal on a prime-era vintage amplifier that suited my needs perfectly.

Best of all, as long as you don’t perform any irreversible modifications to your player’s piece that have not already been performed, and as long as you keep all of the original or valuable removed parts, there is little chance of further devaluing your gear. This leads to tremendous freedom in tonal capability. Remember, many of the most famous guitars in history have gone through a series of modifications over the years. David Gilmour’s famous black strat once sported a Khaler tremolo. Jimmy Page’s famous 1959 Les Pauls have had the neck profiles modified, the tuning machines replaced, and in some cases the pickups rewound. Geddy Lee’s favorite Fender Jazz Bass has had the neck replaced several times. Duane Allman’s 1959 Les Paul had the pickups replaced with the pickups from his 1957 goldtop Les Paul heard on the Layla, The Allman Brothers Band, and Idlewild South records.

Your guitar is your instrument and it is your right to do with it what you want. That being said, it is best not to destroy or damage another person’s future usage of something that is in short supply.

Many guitar makers and amplifier makers make reissues of vintage gear. Most notably, Fender, Gibson, Martin, Marshall, and Vox. While some internet forums may contain some complaints that the gear is not 100% to vintage spec, Most players will not be able to notice that the sanding sealer is a slightly different chemical compound than the sanding sealer used in the late 1950s or that the potentiometers are made by a different company.

By almost any player’s standards, vintage reissue gear made by a respectable company will be of superb build quality, possibly even eclipsing the build quality of vintage gear when it was new. This gear will also deliver identical or nearly identical specifications to the gear it replicates. Some companies take this further than others.

On one end of the spectrum, companies like Danelectro release their old models as “Vintage reissue” although finishing materials are different, build materials are different, and these guitars are crafted overseas. On the other end of the spectrum, Gibson and Fender put extreme levels of detail into their reissued guitars. Fender’s assembly line vintage reissues are built using the same machines as the vintage originals. Fender and Gibson’s custom shops both offer “relicing” or aging replication on vintage reissues. In the middle, Fender’s vintage reissue amplifiers use the same circuit layout as the originals, but use printed circuit boards instead of point-to-point hand-wiring. This difference in tone is noticeable, but in many cases negligible.

Best of all, vintage reissues can often be found on the used market. This is fortunate because they are very often the most expensive pieces of gear in a manufacturer’s range. However, they are still usually more affordable than real vintage guitars.

New for 2015, Gibson has created their most accurate line of vintage replica guitars to date. These instruments are accurate down to the composition of the plastics used for the pickup rings and scratchplate. They aren’t cheap, but they are affordable in comparison to the collector’s prices for the actual vintage gear.

Fender revised their line of USA-made vintage reissues in 2012 to be more accurate to specific model years. The bodies and necks of the guitars in this series are made on the same machines used to shape the guitars of Fender’s golden era. The finishes are authentic nitrocellulose lacquer, and the pickups are wound to vintage specification. Altogether, these guitars authentically recreate the feel of a vintage Fender. These models are production line Fenders, and not custom shop models. They command prices at the top of Fender’s standard model line, but not custom shop prices.

At the lower end of the price spectrum is the Danelectro ‘63, which is based on Danelectro’s famous amp-in-case guitar. Having examined some original Danelectros, I can safely say that the Dano reissues are of better build quality and will have better reliability than vintage originals.

Original Gretsches are hard to come by and are expensive. Often, they have been hard-played for years and suffer from tuning stability issues. If you can live with a chinese-made guitar with a polyurethane finish, the Gretsch Electromatic line is perfect for you. These guitars are of excellent quality, and sound almost as good as vintage Gretsches.

Relic guitars mimic the feel of a vintage original guitar, but will have the reliability of a brand new instrument. Fender does this very well. The necks on these guitars have a comfortable played-in feel, and they have a great vintage look. They are more affordable than a custom shop relic, or even an American Standard Fender.

Half drip-edge silverface Fender and half hot rod, the ‘68 custom line of Fenders is a perfect compromise between originality and usability. The Vibrolux is my favorite of these. At 40 watts, it is the most versatile size for a tube amplifier. Better yet, the channels on this amp are bridgeable like a vintage Fender or Marshall for a more robust tone.

Also new for 2015 is the AC10. This amplifier is not an exact copy of the original AC10, but will deliver chimey and growly Vox AC tones like a full-bore AC30 at a manageable volume. It is priced similarly to a Fender Blues Jr. or a Marshall DSL15. This represents exceptional value in the vintage-style amplifier market.

If Marshall crunch is what you’re after, there is no better amplifier for you than the 2555x. The Silver Jubilee is essentially a hot-rodded JCM800, and will give you the sweetest hottest gutsiest marshall tones. It does come at a steep price tag, although an authentic Marshall Silver Jubilee will cost much more.

The Ampeg SVT changed the world for bass players, and the reissue of the SVT captures that tone perfectly. It is, however, a little-known fact that the Rolling Stones used Ampeg SVTs live as guitar amps because of their extreme volume, which allowed them to play larger venues.

In Part 2, I will be discussing the vintage effects pedal market.