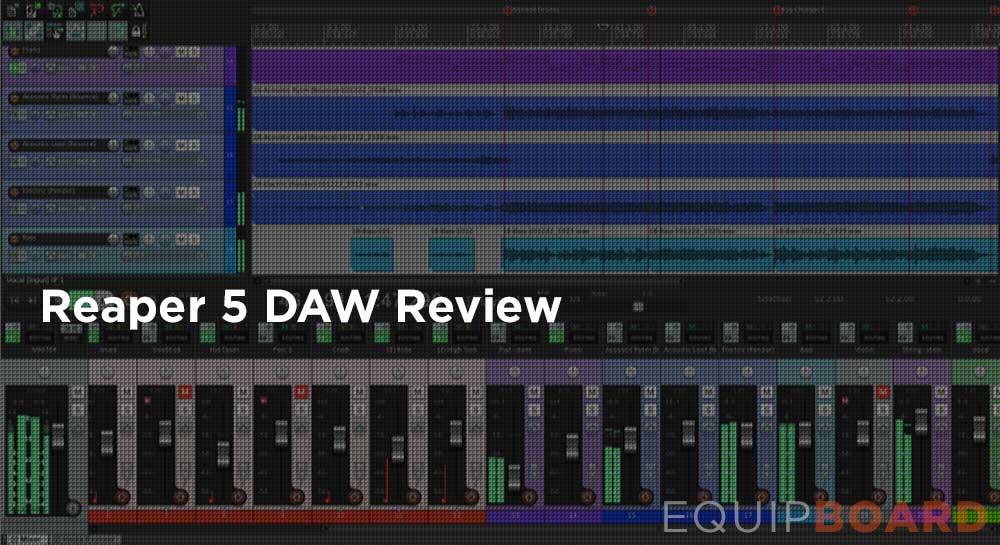 With loads of options today for music creation, you may not have heard of Reaper, touted as one of the most customizable and compact DAWs on the market. If you ask one of Reaper’s loyal users, you’ll likely hear about the features you’re missing out on with other mainstream DAWs. With Reaper 5 having just been released, there’s even more to love in this feature-rich DAW for professionals and beginners alike.

One track to rule them all

Reaper has plenty of noteworthy features, and a one major point is the flexible track system. There aren’t any pre-defined “track types” in Reaper as there are in Pro Tools or Logic, in which you choose between audio tracks, MIDI tracks and so on. Instead, you decide what you want a track to do as you go. Flexibility with tracks is endless, allowing you to use a track however you want, whether you want it for MIDI, audio, busses, virtual instruments, or effects returns.

Simple quirks about other DAWs are built into Reaper by default to save you time. For example, you can add multiple tracks without naming each of them for separate takes in the multiple tracks menu. If you need to walk away from your session but need to render audio, you won’t be forced to manually start all your renders at your desk, like in other DAWs. Just open the render queue and start adding to the list. Render queue even works across multiple projects, allowing you to render a whole collection of works. The biggest draw for Reaper users would without a doubt would be customization. Virtually anything that you want to modify in Reaper can be changed according to your needs. Windows such as the mix window, media browser, MIDI editor and others can be locked right into the docker, allowing you to view as much or as little on your main screen as you want. The toolbar docker window lets you add even more window docking capabilities in whatever location you’d like. Even the default toolbars allow for tools to be removed or added from them for ease of use.

Reaper’s real power comes in the form of actions. Reaper’s action list shows all the available actions that you can map to a keyboard or MIDI input. For example, if you’re often bypassing and enabling effects on a track to see how it affects a mix, it might be useful to assign that action to a key or MIDI signal. This allows for many different editing functions to be added to your workflow using your keyboard or MIDI controller. Actions can be chained to create a sequence of actions to get more finished in a simple command. You can even import and export shortcuts to share with others or move to other systems. Modifier keys (shift, control, alt, command) can be changed any way you like, just like keyboard shortcuts can be reassigned.

One tool that is not included directly with a download of Reaper but needs mentioning is the SWS Reaper Extension Installing this group of extensions adds many useful actions in one package, including easy track and item coloring menus, a notes window for tracks and regions, a window for common resources, markers that run actions when past during playback, and more to assist productivity. Community resources like the SWS Reaper Extension package is what really shows the power of customization within Reaper. Reaper has a large assortment of plug-ins included in the form of JS plugins (simple and compact plugins whose code can be directly modified) and VSTs made by Cockos. If you’re hungry for more plugins, check out the Reaper Stash on the Reaper website. Reaper’s built in plug-ins don’t look the most visually appealing, but you should never judge a book by its cover. All of Reaper’s plug-ins have a plain and straightforward layout and look.

ReaEQ is Reaper’s basic EQ. It starts out opening with 4 bands, but the flexibility of ReaEQ comes from adding or subtracting frequency bands as needed. Besides that, it is a straight forward EQ. The Reaper plugin environment has a handy wet/dry mix knob on each plugin window to give built-in blending control.

ReaVerb is a convolution reverb with lots of impulse response sample control. The plug-in doesn’t include much for impulse responses, so it requires bringing some of your own in. Once you have your own, you can add extra early reflections, trim and stretch the impulse, add high and low pass filters, and reverse the reverb.

Reaper’s website details every change that came about in version 5, most of which are small enhancements. Support for VST3 plugins has arrived, giving the user sample-accurate automation for rapid parameter changes and dynamic I/O configurations. Video projects can now be rendered out as a whole. Custom beat patterns can be played by the metronome. VCA track parameters can now be grouped. Many bugs have been squashed in Reaper 5 as well.

Come one, come all

What really sells many Reaper fans is Cockos’ business practices. Competing DAWs will have you forking out an arm and a leg for their basic versions, which may even include limitations on its uses, not to mention costs for upgrading upon the release of a new version. With Reaper, there’s one version for everyone; No limitations, no gimmicks. Professionals looking to run hundreds of tracks with generous amounts of plugins are welcome to test their hardware to its operating limits. Individuals working in small project studios or home setups get the same tools and tricks as everyone else. The beauty of Reaper is how all-inclusive it is, especially for the price. Take it for a full no-limits test drive for 60 days, and then purchase a individual license for $60. Each license covers you through the next version of Reaper and all the smaller updates along the way, ensuring you’re never left in the dust. Don’t worry about checking if Reaper supports your computer - Windows users from XP to Windows 10 are covered as are Mac users running OS X 10.5 through 10.10 are in great shape.

For new users giving Reaper their first try, make sure to start by looking at the Reaper User Guide. If you’re familiar with other DAWs, Reaper will be easy to pick up, but for more of the hidden power features you’ll want to start at the manual. The manual has a great basic explanation of Reaper’s included plugins, as well as instructions on using them.

The Reaper user forums are also a great place to visit, with many learning resources and users happy to help.

Reaper 5 proves to be another great release for Cockos with longtime users and new beginners, who are sure to enjoy the features. While the functional interface could use some more work on appealing design, you can count on themes to spruce up the wallpaper around the DAW. Users don’t have to learn to operate under the limitations of the program. Instead, Reaper provides the power to run the DAW and to make it your own. Once a workflow is established, Reaper proves to be a blazing fast creation tool that deserves more time in the spotlight.