Your First Gig: Must Have Accessories 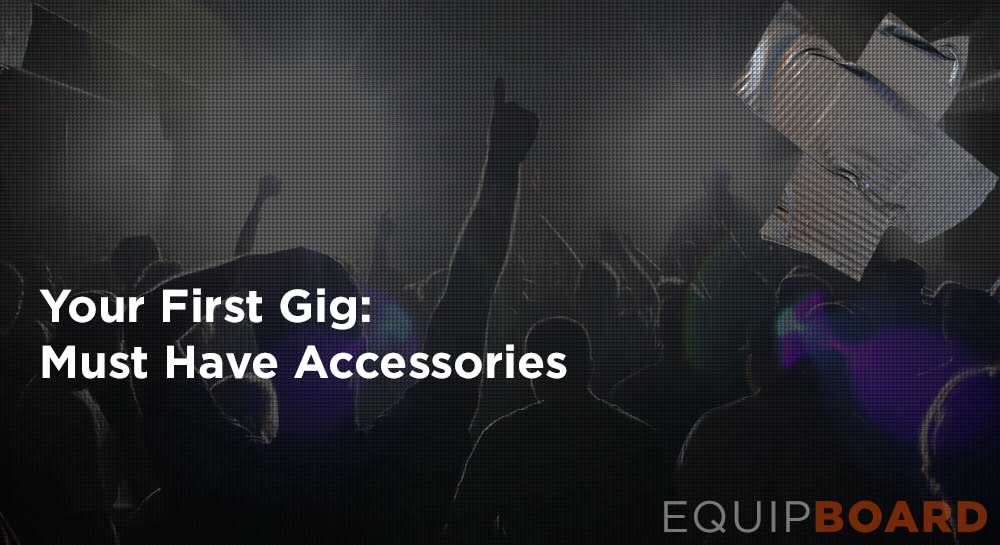 So you’ve got a band together, you’ve learned a few songs, and you’re ready to play your first show. Congratulations! But before you jump into the world of being a gigging musician, there are a few things you’ll need to have in your tool kit.

So most of this article is going to be about gear, but I’d like to start it off with a quick list of essentials that wouldn’t fit in the main section of the article.

One Extension Cord Per Electronic Device: Different stages and venues will have you set your gear up in different spots. Your amp and PA might be right next to an outlet, or the nearest outlet might be 20 feet away.

Power Strip: Sometimes a venue might not have very many available outlets, so it’s important to have a power strip so that everyone will have a spot to plug in.

Duct Tape: From taping down cords to a quick fix for a broken strap, duct tape is a must have for a gigging musician. You can also tape up your singer’s mouth when he/she starts to get lippy.

Pliers: If you’re lucky, you’ll never need a set of pliers during a show. But if things go really wrong, having a pair of pliers can make a lot of things easier.

A Towel: You know what’s really unpleasant? Sweat running down into your eyeballs while you’re trying to put on a show. And unless you have a headband handy odds are a towel is going to be your best bet in remedying the situation.

One Spare Set of Strings Per Instrument: Every musician reading this probably has a different brand/gauge they prefer, making recommending a specific brand a bit impractical. Regardless, bring along extra strings.

Extra Guitar Picks: Like strings, a musicians choice in guitar pick varies. So whatever your preferred brand is, make sure you bring extra.

Cables: So everyone has their favorite cable. Just make sure that you have at least one spare instrument cable, and one spare speaker cable. If you use a lot of pedals, you may also want to pack a couple of spare patch cables.

9-volt Batteries: A dead battery can ruin a show, so make sure you pack some spares.

Featuring a bright LED display, Poly Tune technology (which allows you to tune all six strings simultaneously) and chromatic tuning technology, the TC Electronic PolyTune is a must have accessory for any gigging musician. What’s great about this tuner is how fast and flexible it is, allowing you to select both flat tuning and different modes for a capoed instrument. The sturdy construction is also a plus, as it ensures that the tuner will never let you down when you need it most.

Why You Need It: Your instrument is going to go out of tune during your set. Under hot lights or the differing atmospheric conditions of the venue, your guitar will probably need to be retuned every eight or nine songs. So you’ll need a well built tuner that will work quietly and feature a bright display.

A design that’s been the choice of professional musicians everywhere for more than 35 years, the Shubb S1 Deluxe Acoustic Guitar Capo is more than capable of overcoming whatever challenges you have for it. And with the adjustable pressure setting, you can set the capo so that you won’t have to retune when you use it. The S1 is also made of high quality stainless steel, ensuring that the capo won’t let you down when you need it most.

Why You Need It: So if you’re an acoustic guitar player, you probably already have a capo. This was included for all of you electric players out there. A singer’s voice is pretty temperamental, so having the ability to easily change keys on the fly can do wonders if your singer is having issues. For instance, you can tune your guitar a half-step down and then leave your capo on the first fret. Then if you get to a song that’s too high for your singer that night, you can just take off the capo and play in a lower key. Also, though the capo is marketed towards acoustic players it will work just as well on an electric guitar.

Planet Waves has been one of the leading manufacturers of instrument accessories ever since the company’s inception. The Pro Winder is no exception to this trend, sporting an ergonomically designed bridge, an integrated bridge pin puller for acoustic instruments, and a mechanism that will fit almost every instrument.

Why You Need It: If you break a string you want to get it fixed as quickly as possible. The Planet Waves Pro Winder String Cutter will be a great asset in that regard.

Why You Need It: So provided you have a spare guitar handy, having a guitar stand will make switching instruments a lot faster. Having a stand isn’t a necessity, but it can help cut down on the time it takes you to get back to playing.

If you need a budget monitor, than the Nady PM-200A Live Sound Monitor is the product for you. This 150W personal monitor will be more than loud enough for small to mid-sized gigs. The monitor also sports a three band EQ, allowing musicians to dial in their preferred sound.

Why You Need It: So when you’re first starting out, you may not be playing venues that are experienced in providing live sound. The venue will probably have a fairly functional P.A., but they may not have a monitor. A monitor allows everyone in the band to hear themselves, and the quality of your show will suffer if you don’t have one.

Some Advice Before You Go

Though most of this article was about gear, I’m going to pass on some advice to you that every musician needs to know before they start gigging.

The Band That Tunes Together Stays Together

Ok, so electronic tuners are great, they really are. But there’s a limit to how accurate they can be, and there are quite a few things that can affect their performance. So before you step out onto the stage (or even during sound check) make sure that you check the tuning of your instrument against the others in the band.

You Live and Die by Your Reputation

You know those bands that show up late, or have members who are unpleasant to be around? They usually play in dive bars or coffee shops? You know where they’re going to be in five years? They’re still going to be playing dive bars and coffee shops. A good band that’s unreliable is going to get less work than an ok band with a good reputation. So be on time and treat people well. Especially the sound guy.

Would You Run A Marathon Drunk? If Not, Play Sober

Playing a gig is a pretty good workout, and if you want to do well you need to be on your game. Is having a shot or two to loosen up ok? Depending on your tolerance, sure. Provided you’re of legal age that is. But if you get blasted before a gig, odds are you’re not going to sound your best.

If this is your first gig, you’re probably not headlining anywhere. So be kind to the bands coming after you and don’t let your set run long. Sure, 15 minutes over may not seem like a lot, but it can throw off the whole night depending on how many bands are playing. Running short isn’t as big of a deal, but it can cause issues depending on when other bands will arrive.

When you’re starting out as a gigging musician, unfortunately there’s a pretty high initial investment. But hopefully with the information you’ve found here you’ll be able to make an educated choice as to what gear will be the best fit for you. Happy gigging!