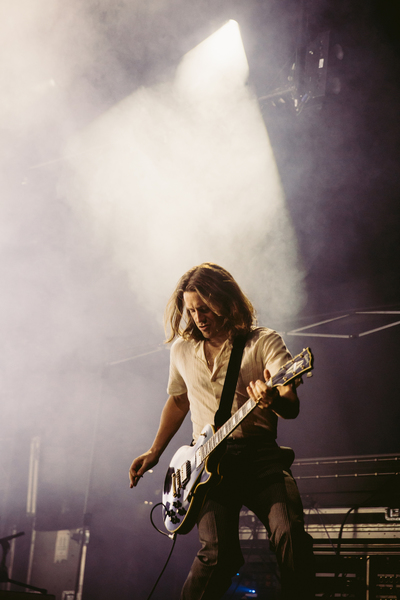 Jamie Cook plays a Gibson Les Paul during recording and live sessions when playing in Arctic Monkeys. Jamie seems to be a fan of Gibson guitars, playing a ES-335 in every tour and also a SG for AM. This Les Paul was first seen during the “Teddy Picker” music video. The music video features mainly footage of Arctic Monkeys recording the song in a live take. The guitar was seen played by Cook during the tour as well.

Alex Turner, the lead singer and lead guitarist of the band, played Jamie’s Guitar during the recording of the bands fourth album, “Suck It and See.” In an interview with producer of the mentioned album James Ford, he stated “Alex Turner's rig typically featured him playing his faithful Fender Bronco... or occasionally a Gibson Les Paul... through his crocodile‑skin Selmer Zodiac and '60s Magnatone amps. "’Al does more rhythmy stuff, and for that it was just pretty straight, quite bright and punchy into the Selmer. We sometimes ran that and his old Magnatone at the same time. It has a really nice vibrato on it and reverb. So sometimes we'd mix those two signals together, but just onto the one track.’”

Another section of the same interview with Ford, he mentions “A new sonic development for Arctic Monkeys on Suck It And See are the saturated Electro‑Harmonix Big Muff‑styled lead breaks that feature throughout — played mostly by Turner, but also by Jamie Cook. ‘It isn't a Big Muff actually,’ Ford points out. ‘But we were trying to get that Les Paul neck-pickup sound. They've got quite a few of those weird, boutiquey fuzz pedals that give you that warm, creamy fuzz, so we used that for the solos mainly. There was one called the Coopersonic Valve Slapper that we used quite a lot.’”

This interview mentions the use of Jamie’s Les Paul, as Turner was seen using the Gibson throughout that tour. Their next Album, AM, also features Alex playing this guitar. Seen throughout their live shows and pictures of the recording of the album.