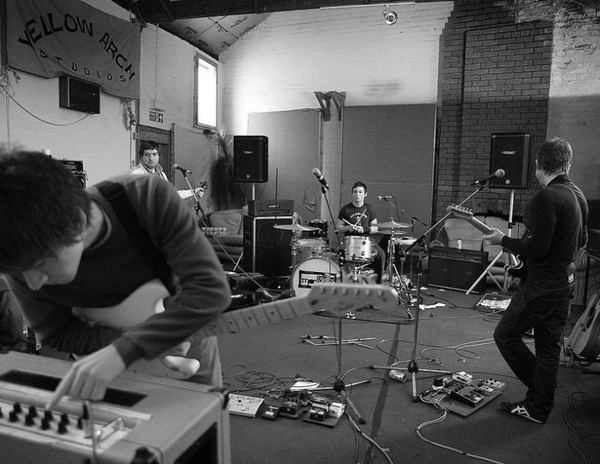 Jamie Cook plays a Roland JC-120 Jazz Chorus at various points during recording and live sessions for Arctic Monkeys. The Roland can first be seen during the recording of their first album pictured here next to Matt when the band practiced at Yellow Arch Studios. The Rolland can also be seen at different live shows during the Humbug era.

First introduced way back in 1975, the JC-120 Jazz Chorus is one of the few guitar amps that can truly be called a legend. Roland’s long-standing flagship is universally recognized by pros as the benchmark in clean guitar sound, and its rich tone and famous built-in stereo chorus effect have been heard on countless popular songs over its long history. Now celebrating 40 years of continuous production and counting, the JC-120 remains the undisputed “king of clean,” and the enduring choice of serious guitarists everywhere.

Jamie typically uses Hiwatt amps, which are known for their clean tones, similar to this Rolland.

Think this is more likely to be used for the keys?

Interested in Combo Guitar Amplifiers? Check out Our Gear Guides