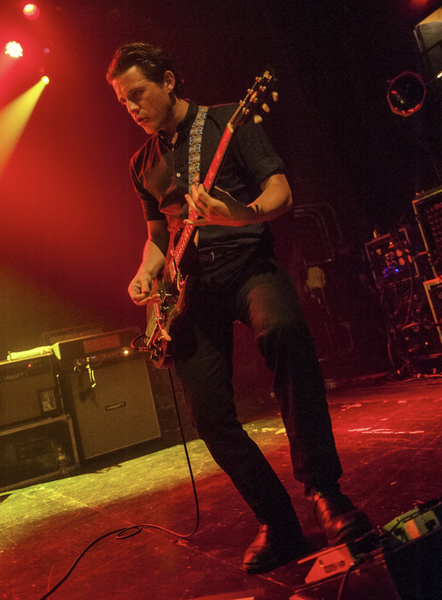 Jamie Cook can be seen endorsing a flashy, Marshall-esque head and cabinet boasting the Simms-Watts logotype. However, the amp is, in fact, a replica of the original, built by Rosewell amps, who have a history with Arctic Monkeys. Cook is known to have played through other amps by the brand, such as the Bluesman 30 on the band's 2011 album, Suck It And See. On Rosewell's website, under the item listing for the "Custom 100W Head", the amp-makers explain: "Rosewell amps have worked extensivley with Arctic Monkeys guitarist Jamie Cook building an repairing many of their amplifiers. When Jamie Cook started having problems with his original 1970s Simms-Watt head, Rosewell Amplification helped him to find the solution. The original Simms Watt amplifier was built on a very thin chassis causing it to bend and break components when the band were moving the amplifier from gig to gig. Rosewell built a direct clone of the original Simms amplifier on a strengthened chassis and this now is Jamie's go-to amplifier should the original Simms have problems or the band have a punishing overseas shedule."