Lemmy Kilmister's music gear is being tracked on Equipboard.

Equipboard's gear archive is collaboratively built and maintained by fellow music lovers like yourself. Anyone can submit gear and equipment to artists. Joining Equipboard also allows you to create your own list to track the gear you have and want, and follow artists like Lemmy Kilmister to never miss gear updates. 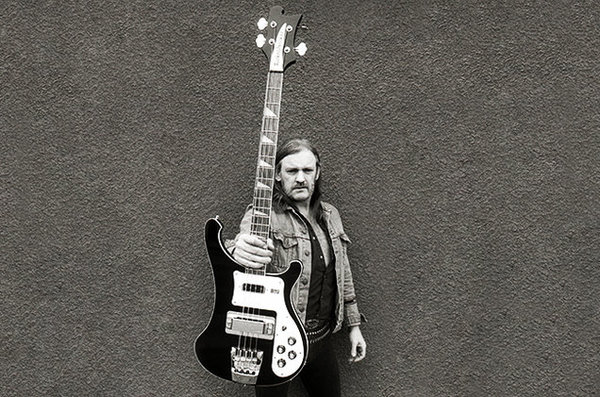 Prior to getting his signature model, Lemmy used several Rickenbacker 4000 series basses. As early as his time with Hawkwind, photos show Lemmy with a 4001 in "mapleglo" (natural) finish, already adorned with what appears (an educated guess based on Lemmy's interest in Nazi memorabilia and given the low quality of the photos by today's standards) to be a sticker of a Nazi Reichsadler on the pickguard. https://davidwills.files.wordpress.com/2009/09/bbspeakers03.jpg

Later photos and videos show Lemmy with another, altogether more iconic 4001 with a maple fretboard sporting star shaped inlays, a black pickguard and decals or stickers of an iron cross, some stars and the words "Born to lose, out to lunch". Since neither the fretboard nor the pickguard (and certainly not the stickers) were stock features of the Rickenbacker, this instrument was clearly heavily modified or custom. Motorhead's "The Young Ones" appearance, broadcast in May 1984, shows a bass featuring the "Born to lose, out to lunch" sticker, but with different inlays (conventional dots - the lowest three markers are large Nazi-era German air force crosses, but probably not actual inlays given the size and colouration, which includes the white outline) - most likely this same bass was Lemmy's primary instrument at the time and simply accumulated its various decorations over the course of the '80s.

Lemmy's bass tech, Tim Butcher, refers in one article to having added a fret to Lemmy's 4004LK signature; it appears the same modification was made to the "out to lunch" Ric - in several photos the fretboard either side of the final, uninlayed 21st fret (the 4001 bass usually has 20, and by the traditional pattern of inlaying the 21st fret would be marked) appears visibly darker than the rest of the board. Additionally, the fretboard extends slightly into what would normally be the pickguard. Supposedly, this extra fret is used for the song Metropolis. Since the recognisable modifications seem to appear in the '80s, and it's difficult to identify it with certainty with any pre-modification basses, it's not entirely clear whether this is, indeed, a 4001 model or a 4003, but given the level of modification it's probably a moot point.

Commenting and editing is limited to members of the Equipboard community.
Login to continue.
Submission Quality: Correct

The source and notes on this submission are correct.