Lenny Kravitz's music gear is being tracked on Equipboard. 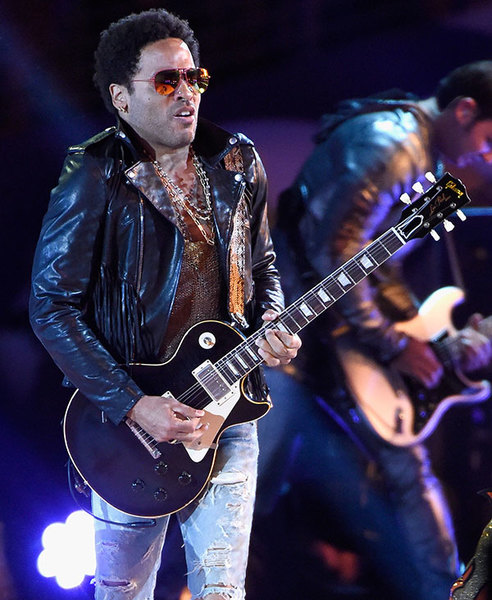 Gibson writes in this article "Ah, you’ve gotta love a killer guitar dropped into the middle of a massive sporting event. Prior to taking the stage at the Superbowl half-time performance with Katy Perry, Lenny Kravitz posted a picture to his social media accounts of himself holding a black Gibson Les Paul with the caption 'The guitar I'm playing tonight is the first of Gibson's 59 Black Over Flame Top series. Thank You @gibsonguitar. LK'"

Gibson writes about how this guitar came to be by writing "what is this guitar based on? Well, the story goes that once upon a time - a time called 1959 - a guitarist wanted a ‘Black Beauty’ Les Paul but he couldn’t stump up quite enough cash. So instead he had a 1959 Les Paul Standard painted black by Gibson. On close inspection the subtlest hints of the flamed maple underneath the black are visible. Mr. Joe Bonamassa has toured with this particular guitar. And now Lenny Kravitz has rocked the Superbowl with a replica of it."