Skrillex's music gear is being tracked on Equipboard. 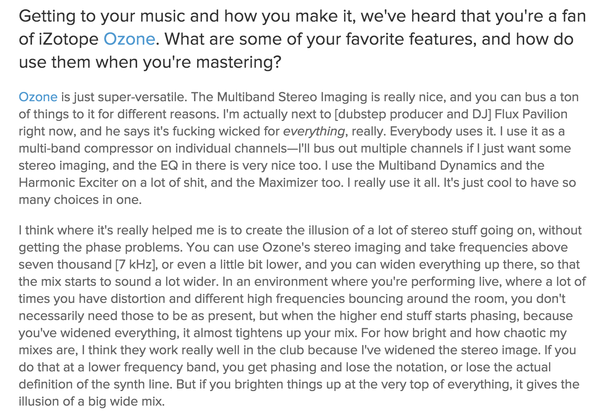 In an interview with iZotope, Skrillex talks about some of his favorite features of Ozone:

"Ozone is just super-versatile. The Multiband Stereo Imaging is really nice, and you can bus a ton of things to it for different reasons. I'm actually next to [dubstep producer and DJ] Flux Pavilion right now, and he says it's fucking wicked for everything, really. Everybody uses it. I use it as a multi-band compressor on individual channels—I'll bus out multiple channels if I just want some stereo imaging, and the EQ in there is very nice too. I use the Multiband Dynamics and the Harmonic Exciter on a lot of shit, and the Maximizer too. I really use it all. It's just cool to have so many choices in one.

I think where it's really helped me is to create the illusion of a lot of stereo stuff going on, without getting the phase problems. You can use Ozone's stereo imaging and take frequencies above seven thousand [7 kHz], or even a little bit lower, and you can widen everything up there, so that the mix starts to sound a lot wider. In an environment where you're performing live, where a lot of times you have distortion and different high frequencies bouncing around the room, you don't necessarily need those to be as present, but when the higher end stuff starts phasing, because you've widened everything, it almost tightens up your mix. For how bright and how chaotic my mixes are, I think they work really well in the club because I've widened the stereo image. If you do that at a lower frequency band, you get phasing and lose the notation, or lose the actual definition of the synth line. But if you brighten things up at the very top of everything, it gives the illusion of a big wide mix."

The original interview can be found here.

In an interview with MusicRadar from November 2011, Skrillex says his mastering chain "literally consists of an iZotope Maximizer, maybe with a little bit of EQ and harmonic excitement, but that's it." The Maximizer is part of the complete Ozone software package.