Stan Lynch's music gear is being tracked on Equipboard.

Equipboard's gear archive is collaboratively built and maintained by fellow music lovers like yourself. Anyone can submit gear and equipment to artists. Joining Equipboard also allows you to create your own list to track the gear you have and want, and follow artists like Stan Lynch to never miss gear updates. 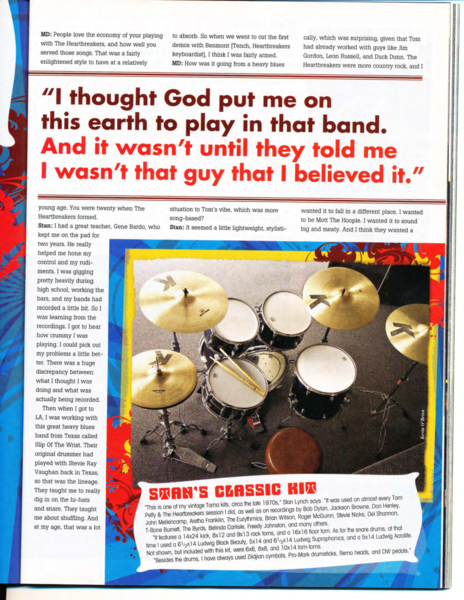 Mentioned by Lynch in this May 2008 Modern Drummer Magazine interview. It is visible under Lynch's snare.

"This is one of my vintage Tama kits, circa the late 1970s," Stan Lynch says. "It was used on almost every Tom Petty & The Heartbreakers session I did, as well as on recordings by Bob Dylan, Jackson Browne, Don Henley, John Mellencamp, Aretha Franklin, The Eurythmics, Brian Wilson, Roger McGuinn, Stevie Nicks, Del Shannon, T-Bone Burnett, The Byrds, Belinda Carlisle, Freedy Johnston, and many others.

"Besides the drums, I have always used Zildjian cymbals, Pro-Mark drumsticks, Remo heads, and DW pedals."

Commenting and editing is limited to members of the Equipboard community.
Login to continue.
Submission Quality: Needs Review

This submission is either new or has been edited, and needs its quality rating updated.

Interested in Drum Set Accessories? Check out Our Gear Guides