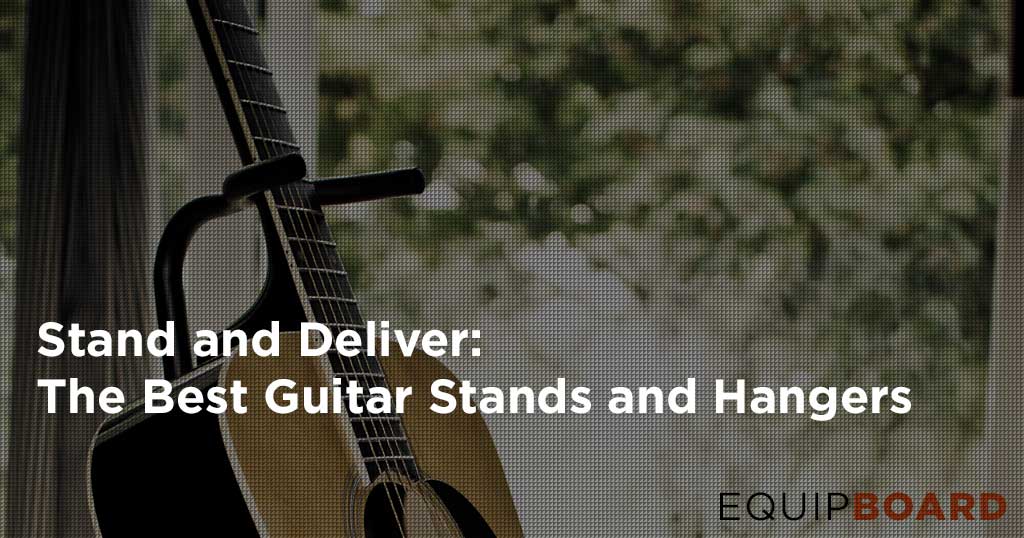 Why Would I Need a Guitar Stand?

If you play guitar, you should have both a good quality guitar stand. A guitar stand lets you keep your guitar out while keeping it relatively safe.

It’s kind of a luxury, but once you have one you won’t ever want to go back to doing without. Imagine this, you’re sitting in your practice room hunched over your guitar running through some exercises and someone calls you from the other room. Where do you put your guitar? You can put it on a chair, but what if in your hurry to see what all the commotion is about you put it on the chair in such a way that it will go careening into the floor as soon as you set a foot out of the door. I’ve personally done this a time or two, and while it generally doesn’t hurt the guitar too bad it leads to some pretty ugly gashes in the finish.

This is just one of the many situations where a guitar stand can save you some big bucks. And all things considered, they really are pretty inexpensive.

Established in 1979 by The Music People, Inc., On-Stage is the company behind what are arguably the most widely used instrument and instrument equipment stands in history. They’re one of the nation’s leading suppliers of stands, and the products they produce have been used in studios and on stages the world over.

Since the brand’s inception, On-Stage has expanded their line of product into eight distinct categories: Guitar, Microphone, Keyboard, Workstation, Rack/Amp/Mixer, Speaker, Lighting, and Band/Orchestra. Every product produced by the company focuses on affordability and durability, making them a great choice for any musician.

A great example of the company’s dedication to providing products for working and hobbyist musicians alike is the On-Stage XCG4 Black Tripod Guitar Stand. To learn more about how this stand compares to the competition, check out the specifications below.

The most notable feature of this stand is that it has what can only be described as a “guitar catcher.” Essentially, this holds the guitar’s neck inside of the stand which prevents it from tipping forward onto the ground. This alone is makes this stand worth serious consideration, because there are certain designs (Gibson’s angled headstock in particular) which are very sensitive to falls.

Obviously, this stand is a tripod. Every musician has their preference, but no one would argue that the tripod design offers the greatest amount of both stability and portability. You’re not going to have to worry about the stand falling over, and because of its design it’s very easy to throw in the backseat of a car or carry.

Lastly, every surface on the stand is padded with Velveteen rubber. This is going to be fine with the majority of guitars, but if you happen to have an instrument with a nitro finish you may want to consider covering these surfaces with fabric (an old t-shirt would work great for this purpose).

The affordability of the stand is pretty impressive for the quality of the product, and for the price it really does do a good job of functioning as intended. It’s hard to knock this stand for having a few quirks considering the fact that many stands in this price range are incredibly unreliable. There are stands available that have different features which may work better for your situation, but we wouldn’t state that there are any alternative stands in this price range that are objectively better than the XCG4.

The On-Stage XCG4 Guitar Stand is a very affordable stand that does a great job of fulfilling its intended purpose.

ChromaCast is a company that produces a staggering variety of musical instrument accessories for people on a budget. The company is so pervasive that even if you’re not familiar with the name itself odds are either you or someone you know has used one of their products extensively.

While the company’s products are never going to capture the hearts and imaginations of musicians like Fender or Gibson, they do provide a very valuable service regardless. A perfect example of this is the ChromaCast CC-MINIGS Universal Folding Guitar Stand with Secure Lock.

The most notable thing about this guitar stand is that it’s an a-frame configuration. Essentially, this design is simply an a-shape that cradles the bottom of your guitar while the neck joint/upper body lays against the upper part of the stand. While this design may not appear as reliable as a bigger stand, it really functions well.

The main reason to buy an a-stand for your guitar is its portability. It’s a great fit if you’re taking it to a lesson or a band practice, because since there’s so little material involved in the stand it’s light enough to easily carry. It’s also a pretty small device, so it can fit in the front pocket of some gig bags.

An important feature of the stand is that it comes with rubber feet. Some cheaper stands either don’t feature padded feet or the padding they use isn’t grippy enough to keep the stand from sliding around, which can end up being pretty catastrophic. The CC-MINIGS’s padding functions as one would expect, and is very well suited to the task at hand.

Something that should be stated, while not a flaw, is that the stand can damage nitro finishes (like what you’d commonly find on a Gibson Les Paul). Most plastic stands tend to do this, so it’s more just something to be aware of in general. This problem can be avoided by something as simple as covering the rubber portions with a cloth (an old t-shirt would work extremely well for this purpose).

This is a great stand, so long as you don’t mind that it leans your guitar pretty far back. The stand will also accommodate a variety of guitar body styles, so as long as you have something bigger than a soprano ukulele you should be in good shape. The ChromaCast CC-MINIGS Universal Folding Guitar Stand with Secure Lock is a viable option for any musician looking for an affordable and portable a-style guitar stand.

Guitar stands are an incredibly useful product, and in all reality if you don’t have one you’re doing yourself a real disservice. With that being said, while guitar stands are a very important piece of gear to have they do have their limits.

While many guitarists may only gig with one or two guitars at a time, there are many (especially working bands who mainly play covers for parties or weddings) who need a variety of guitars at their disposal that they can quickly change between with a minimal amount of hassle.

Having one or two guitar stands doesn’t really take up that much space, but once you get to the point where you have three or four on hand at any one time you start to run into some issues. Thankfully, if you’re in this situation you have a variety of solutions. One such solution is the Hercules Stands GS525B Five-Instrument Guitar Rack.

With that out of the way, another notable feature of this stand is that it’s padded with Specially Formulated Foam (SFF). This foam is designed to not react with the majority of common guitar finishes, so it’s one of the few stands available that can be easily used in conjunction with a guitar that has a nitro finish.

Lastly, the stand is also intended to be used for both electric and acoustic instruments. So you won’t have to worry about having enough room to store both types of guitars if you need to be able to easily switch between them. You can also adjust the space between the stands, so if you need more or less space you’re not stuck with the product’s initial dimensions.

Another commonly cited feature of the unit is that set-up is reportedly very easy and intuitive. This is an advantage the Hercules stand has over a lot of its competitors, which while not too complicated can be a bit tricky to assemble in a way that securely holds your instrument.

The Hercules is a great option for those that need a stand to hold multiple guitars or are planning to build out their collection but still want their guitars accessible.

Founded in 2000 by father-daughter team Jerry Freed and Crystal Morris, Gator Cases has quickly become one of the most widely respected manufacturers of instrument cases currently in operation. The company fills a niche that few ever had by offering an alternative case for any electric guitar that offered a higher degree of durability while still remaining affordable.

The company actually has pretty humble roots. When they first started Gator Cases all they had to their name was a few different models of electric guitar cases, a handful of which they took to the 2000 Summer NAMM show in Nashville, Tennessee. Since then the line has grown to encompass more than 1000 different products made from everything to vacuum-formed plastic cases to guitar stands.

Speaking of which, while Gator is known for their guitar cases every product they make is engineered to a similar degree of quality. The most obvious thing about this stand is that it’s intended to hold two guitars simultaneously. This is a huge plus to gigging musicians who need a stand for both their main guitar and its backup. The stand also doesn’t have all that large of a footprint, and will definitely save on space when compared to using two individual stands.

This stand is also infinitely more portable than the larger rack units that some musicians use, which really aren’t all that practical for those of us who don’t have a truck or van at our disposal. The stand is also built with materials that are good for the price point. The stand also comes with a neck restraint in both positions, which will definitely help to ease your mind if you plan on using this stand during a live performance.

Lastly, the stand can be used with both an acoustic and an electric guitar. It’s also large enough to fit an electric bass guitar. You can also adjust the height of the neck cradle if you happen to have a guitar that’s significantly longer or shorter than a standard model. The stand has a lot of utility, and seems to be well finished aesthetically with an attractive matte black. Gator does offer a three-year warranty on all of their products. So should you happen to experience any issues you can have it replaced.

The Gator GFW-GTR-2000 Frameworks Guitar Stand is a good value for the musician looking for a stand that can hold two guitars simultaneously.