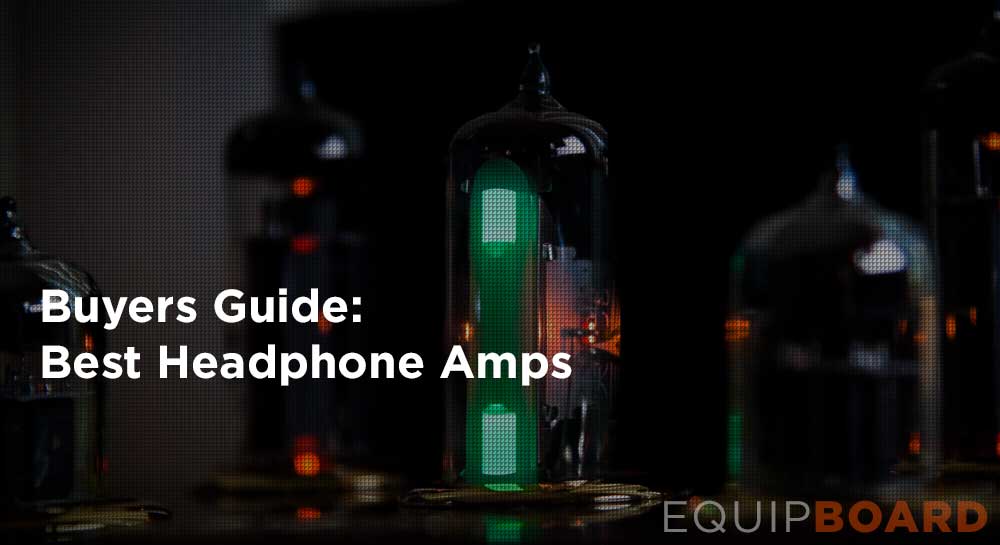 Headphone amplifiers have the potential to drastically improve the sound of your headphones.

What Does A Headphone Amp Do?

Headphone amplifiers drive the speakers in your headphones by boosting the audio signal.

The most important thing about a headphone amplifier is that it keeps you from getting distortion during “peaks” in your music when paired with proper headphones. Have you ever noticed that when you’re jamming out to a song that get’s a bit loud it can cause your headphones to distort?

Aside from just being annoying, this actually prevents you from being able to pick out a lot of the intricacies of the song that you would be able to otherwise.

A DAC (Digital-to-Analog converter) is what transforms digital music files into sound. However, DACs don’t usually output a signal strong enough to actually listen to.

Unless you’re ready to really invest into getting the best sound possible, I would hold off on getting a standalone DAC. Though laptops and phones generally don’t use great DACs, the main things holding back the sound quality of your music are most likely your headphone amplifier and the headphones themselves.

Neither option is objectively better than the other. A tube headphone amp may (or may not) sound better than a solid-state depending on the model, but it’s likely going to be more expensive and require more maintenance.

Solid-state amplifiers may be a bit more rugged, but you don’t have the option to easily change out main components (like the tubes in a tube amplifier) in order to change the voicing of your headphone amp.

Established in 2007, FiiO has one goal: to raise the reputation of “Made in China.” FiiO Electronics Technology has quickly gained a reputation as being one of the best entry-level manufacturers of quality digital audio solutions. The company produces a variety of products that are both fairly price and feature rich for the investment. This brings us to the FiiO A3 portable headphone amplifier.

The A3 emphasizes portability and efficiency and is able to cover headphones with an impedance range of 16-150 ohms. It has a max power of 450 mW at 16 ohms and 270 mW at 32 ohms. It also features a frequency response range that spans from 20 Hz to 20 kHz.

The outer casing is made from brushed aluminum and feels solid. The battery life of the unit is also a selling point, featuring a 1400 mAh battery that has an estimated usage time of 16 hours.

The unit comes with a variable gain control, a low and high gain switch, as well as the aforementioned bass boost. All of the switches are laid out in an intuitive manner and are very easy to manipulate from a variety of positions. It’s a great fit for burgeoning audiophiles looking to get the best sound possible with the combination of devices they have on hand for a relatively low initial investment.

We aren’t a fan of the fact that you can’t use the device while it’s charging. Having said that, the FiiO A3 Portable Headphone Amplifier is a good buy for those looking to get into more advanced audio technology.

Established in 2010, Bravo Audio is one of the more recent high-end audio companies to pop up on the market. The brand is focused on delivering high-performance headphone amplifiers that are both affordable and diminutive, resulting in a high-quality product that doesn’t take up too much valuable real-estate in your listening area of choice.

The most controversial design decision taken with the Audio V2 is that the design is pretty much entirely open. The good part of this is that there’s a definite “cool” factor with being able to see all of the components, but the con is that the open design does make it more vulnerable to spills and dust.

Another thing to be aware of is that the V2 is a hybrid design. Hybrid amps are exactly what they sound like, they combine elements of tube and solid state construction for a sound that is somewhere in between the two.

The V2 is simple. It comes with a standard 3.5mm jack and RCA stereo inputs. It also has a variable gain control, allowing you to dial in the amount of gain that works with your headphones.

One of the oldest audio companies still in operation, Beyerdynamic is widely hailed for their range of quality audio products. They’ve actually been around since the mid-1920s, and were an innovator in the then beginning cinema industry. Their first products were actually loudspeakers which were used in conjunction with early films. They also developed the world’s first dynamic headphones in 1930, though shortly thereafter the company’s production was halted by WWII.

Beyerdynamic stepped onto the market once again in 1948. In addition to their previously established products the company soon began designing microphones, among which was one of the earliest wireless microphones. This microphone was actually used by The Beatles during their 1966 tour of Germany.

Beyerdynamic has established a legacy as one of the world’s premier manufacturers of high-end audio equipment, and the Beyerdynamic A20 Headphone Amplifier is a worthy addition to their line of products.

The A20 headphone amplifier uses Surface Mount Technology (SMT). This helps to reduce the space the circuit takes up, resulting in a unit that has a much smaller footprint. The unit’s diminutive size makes it a great fit for more cramped areas, so it’s definitely worth a look if you’re short on space but still want a high-end headphone amplifier.

It doesn’t have a setting for high and low output, which means you should use cautioon when adjusting the gain. The unit is housed in a brushed aluminum chassis designed to be both durable and resonance free. Overall, it’s a pretty solid feeling (if a bit heavy) unit.

The A20 sounds very neutral (not imparting heavy levels of bass, mids, or treble) yet dynamic. The Beyerdynamic A20 Headphone Amplifier is well worth the cost for serious audiophiles.

While the A20 is a very solidly built unit, should you happen to experience any flaws in materials or workmanship you can send return it and receive a replacement unit.

Founded in 2010 by Jason Stoddard and Mike Moffat, Schiit is among the recent wave of companies attempting to market high-end audio equipment to people who are unable to afford vintage examples. The company has set itself apart from its competitors by maintaining a commitment to analog construction, which a majority of audiophiles believe to be the superior method to attaining a high-fidelity of sound.

Schiit overbuilds everything they make. The Magni 2 is sopecifically designed to pair well with any headphone, featuring a high gain mode and a low gain mode in addition to the inclusion of a variable gain switch.

The Magni 2 produces a sound that’s more detailed and clear than your standard sound card. The Magni 2 does not have a bass boost circuit. For the price point its a very good value and the unit pairs with the majority of headphones.

Everything (with the exception of the wall warts) on the Magni 2 is made in America. It comes with a 6.35mm input jack as opposed to a 3.5mm, so if you’re using a pair of headphones with a 6.35mm male end you’re going to want an adapter.

Lastly, the Magni 2 comes with a 2-year manufacturer’s warranty. This warranty covers parts and workmanship, so should you happen to experience any issues you can send the unit in for a replacement.

The Magni 2 is a great entry level option for beginning audiophiles.

Founded in 1989 by Marilyn and David Francesco, the Rolls Corporation has gained critical acclaim in the audio technology market. The company has produced a variety of products that have earned them accolades from professionals and hobbyists alike, namely their line of signal mixers, signal sources, and interface accessories. During their tenure in the industry they’ve also manufactured rack units for studio and gigging musicians as well as a variety of different effects units.

The Rolls PM50s Personal Monitor Amplifier's high level of quality and its low initial investment makes it a great option for any musician on the hunt for a headphone amplifier that won’t break the bank.

The PM50 is that it’s a combination mixer and headphone amplifier intended to be used in recording applications. It’s intended to fix monitor issues where a musician (typically a vocalist) isn’t able to hear themselves well enough to be confident in their performance. With that being said it will still function as a headphone amplifier, but because it doesn’t have a standard AUX cord (it has ¼” jacks) you’re going to need to get an adapter if you intend on using it for a cellphone or computer.

The unit is that it’s very durable, making it a good fit for hobbyist studios that need to be set up and taken down frequently. The jacks and components are also very securely attached, so if you happen to be looking to travel with the unit you’re not going to have to worry about it failing.

The adapter is a bit short, which can be inconvenient in situations where you may not be able to place the device right next to an outlet.

The PM50s does come with a year-long warranty that protects against errors in workmanship or materials.

Lastly, the controls are very simple and intuitive to use. The simplicity of this design makes the unit a good fit for beginners who aren’t very experienced with this type of equipment.

The Rolls PM50s Personal Monitor Amplifier is a great fit for hobbyist recording studios, but because its intended for recording applications we wouldn’t recommend it to any musician looking to boost the sound quality of their headphones or listening device.