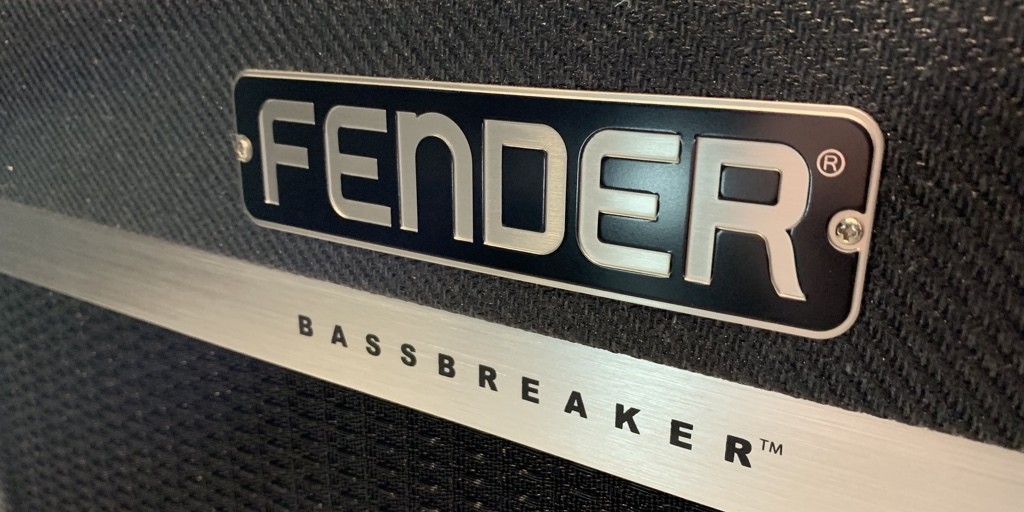 I ordered the Bassbreaker direct from Fender's website, and it promptly arrived well packed in a Fender branded cardboard box. Upon opening, I was greeted with this beauty.

The Bassbreaker is striking. When I pulled it out the box, the first thing that caught my eye was the color. The grey tweed looks great. It is neutral and the logo Fender chose is an update to their vintage box design. I also noticed the amp jewel is a brilliant white, which feels more modern than the reds and ambers Fender has used in the past.

My overall impression was how refreshing the amp looked. When I think of Fender amps, my brain can’t help but conjure images of silver or black control panels with silver grill cloth or some tweed. This bears no resemblance to those amps.

From the first time I laid hands on this amp, I was impressed with the quality. The proper tweed looks great, the knobs are neutral and smooth, and the grill cloth is simple but attractive. The black leather with white stitching handle adds a touch of class as well.

You can view the five tubes and the 12" Celestion G12V-70 speaker through the back. The unit is made in Mexico alongside Fender's other lines and seems to be assembled flawlessly. In short, the premier quality seems consistent with what we've come to expect from Fender.

It has three different gain structures that provide distinct voicings. I’m a big fan of all of them.

You can tell Fender used the same tubes (3 x 12AX7s and 2 x EL84s) very differently from how they are employed in their Blues Junior. Even on the low gain structure, this is a drastic departure from traditional shimmering cleans and is more “Atlantic voiced.” However, this amp doesn’t sound like a Marshall clone. It certainly is a step in that direction, but it still retains enough of its own character to sound distinctly different. The cleans are crisp and sound very tight, but that is not why this amp is great. In fact, although the Bassbreaker does cleans well, if you’re mostly or exclusively interested in pristine cleans, I’d steer you toward the Blues Junior. The Bassbreaker is more purpose built for rock.

My favorite voicing is the medium gain stage, which can accomplish an amazing crunch tone. It sounds full and has so much sustain. I’m amazed at how warm it sounds, even at lower volumes. I was able to get decent breakup at volumes that weren't shaking the windows.

If you really want to get wooly, switch it into high gain and with the master high you get a huge hard rock sound. Here you can really dial up the saturation. The amp delivered amazing classic and modern rock tones with gain that nothing short of astounding. The amp drive is phenomenal and really sets the Bassbreaker apart from other amps in Fender’s line.

On the whole, I would say the amp is bass heavy, and I found my favorite tones regardless of gain structure was when I dialed up the mids and trebles in relation to the bass. There is also a bright switch, which you can use to boost the treble.

The one thing I’m not a huge fan of is the onboard reverb. It’s not bad necessarily; it is just not the reverb sound I favor. It’s a digital hall sounding reverb, which is very different from the spring reverb of traditional Fender amp tanks. I should also say the reverb is very forward. Even at very low settings, it is present. Again, it is not bad; it is just a specific type of modern reverb that sounds quasi-modulated and works best with higher gain. I just couldn’t find a setting where I liked the onboard reverb more than one of my trusty pedal 'verbs.

And speaking of pedals, there is an effects loop for stompbox junkies. Another thoughtful feature Fender has included is a power amp mute switch, which mutes the speaker and makes the amp jewel blink rather than stay illuminated. There is also a switchable speaker-emulated XLR line output, which you can record direct with, and a ground lift switch.

I am a big fan of the Bassbreaker. Its 15 watts is loud enough for small gigs, and still sounds warm at bedroom levels. It is a versatile all tube amp that features some of the finest gain sounds Fender has ever produced. Fender calls the Bassbreaker “sonically flexible.” I would have to agree, and it is awesome to see the company do something other than the clean sound we all know so well. The Bassbreaker 15 is an excellent low wattage amp from Fender that is one of the most tonally versatile offerings the company has ever made.