Fender Play vs. Yousician - Is a Video Game Better Than Video Lessons? 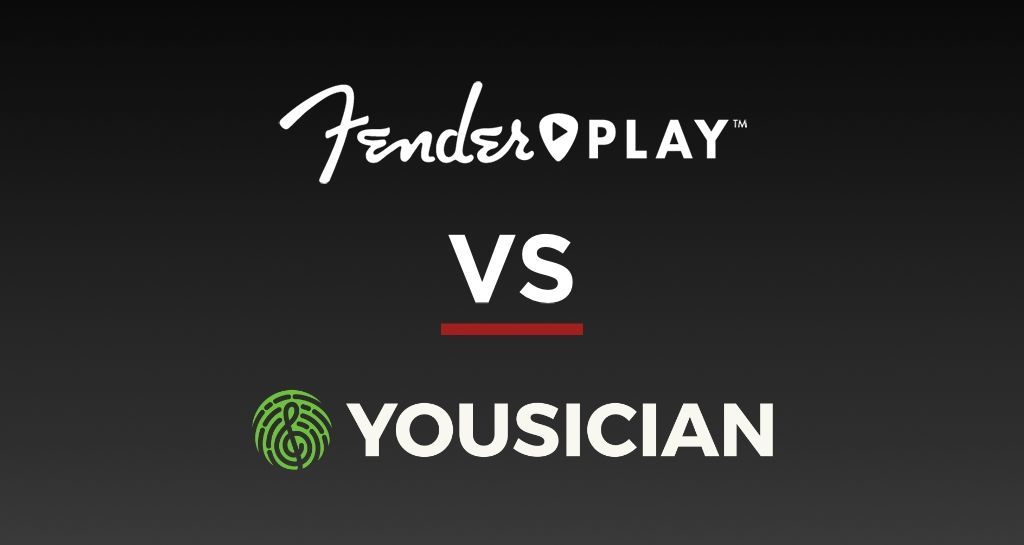 If you’re interested in learning or improving your guitar skills (or bass guitar or ukulele) and are considering Fender Play and Yousician, you’ve come to the right place.

The biggest similarity between Fender Play and Yousician is they’re both aimed primarily at the beginning guitar player. Whether you barely know how to hold a guitar or you just have a basic knowledge of some chords, Fender Play and Yousician aim to progress your skills to the “intermediate” stage, where you’ll be a lot more comfortable playing songs, doing some songwriting, and soloing a bit.

Where the two services differ is the way they teach you to play guitar is drastically different: Fender Play is traditional video lessons, and Yousician is more of a game.

We’ll spend the rest of this guide comparing the two, talking about their pros and cons, and declaring a winner!

Fender Play is a guitar, bass, and ukulele online lesson platform backed by Fender (obviously), who are industry giants. They released the Fender Play website and apps (iOS & Android) in 2017 as a way to get players to not abandon the instrument, and hopefully buy some Fender gear while they’re at it (you get 10% off Fender gear if you join Play).

Yousician was founded in 2010 in Helsinki, Finland according to Wikipedia, but it wasn’t until 2014 that they released their guitar learning app (available on iOS, Android, Windows, and macOS). They followed that up with lessons for piano, ukulele, bass, and voice.

Yousician are also the minds behind the very popular tuner app Guitar Tuna, which we’re fans of and covered in our best guitar tuner rundown.

Is Fender Play or Yousician better for beginners? This is the most important question, since both programs are heavily aimed towards beginning guitar players.

Fender Play is a lot like the other big online guitar lesson platforms, and it's pretty simple - you learn by watching video lessons, organized into an easy to follow system. They ask you to:

Once you’ve made your selection, a curriculum is built for you, called My Path.

At this point it’s very straightforward. You move down the timeline, completing one lesson after another. Most video lessons teach you concepts, and occasionally you get to play a song to apply what you’ve learned.

The objective of My Path is to complete 5 Levels of increasing complexity.

What’s great is that each video lesson is very short, usually under 5 minutes (2-3 is typical). Videos are taught by different instructors, and the content itself is shot in HD with great production value.

Next let’s break down Yousician:

It’s more of a video game type approach, made famous by the Guitar Hero series of games, where the objective is to time playing notes correctly as they fly towards you on the screen.

With Guitar Hero the guitar controller you use is fake. Yousician uses this same approach, with the goal of actually teaching you to properly play with a real guitar.

The way it does it is by picking up the notes you are playing through your computer or phone’s microphone.

You’re shown the guitar’s fretboard, which scrolls along as some backing music is playing and tells you to play which notes using which fingers at specific times, guided along by a bouncing ball. The note turns green when you nail it, and red when you don’t.

That’s the basic gist of it, but there’s more you can do. For instance if you keep messing up a piece at full speed, you can enter a “Practice” mode where you can slow it down and rewind as many times as you need until you get it.

As you progress through each lesson you either pass it and are able to move on, or fail and have to repeat. When you pass, you’re given stars for accuracy and points. It all seems kind of arbitrary, but it sure is fun. It reminds us of playing fast paced video games where you fly through the levels and accumulate a score like Sonic the Hedgehog.

But it’s not all games! The content is organized into a plan, and it contains paths which go from Level 0 to Level 10. Level 0 consists of learning about strings and frets, and when you reach Level 1 you get to choose a path: LEAD, KNOWLEDGE, or RHYTHM. LEAD and RHYTHM go to level 10, while KNOWLEDGE stops at level 6.

Every module has exercises, some of which are just videos you watch, but mostly it’s the video game-style play along.

On Yousician, you cannot progress to the next lesson until you finish the one before it! This is different than most other guitar lesson websites, where you can skip around.

If you think the material is too easy for you, every level has a “Try to Unlock Level X” which, if you complete that exercise successfully, unlocks everything to that point.

Aside from the main learning path, Yousician has other sections you can explore but it’s not immediately clear what everything is. We eventually figured it out but you have to “learn by doing.”

One really cool feature is on the HOME screen, if you select Take a GUIDED LESSON it asks how much time you have today: 10 minutes / quick, 20 minutes / casual, or 30 minutes / intense (not sure we would call 30 minutes of guitar practice intense, but hey, this is aimed at beginners).

After that it leads you through some warm ups to get your fingers going, and jumps into a few lessons based on where you left off and how much time you have. Very cool!

All in all, learning how to play guitar Yousician-style is VERY fun. Even though we’re not beginners, we had a grin on our face going through the beginner exercises - it really does feel like you’re playing a video game!

Our laptop and iPhone’s mic did a good job capturing the notes we played, but one word of caution is to have either an acoustic guitar, or an electric guitar you can amplify. We tried with an unamplified electric guitar, and about 30% of the time the mic did not pick up the notes.

The thing Yousician is missing versus Fender Play’s more traditional video lessons is that playing guitar is more than just hitting the right notes - the way you play them is very important! Yousician misses out on this a little bit, so as you advance you will be doing so in quite a “mechanical” way.

The good news is that Yousician is a good way to naturally get your timing down, since in order to score points and progress you have to hit the right notes at the right time.

With the video game approach, Yousician is super fun. If you’ve never picked up a guitar in your life, or video lessons simply don’t keep your attention, we definitely recommend trying it.

Fender Play is a little more thorough, and more like the way it would be if you took lessons in person from a teacher.

For intermediate & advanced guitarists, neither Fender Play nor Yousician is ideal. Both lesson platforms are very much tailored to beginners.

Fender Play has a Skills section where you can find a mix of more advanced lessons. You can filter by instrument and category (like chords, theory, etc) but unfortunately not by skill level.

The lessons themselves are high quality and no doubt there’s a lot to learn, but finding the right courses to take is challenging.

Similarly, Yousician has sections like CHALLENGES and WORKOUTS. You can make a selection like Shredding Solos, and there you’re presented a list of songs. You can use filters to only see songs at a certain difficulty level (the level range here is from 0 to 15).

Say you want to learn scales and filter to level 10, and want to try Major Scale Sequences. At this point, it jumps right into the Guitar Hero-style game, having you try to nail down a scale at a fairly high speed. It would be nice to see video footage of an instructor playing it, in addition to receiving some hints and tips about the most correct and efficient way to pick the strings.

If you’re an intermediate and up player looking to improve, it’s hard to recommend either of these services. You’re much better served trying out Guitar Tricks or Jamplay, which we compare here.

For Bass and Ukulele Players

If you’re wanting to learn how to play bass guitar or ukulele, everything we’ve said thus far about guitar applies here too.

Choosing Fender Play or Yousician for bass or uke really depends on if you like Fender Play’s tutorial video approach, or Yousician’s video game style.

Both Fender Play and Yousician offer bass and ukulele lessons, and both do a nice job at teaching you those instruments. If the video game approach works for you, try Yousician. Otherwise, Fender Play has excellent video content.

We’ve established that both Fender Play and Yousician are great ways to get started playing guitar.

If you’re completely new to playing the guitar - i.e. picking one up makes you uncomfortable - the video game approach of Yousician is a very fun and addicting way to learn how to play. You’ll be playing along to your first song (albeit just a simple note or two) within minutes.

If you’ve picked up a guitar but don’t know much beyond a chord or two, and would like a substitute for in-person guitar lessons, Fender Play is perfect. The My Path makes a lot of sense and the quality of instruction is great.

If you consider yourself to be past the beginner stage, we cannot in all honesty give either of these services our endorsement. They fall short of similarly priced services like Guitar Tricks and Jamplay, so we recommend you give those a look.

Fender Play is one of the best deals when it comes to learning how to play guitar online. A full-access membership is $9.99/mo, and if you pay for a year up front it comes to $89.99 $67.49 (click here for this limited time promotion).

(On top of that, a Play membership includes 10% off Fender guitars, amps, and gear)

Yousician is obscure when it comes to showing you pricing. They let you sign up for a 7 Day Free Trial, which is nice. The membership tiers are PREMIUM and PREMIUM+ (the difference being PREMIUM+ includes all instruments and playing along to actual real songs that have been licensed).

Make no mistake - we love Yousician. Turning learning guitar into a fun game is a genius idea, and Yousician will let you build up confidence on the guitar quite nicely. However, as you progress you might tire of doing the same game over and over.

Fender Play has high quality video lessons taught by pros, and watching them play the techniques and exercises before you give it a try is a huge benefit, in our eyes.

You also can’t beat the value Fender Play provides. They’re some of the least expensive guitar lessons around.