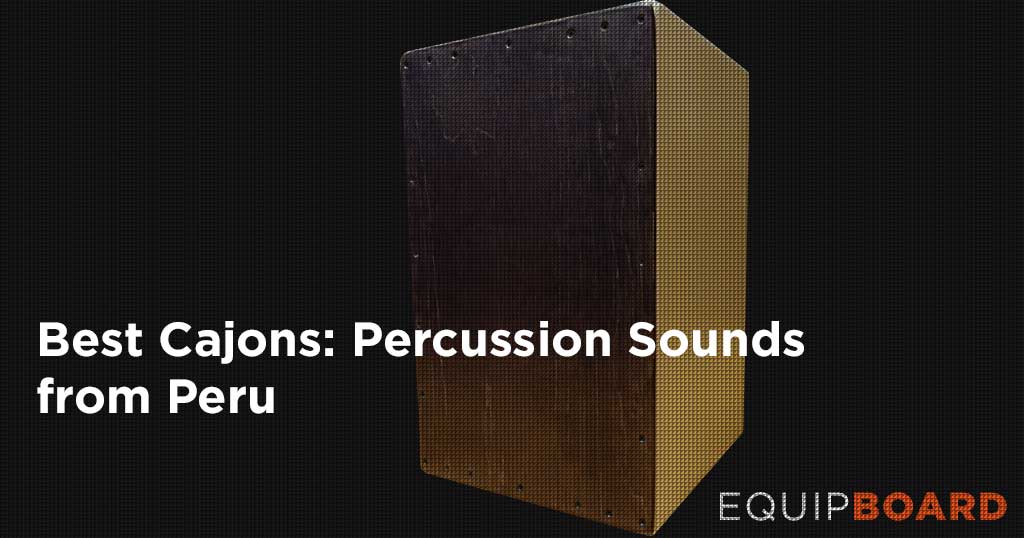 The cajon has quickly become a fixture in both jazz fusion genres and flamenco. It’s popularity has also started to bleed over into other genres to the point where it’s not unheard of as an accompaniment for blues, pop, rock, or even funk.

While the cajon has been played Peruvian music since its inception, its recent fame can be attributed to the Spanish flamenco player Paco de Lucia. Paco de Lucia used the cajon as a way to provide a more reliable rhythm section to flamenco music, and he chose the cajon because it features a timbre more similar to the more common percussive guitar slaps found in the genre.

A skilled cajon player can pull a pretty wide variety of sounds out of their instrument, none of which have the sustain or power to distract from more minimalist pieces of music. The cajon really is a great fit in a wide variety of genres.

What Should I Look For In A Cajon?

Cajons are generally built to emphasize a woody bass tone or a woody snare like tone. With the exception of traditional Peruvian cajons, most recently made instruments come with some sort of mechanism to approximate a snare-type sound. This is generally done with either wire or guitar strings that are ran on the front side of the box.

Some even have been manufacturing a cajon with an easy to use snare adjustment mechanism on the back side of the instrument. This is a great option if you’re a dedicated cajon player because it allows you to dial in a wide variety of tones with a minimal amount of effort.

the Meinl Percussion Headliner Series HCAJ1NT is a great option for any percussionist looking to experiment with the cajon.

Founded by Roland Meinl, Meinl has a great reputation for producing killer percussion instruments. The brand has been in operation since 1951, and while percussion quickly became their primary endeavor they actually produced a variety of wind instruments during their inception. However, following the introduction of their cymbals in 1952 the brand went on to focus almost exclusively on percussion instruments, crafting everything from chimes to cowbells.

This cajon features snare wires on the top corner of the coverplate, and as you move farther away from these plates you move more towards a bass drum sound. The inclusion of snare wire opens up a world of possibility with this cajon, because it allows you to perform a variety of different rhythmic accents. You can also adjust the tension of the snare wires, enhancing or diminishing the response they have based on your needs at the time. The snare wires are adjusted with a hex key on the bottom of the cajon.

It comes with adjustable top corners, which allows you to alter the distance between the playing surface and the body of the cajon, which dictates the amount of percussive slap in your sound when you play corner hits.

This instrument’s tone has a very nice balance between the snare and bass tonalities, something which many cajons struggle with. It also has a reasonable amount of volume. This cajon is made entirely from rubber wood. It also has four solid rubber feet in addition to a matte finish.

The Meinl Percussion Headliner Series HCAJ1NT Cajon is a great value for any musician looking to add an affordable cajon to their collection of instruments.

The Schlagwerk CP 408 is an affordably priced percussion instrument that offers utility both to traditionalist musicians as well as those looking to add in a new sonic flavor to their recording and live performances. Schlagwerk was one of the earliest companies to produce the cajon.

This cajon features a mechanism that can completely remove the snares from the playing surface, essentially making this two instruments in a single package. The benefits of this should not be understated, because it allows you to fundamentally change your instruments sound.

The body of this cajon is made from 8-ply birch, a tonewood which is highly desired in percussion instruments for its quick and focused response. The instrument also features 40 snare wires, ensuring that when the snares are introduced into the tone of the cajon you get a very noticeable snare sizzle.

This cajon does come with a soundport, which does a lot to increase the ease with which it can be miced for either a live performance or a recording session. And while this isn’t going to have much of an impact on the tone, the dark oak veneer front plate is a nice aesthetic touch.

This cajon doesn’t come with a carrying bag/case, though while this is unfortunate it’s a common enough occurrence that we wouldn’t call it a notable flaw with this model because it’s a common occurrence with cajons in this price range.

Overall, the CP 408 is a good value for the price and has the versatility needed to really explore the instrument and make the most out of the cajon.

The Pearl PBC507 JC Jingle Box is essentially four percussion instruments in once package, all of which can be used simultaneously to create a wide variety of different rhythmic patterns.

Founded in 1946, Pearl is a multi-national corporation based out of Japan that was founded by Katsumi Yanagisawa. While Pearl is best known for their drum kits, they have always manufactured a variety of different percussion instruments.

With the featured snares, you have the option of striking the instrument in a way that produces a tone that resembles either a bass drum or a snare drum. In addition to these two common tonalities the pearl cajon also has the ability to add in tambourine jingles as well as Brazilian Platinella-style jingles. Essentially, a platinela is a Brazilian analogue to the tambourine that is used in Samba. The inclusion of these two different sets of jingles give this cajon a flexibility that it wouldn’t otherwise have, opening up an entire world of sound that would be impossible to attain on a cajon that lacked these features.

We also know that there are going to be those of you who don’t want these elements present in your cajon’s sound in certain situations, so thankfully the Pearl PBC507JC does give you the option to mute the jingles via the switches located on the front plate. Also importantly, the inclusion of the jingles and the mechanism that mutes them doesn’t have an adverse effect on the responsiveness or volume of this instrument.

The LP Americana Groove Wire Cajon is a great option for any musician looking for a beginner level cajon.

This cajon is made in the United States with a higher level of quality control. It does not have a way to disengage the snare wires, so if you’re looking for a cajon with this capability you’re going to want to look elsewhere. With that being said, there is another version of this cajon that does have adjustable snare wires, it’s just roughly $100 more expensive. The Americana has a rear sound port and does not come with a carrying case.

While it may not have the versatility of more feature rich cajons it does have a very good sound representation. It has a great balance of snare and bass drum tones.

The LP Americana Groove Wire Cajon offers a great value to any musician looking for a great sounding and affordable cajon.

The Meinl Percussion JC50LBNT cajon is a great option for an entry-level cajon.

A positive feature of this cajon that many instruments in this price range don’t have is that you can adjust the top playing surface. This allows you to control the amount of percussive “slap” that’s present in your tone.

One of the most notable features of this cajon when you consider its price point is the fact that it comes with a two year manufacturer’s warranty when purchased from authorized retailers.

The instrument has a good tone and volume for the price, standing head and shoulders above many of its competitors in this department. It is smaller than many high-end cajons, but regardless of this it’s still regarded to produce a very respectable amount of volume. In summary, the Meinl Percussion JC50LBNT Cajon is a great option for beginners.