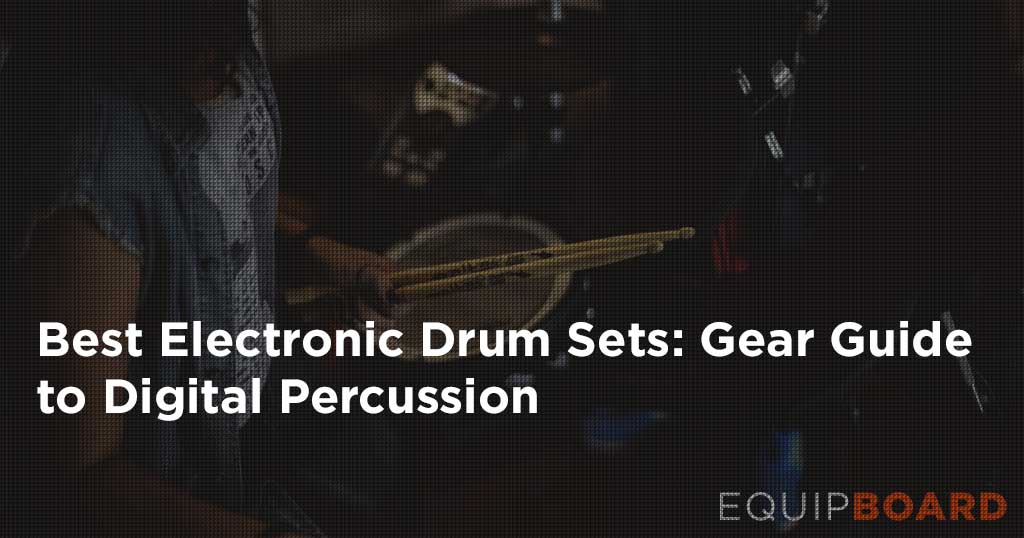 To be a good drummer you have to practice. If you live in a house with other people, or in close quarters and don’t want to disturb anyone (or have anyone call the authorities) you have to figure out how to practice at lower levels to accomodate those around you. Electronic drum sets are a great way to simulate the real deal at low volume. Here are the best electronic drums on the market.

Transducers send an impulse to your kit that functions in a similar way to a guitar pickup, converting the energy that the pad is struck with into a signal that is played through the speaker.

Trigger pads are imitations of different pieces of a traditional acoustic kit, like a bass drum.

There are a few different factors that decide how your electronic kit is going to sound and how it’s going to feel when you play it. The more sophisticated the set the more capable it is of producing varieties of sounds, and the more sensitive it is to your technique and approach to playing.

More expensive kits generally have a wider dynamic range, allowing you to fully explore the capabilities of your kit. Some of the more sophisticated modules will even be able to tell the difference between sticks and brushes.

Aside from the obvious being quieter, most electronic drums are going to have a wide variety of different sounds available, making them sonically versatile.

Also electronic drum sets are usually much more portable than an acoustic kit.

Finally, many digital drums will also have built in instruction to help you learn to play.

Founded in 1980, Alesis has always been a company that puts musicians first and has been providing musicians with solid value for decades. The company was founded by Keith Barr, who also cofounded MXR, in Hollywood, California.

Like dozens of products the company has produced, the Alesis Nitro Electronic Drum Kit also presents an unparalleled value to musicians on the hunt for an electric drum kit that won’t break the bank.

The first thing you will notice about the Alesis Nitro kit is that it is significantly less expensive than kits with comparable features. The Alesis Nitro features rubber drum pads, three toms, a snare, a kick pad with a pedal, a 10” ride and high hat, and a crash with a choke.

The Nitro comes with 40 preset drum samples and allows you to tweak your own samples using 385 custom sounds included in the drum module. The Nitro also comes with 60 play-along tracks, which is a huge plus for beginners. The package is rounded out with with drum sticks and an included power supply.

When considering its price tag it really is a great value and musicians are also able to customize their kit, giving it a greater utility for folks looking to get into live performance.

The onboard samples themselves are good, yet similar and differentiating them can sometimes be difficult. This can be compensated for by creating your own presets.

Our only concern with the Alesis is that the frame isn’t as stable as it could be. The pads, electronics, and pedal are all very stable and well built. However, the frame could definitely be sturdier.

Bottom Line: The Alesis Nitro electronic drum kit is a great buy for beginning drummers. It’d also be a great fit for drummers who are looking to expand beyond acoustic kit, or into silent practice.

The TD1KV V-Drum Compact Electronic Drum Kit doesn’t sacrifice on sound or quality, but still provides an excellent value to musicians who can’t dedicate large amounts of space to either a larger setup or a more traditional acoustic drum set. The standout feature of this kit is how small the footprint is. It is still a formidable kit while maintaining a sleek profile.

The TD1KV has a somewhat unconventional layout. The included units (two cymbals, a high hat, two toms, a snare drum, a kick pedal, and the TD-1 Percussion sound module) all attach directly to the frame. While this cuts down on the space required, it does make it feel a bit different than a traditional acoustic drum set.

The TD-1 Percussion Module include 15 built in kits, which offers drummers plenty of options to shape their sound. This kit isn’t as customizable as others on the market, but bearing that in mind the available options are enough to cover the majority of genres with ease.

The TD1KV also comes with a few features that will be a huge asset to beginning musicians. There are a few different tracks on the kit that drummers can jam along with. But there’s also an included “Coach” function, a metronome, and a recorder. The Coach functionality helps build a repertoire of different techniques and skills, which is great for a drummer who’s just starting out.

Roland’s reputation of producing some of the best digital samples and effects on the market is justified. They all sound lifelike, and they’re all capable of sounding great at a show or a recording session.

The kit definitely does seem to benefit from the smaller frame though, as it feels more solid than similarly larger kits in this price range.

Bottom Line: While the Roland TD1KV may be a bit less flexible than some other kits on the market, it’s compact dimensions and realistic sounds are sure to be an asset for drummers who find themselves short on space.

The Yamaha DTX450K is a great mid-tier electronic drum kit. It has a host of useful features, including an iOS app. The app includes some useful resources that will be invaluable for any beginning musician. The DTX drum lessons are a great way to get started.

The DTX400 app allows you to customize your drum samples. While this can also be done with the drum module, the app definitely streamlines editing and tweaking samples. The app shows a visual representation of all the pieces of your kit, and you select those to change or edit drum samples.

One great thing about the DTX450K is that it’s easily expandable and upgradeable. This allows drummers to upgrade as they become more proficient. The DTX-450K also features an expanded rack, which will doubtless be more comfortable for drummers with a larger build.

The Yamaha DTX450K features 297 high-quality samples spread around every piece of the kit. It also features 10 customizable kits, with the ability to tweak the various settings to your heart’s content.

The Yamaha DTX450K is a high-quality piece of equipment, and it really would be a great addition to any drummer’s rig. The kit is more stable than most of its competitors, so it’s sure to hold up to regular playing and practicing.

Bottom Line: the DTX450K really does sound good. The included samples are very lifelike, and are well suited to handle everything from a jam session to a band demo.

This kit is incredibly light weight, which comes in handy if you consistently find yourself lugging around your kit. The pads feel very natural and nuanced.

The Roland TD-11K-S is powered by the TD-11, which can be thought of as the brain behind the kit. This is what stores all of the preset samples, and it’s also what allows you two fine tune the different presets. Every sample on the kit can be fine tuned to your heart’s content.

As a whole, the samples are very lifelike and lively. This is a higher-end kit, so all of the onboard sounds are going to be high quality and relatively realistic. Roland is also the king of producing great digital effects as the company is active in pretty much every area music technology and modeling.

Bottom Line: The Roland TD-11K-S is a good electronic drum kit. It’s petite weight is a double edged sword. While it does result in a kit that is incredibly portable, it also makes the drum set feel a bit flimsier than it should. However, it does also sound very good. It’s also relatively affordable, which is a plus for any musician on a budget.

Though it’s not an established brand, 2Box (a Swedish based company founded by former employees of ddrums, a drum based devision of the Clavia company) presents a great value to the musician on the hunt for an electronic drum set that can hold up in professional/gigging situations.

The DrumIt Five series is based off the tunable mesh kit designed pioneered by the Roland V-Drum line to reproduce the feel of an acoustic drum.

As previously mentioned, the 2Box DrumIt Five is first and foremost a faux acoustic drum set. It’s meant to feel as much like an acoustic kit as possible, offering the same amount of dynamic range and a relatively similar feel when playing. The trigger pads offer separate rim triggers, and the cymbal pads have three distinct triggers to reproduce the sound of different techniques.

There are one hundred preset kits stored in the module’s memory, along with a ton of WAV files that drummers can jam along to.

In addition to customizing the preset kits, you can also tweak the sound of each unit of the kit individually. You can modify the tuning (not pitch, but rather a representation of the tightness of the drum) as well as volume. You can also change variable such as attack, hold, and decay. The samples themselves also take velocity into account, allowing drummers to properly execute different dynamics. You can layer different samples, which further enhances the variety of sounds that you can get from this kit.

Users should be aware that the DrumIt Five is geared more towards real drum sounds, rather than some of the surreal effects you’d find on some electronic drum sets. Similar to Line 6, a lot of the preset on the DrumIt Five are based off of famous drum sounds. "Give It Away", "The Pretender", and "Kashmir", to name a few.

As far as quality is concerned, the 2Box DrumIt Five is a professional level kit. It’s very stable, and it’s light without feeling flimsy. It has all of the durability of an acoustic drum set without taking up even a fraction of the space.

Bottom Line: The 2Box DrumIt Five is a premium electronic drum set designed for professional recording musicians. No doubt, this is a great drum set. Any drummer who’s on the lookout for an electronic kit would be more than satisfied with it. It sounds great, and it’s definitely capable of holding up to the stress of regular practice or performance.