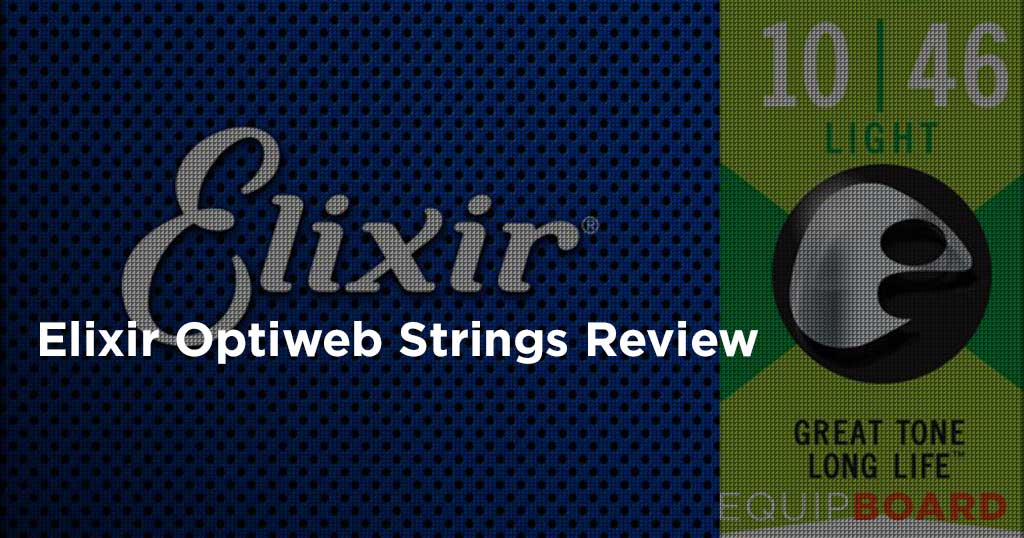 I’ve been using Elixir’s acoustic strings for over a decade so when the Fed-ex guy dropped off a little box for me last week I was excited knowing that the new Elixir Optiweb electric guitar strings were inside. For over 25 years I have used Ernie Ball 10 to 46 Slinkies, and I’ve only flirted with other roundwound 10 gauges a pack or two at a time (and one of those flirtations was with Ernie Rock n Rolls). For this reason I will make reference to Slinkies throughout the article by way of comparison.

When I agreed to review the Optiwebs I had decided to go with two of the average, workingman’s guitars from my horde, an SG standard and a slab rosewood/alder body Tele. I’ve owned these guitars for a long time and really know what they sound like. While they’re a little customed out, they both exemplify the stereotypical Gibson and Fender sound of the classic rock and country era. I also decided I was going to stick with a handful of amp and speaker combinations that I know really well, a Matchless HC30 clone that toured with me, ‘69 Traynor and my trusty Vox AC30HW2X that’s my workhorse and best master volume amp. All these amps have been serviced lately and have fresh tubes. For the HC30 and Traynor I used my low volume cab, a small 2x12 with a couple of 80s G12L35 low efficiency Celestions that allowed me to work the heads hard without moving too much air. I also hooked up a couple TC pedals, a Nova drive (Tube Screamer and Rat style) and a TC flashback X4.

Having carefully strung up both guitars I tuned up and found that they intonate an average 15 cents sharp from Ernie Slinkies across the board. Easy fix, especially since they were all sharp. I spent the rest of my Saturday breaking them in playing hard through the turned up Traynor. The Traynor is a very dark amp that breaks up early for a 50 watt EL34 head and to avoid mush I usually turn the treble up to 9 OR 10, but with the Elixirs I had sparkling treble to spare and more presence. I especially liked the treble response from the Elixirs on my SG where I was hearing harmonics pop that I don’t usually hear through this amp sans drive pedal... even from the neck pickup! The bass on both guitars was MUCH tighter than the Ernies I usually play. There’s a real focus. The first day they were stiff, but no stiffer than any other string is day 1. The surface of even the wound strings felt a little slick. Right away I found myself executing big, precise slides and faster runs than I would usually attempt before warming up -- really nice feel. Where Ernie’s coated version of the Slinky feels about the same as a normal Slinky the Optiwebs are fast and encouraging.

After trying both guitars through all 3 amps at various volumes, distortion levels and with various effects patches (the 2 pedals I plugged in have presets) I found I had drastically adjusted the limited control sets on the amps though I didn’t have to do too much tweaking of pedal presets once I found a good core tone. Not only do these strings have treble to spare, they have a certain upper-mid presence and lower-mid scoop versus classic strings that sounds pre-EQed in a flattering way.

As a final experiment I took the Tele and plugged it into my Radial DI and re-recorded a part I had recorded through the same DI a month ago using a fresh set of Slinkies on the same guitar. Though no two performances are the same, analyzing the frequency response with a spectrograph plugin showed me that the Elixir Optiwebs indeed have less lower midrange in the ‘mud’ range between about 300 and 800 hertz while they have a lot more treble with a hump around 5 kilohertz. These are EQ decisions I am likely to make when recording DI guitar and they are frequencies I try to tame and accentuate respectively with amp settings and microphone placement when recording tube amplifiers. Hats off to Elixir for building this into their string!

To sum up, Elixir’s Optiwebs are excellent electric guitar string for any player who likes brighter-than-nickel sounds without the hash of all steel strings. They provide everything you want from your guitar and pickups and none of the stuff you don’t. The feel is slinky, smooth and fast. Unfortunately I only had about a week to review them so I can’t speak to the effectiveness of the coating at maintaining this tone but from the day I put them on to the day of writing the Optiwebs did not vary in response one bit. I would recommend these strings to any player whether they’re beginners, intermediate or even seasoned professionals. Unless you are into warm and round vintage tones these strings will work for you because you can always take away top or bottom somewhere down the line but the sparkle and focus of these strings is something you can never add back in if your axe isn’t putting it out. I think I’m finally ready to make the switch to coated strings and I know which ones I plan to use from now on.