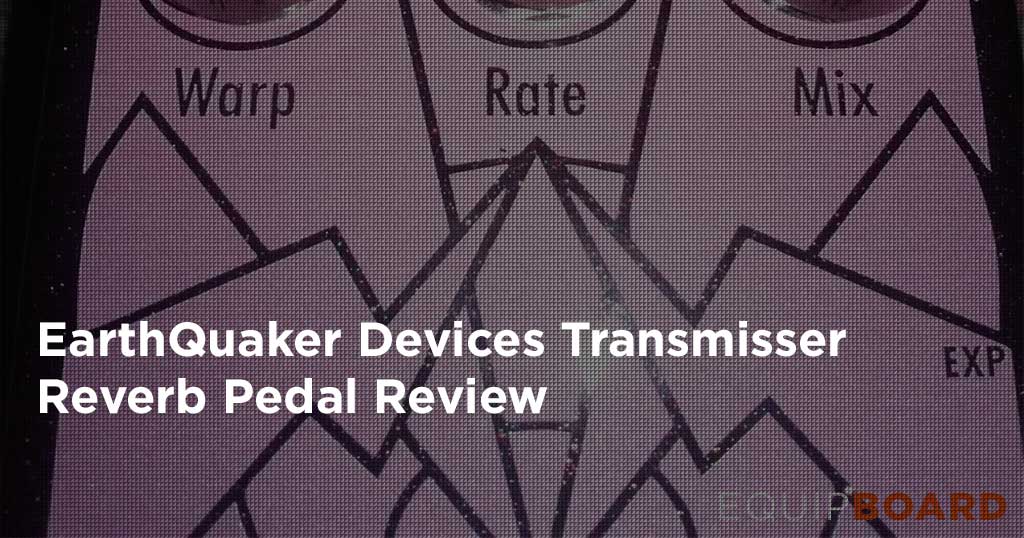 I have a really uncomfortable relationship with reverb as a guitarist. I like vintage amps and they don’t have effects loops. I get most of my overdrive from the amp. I like to play as loud and crunchy as is tolerable for other humans. You can get away with delay into a distorting tube amp’s front end but reverb gets pretty funky and I am generally creating a lot of my own reverb with volume anyway. I am aware that I’m a dinosaur and I’m comfortable with that fact. Out of step with the times is my natural rhythm.

When I was a recording engineer I loved washy room mics, plates, springs and classic digital processors. I also loved screwing up all of the aforementioned reverb sounds to create some really ‘effecty ambiances’ (I totally just invented that term, but you can pass it off as your own at band practice if you want) that would give some projects what I liked to think of as a sense of ‘X-files’ space -- when appropriate, or course.

So when I saw that the mad scientists at EarthQuaker Devices had released a new reverb with a synthesizer-style resonant low-pass filter built in I was feeling excited and asked for a demo unit thinking I was the perfect guy to review this thing being a real guitar purist live but a synth and processor tinkerer in the studio. Little did I suspect that this review would turn into a fun and frustrating trip down the cavernous rabbit hole that is the Transmisser. For the sake of space I suggest you all go read EQD’s instructions before proceeding further. I hope you got as big a kick out of that as I did, now let’s talk Turkey.

I quickly recorded 3 guitar examples for this article that I think will speak a thousand words. I am not a microtonal drone musician. I don’t create 1 chord soundscapes. I played in big bands for much of my youth and I have never been in a keep it simple rock band. Even the most indie-sounding rock bands I was in really didn’t shy away from some complexity, so unlike a lot of the demos you will hear of the Transmisser, mine are really about trying to use it to enhance songs, not creating songs out of the splatty soundscape it makes when you play one note and twiddle the filter.

In Example 1 I set up a modern AC30 in my typical way, breaking up quite a bit on rhythm, pummeled by an LP with a hot bridge pickup. Inline I had an MXR Badass OD set pretty dirty and with about unity gain for leads and then the Transmisser. I wanted to use the reverb from the Transmisser as an effect with some typical settings I might use at a gig and then try to cop Fripp’s tone from Heroes by David Bowie. I made a nice little verb on dirt sandwich here. In the example you can hear me engage the 2 effects in order. I didn’t even spend a ton of time dialing in the Transmisser’s 6 potent controls. I just fiddled a little with both pedals and had at it. I think it sounds pretty cool if a little unruly at times during the busier phrase at the end. But these controls have a limited travel by design, from “wow, that’s cool and intense” up to “that’s set way too high!” Yes, this thing is like the Squirrel Zapper from the Sifl and Olly show. It’s just supposed to stun them but if you don’t watch the settings the bodies might just pile up around your amp.

When I sat down to make example 2 I decided to try and take this effect into a whole other realm and at the same time see how musical and subtle I could make it. I broke out my ES-335, flipped to the neck pickup and played some chord melody of a certain song anyone my age will recognize into the normal channel of my Vox. Warm jazz tones ensued and then I engaged the pedal and dialed it down until I thought I had an ethereal backwash of ambiance that was almost like accompaniment. As a guitarist I kept coming back to these conservative decay, warp and mix settings (basically set for minimum chaos). The other knobs are fun to tweak from here. This is also a good starting point for simple, one-note synth or digital piano parts. But even at these settings we are talking about 1 second decay, so you need to be careful about the harmonic content of the music you use it on to avoid some unpleasant dissonances or out of control frequency build ups in the wet signal. Playing legato here really helped me to manage the effect and get something I really liked from it. Something I’ve never really heard before.

Every time I sat down to record a sound example I struggled with the sound when I engaged the Transmisser. On ostensibly clean sound might experience preamp, power amp or speaker breakup at any time. I would think I had plenty of headroom to record without compression but a weird spike would cause a buildup in the reverb that overloaded the amp AND the mic preamp! I wound up breaking down and using a little gentle peak limiting for safety… but that didn’t help with the Transmisser’s tendency to overload the amp or speakers in strange ways when I least expected it.

When I plugged in my 60s style tele I set up a jangly but balanced 90s rock clean using both pickups and set out to try doing some 1979 parts with a wash of lingering atmosphere behind. As you hear in the example there’s tons of overload. Maybe a little from the recording gear but mostly the celestion blues and amp are getting broken up in weird ways by the reverb swell. It sounded weird to me in the room and the recording exhibits even more of that weirdness. Rather than fiddle the settings over and over to get a more tolerable sound in the room I decided to present this recording as an example of how the Transmisser can make it really hard to play a song. You’re thinking you are about to up the cool factor, but there are a pile of settings, guitar, amp and speaker combinations that can really mess up your day once the Transmisser is engaged. Heaven help the guy who doesn’t know his carefully dialed settings got bumped on the way to the gig.

Overall I found that the out of control settings played best as short freakouts in a dirt-sandwich scenario like example 1. A dirt box or distorting amp after the Transmisser acted like a compressor and also added some nice harmonics to the filter cutoff or sweep if you tweak it with an expressions pedal. Otherwise? It can be like a joke that’s funny at first but gets more and more annoying every time you hear it. At least to me, maybe you are digging example 3. If so then this pedal is definitely for you.

Speaking of the expression pedal jack, it controls the filter sweep. Okay, good idea guys. But I could use a second jack for the mix control so I can ride that while playing, because a high mix can be great in one phrase and total trash a bar later. Or you might even decide to take a rest and want to fade out the sustain rather than cutting it completely by bypassing the pedal - its true bypass, no trails folks.

Overall the Transmisser does something cool and unique. I really like this pedal and this is from a guy who almost never plays guitar with reverb. I also think it’s fun as a keyboard effect and I could also see myself using it in the studio as a mono reverb source on my aux send while mixing (maybe patched into a gate with its own sidechain mix to shut it down rhythmically).

For me though the Tranmisser is a once-in-a-while effect. It happens to be incredibly cool when it works contextually with your music (so cool that I want to keep it) but it’s not a practical addition to a lot of people’s live rigs. I think the pedal could be an enormously useful device if it was turned into a really modern gadget with MIDI control available for all parameters so you can use a MIDI expression on any knob, patch storage and most importantly for me? It needs a short mode where the max decay time is 1 second or so and it gets down to a couple milliseconds. With MIDI control I could swap between similar long and short patches depending on how much space there is in a song. I would take a deluxe edition on stage without blinking, but this version is a studio device for me… and it probably will be for many.

So if you’re into exploring outer fringes of one note songwriting and experimental noise jams, Transmisser is for you. If you run a studio or do a lot of professional quality home recording that’s not entirely in the box? This pedal is worth having around. If you’re a working musician on a budget who stays pretty close to the mainstream though I would suggest that you check out something a little more controlled. Personally? I am planning to keep this box of crazy around because the things I have done with it that I liked easily justify adding it to my stash of studio effects. There’s a value here for the right person.

I also want to make special mention of how cool the people at EarthQuaker are. I think it took guts to create the Transmisser (among their other handful of over-the-top offerings) and apart from being some of the friendliest and most down-to-earth people I’ve ever spoken to in the gear manufacturing business (and it’s not like most companies are full of jerks) this pedal came with the coolest ‘case candy’ ever as well as a really neat carrying pouch. They even have some kind of sword and sorcery comic online inspired by their effects line. I have no doubt that these guys will provide you with first rate customer service (and probably some funny drummer jokes) if ever you need support and I feel compelled to close my article by wishing them well in all their effects endeavors (tame and wild) on behalf of guitar, bass and keys players everywhere. Until next time, feast your eyes on that cool schwag I just mentioned.