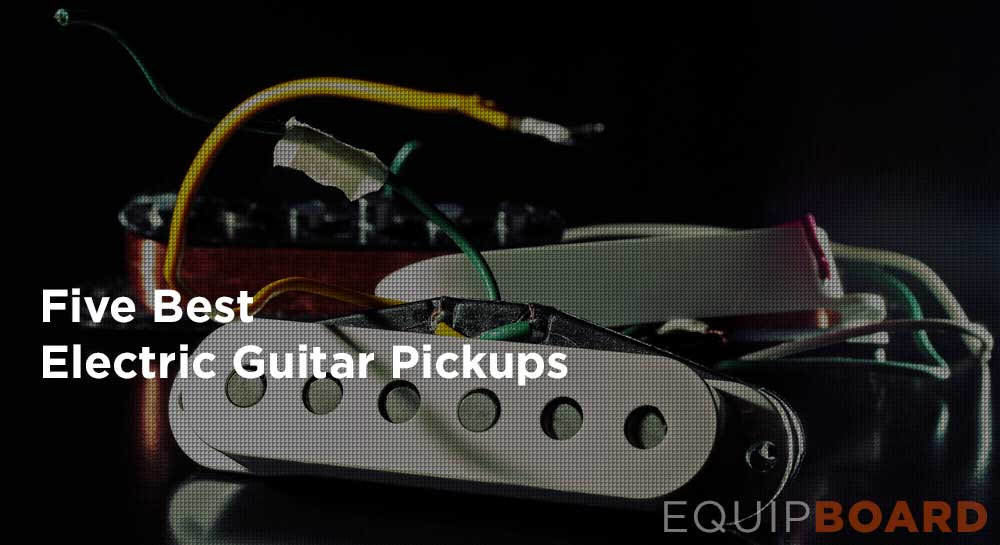 Disconnect your electric guitar and give it a strum. The sound is barely discernible. Plug in, switch on your amp, and everything changes. Without the electrical assistance of a functioning pickup, a guitar makes a lovely prop. When the right pickup is installed and activated, an electric guitar becomes an instrument.

We know that many Equipboard readers are tech types who like to understand how things work. So, before we share our selection of best electric guitar pickups, we offer a bit of useful general information about pickups. Some of this might not be new to you, in which case, feel free to jump right to the information you need:

Components of a Guitar Pickup

At the heart of every electric guitar pickup lies a permanent magnet. Typically, this magnet is made of ferrite iron or an alloy such as Alnico which is iron blended with aluminum, nickel and cobalt. Small flat parts are added to the top and underside of the magnet to form a bobbin, around which several thousand turns of hair-thin copper wire are wrapped. Coiled magnets may then be “potted” by brushing or dipping the coils in beeswax or wrapping the coils with special tape to eliminate microphonic interference. Metallic or ceramic poles extend upward through the pickup to positions beneath each string.

When copper wire is wrapped around a strong magnet, a magnetic field is created. The field exists whether or not the guitar is plugged in and switched on. When a pickup is activated and a string is plucked or strummed, the vibration of the string above the pickup interferes with the magnetic field and induces current inside the pickup. The current is then sent out through a jack into an amplifier.

Pickups can be passive or active. Active pickups require a 9 volt battery or other external power source to work.

For a prime example of single-coil pickups, look at and listen to a Fender Stratocaster. Modern Strats come with three passive single-coil pups that are controlled by a five-way blade-style toggle switch.

Strats made prior to 1977 came with a three-position pickup switch. Leo Fender's preference was for only one of three single-coil pickups to be available at a time. All well and good for Buddy Holly and rockabilly players in the 1950s, but some guitarists had other musical notions. Many found a way to lodge the switch between two positions and achieve entirely new sounds. Guitarists who figured it out early on include Buddy Guy, Otis Rush and Dick Dale.

In the 1960s, some guitarists who used the between-the-pickups position called it “out of phase,” but that isn't really how phasing works. Two pickups used simultaneously this way are generally in electrical phase with one another. At any rate, Leo Fender went with the flow, and debuted Stratocasters with five-way dual-pickup technology in 1977.

The pros of single-coil pickups

If you want that classic, balls-to-the-wall Hendrix sound, nothing but single-coil pups will do. Players praise single-coil pickups for their clarity and clean, articulate voice. Single-soil pups offer a particularly bright midrange. Some say single-coil pups provide more 'sparkle' to amplified guitar sound. Of course, there's still that pesky 60 Hertz hum, which brings us to...

The cons of single-coil pickups

The way single-coil pups are wound makes them natural directional antennas. While this is a good thing, as far as steel guitar strings are concerned, it also makes single-coil pickups susceptible to electromagnetic interference. Commonly known as “hum,” this sort of sonic interference can come from fluorescent lighting, electrical wiring, power transformers, power cables and other electrical sources.

Humbucking pups are made basically the same as single-coil pickups, except they are wound twice, and in two directions. Double winding effectively eliminates the hum, or buzz that can be a problem with single-wound pickups.

Calling the P-90 'legendary' is understating the situation. Created by Gibson sound wizards in 1946, P-90s replaced the bar, or blade pickups that were the standard prior to World War II. Original P-90s were made through 1957, when new PAF, or 'patent applied for' humbucking pickups made their debut.

Hum potential or not, many skilled players prefer the sound of the classic single-coil P-90. For this reason, Gibson re-released the P-90 in 1968 and has offered them ever since. Prior to 1974, Gibson P-90 soapbox pickups were interchangeable, serving in both neck and bridge positions. Today, Gibson P-90s are made specifically as neck or bridge pickups.

Lead guitarists take it all the way with this intensely beefy humbucker. Typically installed as a bridge position pickup, the EMG 81 provides an astonishing amount of high end and sustain that goes on and on and on. When installed at bridge and neck positions, the sound is best described as scorching. EMG recommends pairing an EMG 81 with an EMG 60 for maximum versatility.

During the seminal days of the revered Les Paul Standard, pickup winding was an imprecise science. Machine winds were timed, not counted. The results of these imbalanced coils were as varied as the number of winds found on any typical Gibson pickup of the time. Most worked alright; some were absolutely amazing. That was the magic of Gibson pickups, circa 1959.

Gibson brought the magic back when they debuted their deliberately, albeit perfectly, unmatched '59 Tribute Humbucker pickup. More winds on the screw coil and fewer on the pole coil recreate the classic PAF sound with a smooth voice. Not for metalheads.

Did your favorite pickup make the list? Let us know in the comments below.