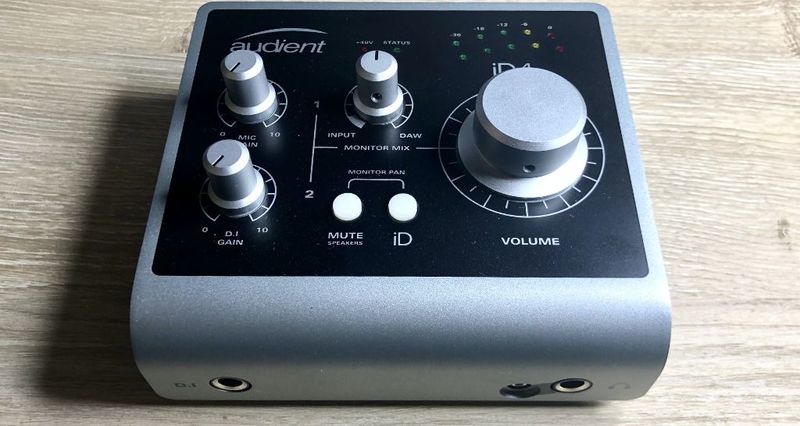 Whether you're a musician, singer songwriter, music producer, or podcaster, a USB audio interface lets you hook up mics and musical instruments so you can record crystal clear audio into your computer, iPad, or smartphone.

An audio interface can be a tough thing to shop for, since there are hundreds out there to choose from, many of them with similar features.

In our guide to choosing the best audio interface, we reviewed units that cost up to $3000 and even more. Obviously, a budding musician or someone with simpler needs doesn't need to spend that much.

Why a USB Audio Interface?

In general, an audio interface helps capture a high quality audio signal from your instrument or your voice, so you can record it on your computer.

Note: We'll keep saying computer, but really we mean whatever device you've got your recording software on - a desktop, laptop, iPad, iPhone, etc.

It goes without saying, but USB audio interfaces connect to your computer via a standard USB cable. More often than not they are bus-powered, meaning the USB connection provides the power the interface needs to run so you don't need a separate power adapter.

USB audio interfaces are great because they're plug-and-play. If you're on an Apple device it should just work, and on Windows you'll need a driver, which the audio interface manufacturer makes readily available. More complex (and more expensive) interfaces connect to your computer via FireWire, Thunderbolt, or other technologies.

USB audio interfaces are the simplest breed of audio interfaces. They typically have the capability of plugging in and recording at most a couple audio sources at the same time - two microphones, or a microphone and a guitar, a guitar and a bass... you get the idea.

Because USB audio interfaces are simple, they're also fairly small and can easily fit on a crowded desktop, or into your backpack if you want to do some recording on-the-go.

The instantly recognizable bright red Focusrite Scarlett line of audio interfaces is extremely popular with anyone wanting to record vocals or instruments.

The one we recommend most is the Scarlett 2i2.

The 2i2 has two mic preamps, so you can have two microphones going at once (e.g. two people speaking or singing at once). Each mic input is actually a combo input which accepts a 1/4" jack, so both the inputs are game for an electric guitar or bass.

Bottom Line: With 24-bit/192 kHz resolution, rock solid drivers, a very proven track record, and an extremely competitive price, it's no wonder the Focusrite Scarlett got to the top of the heap of USB audio interfaces.

To get the down side out of the way first, it only has one mic preamp. However, you can record a line level instrument at the same time as the mic since it has a 1/4" D.I on the front.

You'll notice that for an interface with only one mic preamp, the iD4 is a tad pricey. That's because Audient is known for making fantastic sounding Class-A mic preamps in their high-end consoles, and they brought that quality to this portable unit.

It's hard to articulate in words, but there's simply something better about recordings done using the iD4. Everything sounds a little more "open" and natural.

The design of the iD4 is great, too. The controls are on the top, including a large scroll wheel which is a very smart design. The unit is all metal and built like a rock.

Bottom Line: If one mic preamp is enough for you and you want some of the best sound quality in a compact USB audio interface, provided you don't mind the price tag you won't do much better than the Audient iD4.

The PreSonus AudioBox USB 96 is a tremendous bargain. It really has everything a musician could need for a crazy low price.

It features two mic preamps, and even MIDI I/O.

One small gripe is that we wish the headphone jack was on the front of the unit, as opposed to the back.

PreSonus also makes a fantastic DAW called Studio One, which they give you a license for, so you'll have everything you need to start recording and making music.

Bottom Line: Considering its low price, its difficult to find any complaints with the PreSonus AudioBox USB 96. You can record up to 24-bit, 96 kHz audio, so it falls a little short of interfaces that go up to 192 kHz. The mic preamps also fall short of the quality of the Audient iD4. Aside these minor gripes, with two mic pres, MIDI, and the inclusion of Studio One, the PreSonus AudioBox USB 96 is an outrageous value.

TASCAM has long been making professional audio gear, from mixers to field recorders and more. Their 2-in/2-out USB audio interface, the TASCAM US-2X2, upholds their quality standards quite nicely.

In terms of features, the TASCAM US-2X2 is nearly identical to the PreSonus AudioBox USB 96. It has two preamps, MIDI in and out for your synth/drum machine/controller, a headphone jack on the front with dedicated volume knob, and stereo outputs on the back.

The two mic inputs are combination mic/line jacks, and TASCAM's Ultra-HDDA preamps are very good quality, providing up to 57dB of gain of clear, distortion-free sound.

It has a rugged build quality and its small footprint makes it very portable. When testing it on a Windows machine, the drivers seemed stable and gave us no issues.

Bottom Line: The TASCAM US-2X2 is yet another USB audio interface that proves you can get all the features you need for recording demos or small audio projects without spending a ton of money.

The M-Audio AIR 192|6 is another full-featured USB audio interface with an attractive price tag.

First of all, it sports a very polished look and is well-designed. Like the Audient iD4 it's a tabletop format with the controls on top, which we tend to prefer. The large central volume knob comes in handy.

On the rear panel you'll find two XLR/TRS mic inputs, and on the front are two high impedance instrument inputs (you can use two at once, i.e. two instruments, two mics, or one of each).

Bottom Line: We've always known M-Audio to make fantastic MIDI keyboards and studio monitors, so we were pleasantly surprised to find out they also make pretty great USB audio interfaces. The well-thought-out design and level of polish is the best thing about this interface.

The PreSonus Studio 24c is a lot like the PreSonus AudioBox USB 96, which we also recommend in this guide.

It's a little bit pricier, since the preamps have been upgraded to XMAX-L Preamps for better recording quality, and resolution goes up to 24-bit/192 kHz.

Another difference is that the front of the interface has meters, so you can keep an eye on your levels (the AudioBox USB 96 only has a single indicator that lights up when the signal is clipping).

Bottom Line: If you like the PreSonus AudioBox USB 96 but don't mind paying a bit more for improved preamps, the Studio 24c is for you. Everything else is identical: 2-in/2-out, MIDI, headphone jack, and bus-powered.

The Mackie Onyx Producer 2-2 is a worthy contender for your money if you're looking for a 2-in/2-out USB audio interface with plenty of features and stellar sound quality.

This is a rugged yet refined little box, with a very elegant brushed aluminum black finish. All of the controls are on the front panel, including a large volume knob.

As is typical of 2x2 interfaces, the mic preamps have combo jacks to accommodate either a mic or 1/4" instrument. The HI-Z switch on both channels is perfect for your electric guitar or bass.

Pressing the DIRECT MONITOR switch lets you listen to the direct audio source you're recording with no latency. 24-bit/192kHz resolution and MIDI I/O round out the features.

Bottom Line No stranger to excellent audio gear, Mackie has cemented its place in the world of audio interfaces with the Mackie Onyx Producer 2-2. The low price tag makes this one pretty compelling.

Yet another great entry from PreSonus, the PreSonus AudioBox iTwo is our recommendation if you're primarily using an iPad for your audio work.

The specs are identical to the PreSonus AudioBox USB 96. However, the iTwo comes with the Capture Duo recording app made specifically for iPad.

Bottom Line: If you need an interface specifically for iPad recording, look no further than the iTwo. Even though USB audio interfaces are bus-powered, people have had issues with their iPads not providing enough power to run the interface properly. The PreSonus AudioBox iTwo will save you from all those headaches.