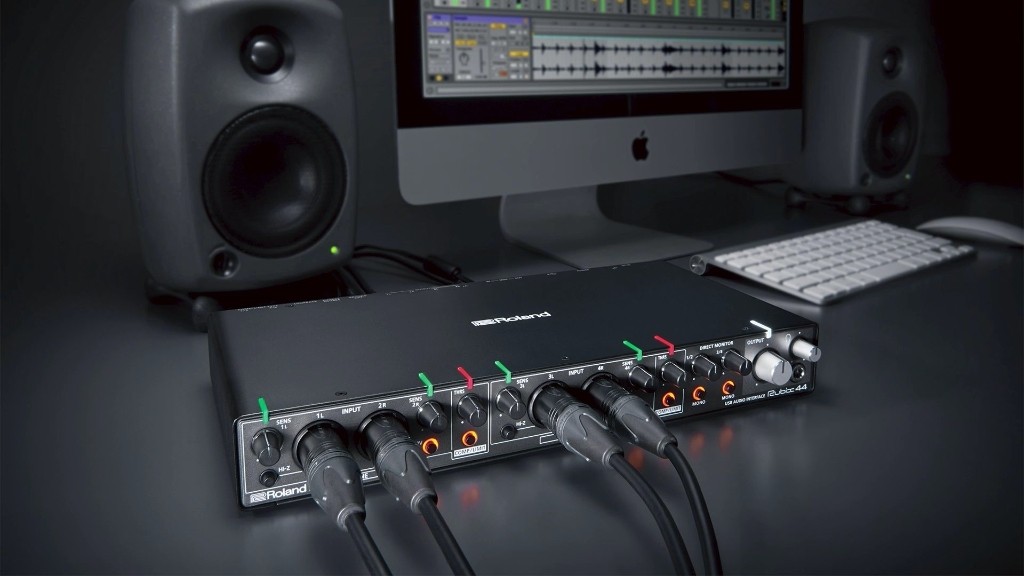 Audio interfaces can be a confusing topic for both budding and experienced music producers alike. There are hundreds of models to choose from, and the terminology seems foreign if you don't know what you're doing (preamps, latecy, ADAT, etc).

We wrote a comprehensive guide to buying an audio interface for any budget range, but realized some questions come up again and again. In this guide, we aim to answer some of the most frequently asked questions about audio interfaces. If you have a question we didn't yet answer, feel free to chime in the comments and we'll cover it!

Does an audio interface improve sound quality for recording?

In fact, facilitating and improving recording instruments is one of the primary uses of an audio interface. Since they're pretty much designed to do this specific job, even inexpensive (sub-$200) interfaces usually do it very well.

The alternative to using an audio interface is to use the on-board sound card in your computer, laptop, tablet, or smart phone - and that comes with a lot of caveats.

Recording equipment and electromagnetic interference (EMI) do not go well together, and an on-board sound card is constantly bombarded by EMI from the rest of the components surrounding it such as the hard drive and the circuitry on the motherboard itself. This can result in a lot of white noise or hiss in the recording.

Aside from isolating the components, audio interfaces have high quality preamps built into them. A preamp takes the low level signal - whether from your mic, bass, guitar, or even a synth - and amplifies it to line level. It's worth mentioning that more high-end audio interfaces typically come with much better preamps than beginner level audio interfaces.

Compared to just sticking your instruments into your built-in sound card, the preamp on board your audio interface makes sure the signal is amplified cleanly, with plenty of headroom, and in some cases with "vintage" coloration.

Even an entry-level audio interface will do the job much better than the alternative, and you will get crystal clear sound right out of the box.

Does an audio interface improve playback?

To understand this, we need to look at how sound inside of a computer works.

Any sound that the computer generates is in the form of a digital signal which then has to be converted into an analog signal by the on-board sound card. This results in a drop in quality due to electromagnetic interference and becomes especially prominent when the volume is cranked up.

An audio interface is able to reproduce a signal much more accurately. You'll likely notice an improvement in clarity versus your onboard sound card, and at high volumes you'll have a better playback experience without any unwanted noise.

Does an audio interface replace a sound card?

This depends on what you use your sound card for.

If you use your computer primarily as an entertainment system and need 5.1, 7.1, or similar sound output options, a sound card makes sense.

However, if you have recording needs, then an audio interface will do a better job than any sound card.

The great thing though is that you can have both of them in a computer and switching between the two is really easy as all it involves is a couple of mouse clicks. A traditional sound card lives inside your computer, whereas an audio interface is an external device which you connect via USB, Thunderbolt, or FireWire.

It can, but not necessarily.

There is actually a pretty big misconception in the music production world that any audio interface will take all the load from your computer and "handle" everything, leaving the CPU to breathe. This is not entirely accurate, since an interface is mostly just a way to handle and route inputs and outputs; convert digital signals to analog and vice versa.

Most interfaces will offload CPU usage slightly, but it might not be noticeable and if you're dealing with a computer that can barely handle your DAW projects, it will not solve your problems.

In order of importance, here are the biggest factors to your computer being able to handle large and complex audio projects:

Audio interfaces that do offload stress from your CPU have onboard processors that handle complex effects, often referred to as DSP (digital signal processing). Universal Audio interfaces are a great example of this. They have dedicated processors which can run UAD powered plugins completely from within the interface, letting your CPU and ram breathe.

Of course, any interface with onboard DSP will cost more.

If you're concerned with lowering CPU usage, and are not willing to invest in either an upgraded computer or a DSP-based audio interface, our recommendations are to:

Does an audio interface reduce latency?

Latency is the time delay between the real-time sound and the corresponding audio signal that is captured. This will manifest itself in an out of sync recording. One of the most common examples of latency is playing a certain note on a keyboard and not hearing that note immediately. This can mess up the entire recording. It can be very annoying and even impossible to both record and edit the mix and it is similar to watching a video where the audio is slightly out of sync with what is happening on screen.

This latency in audio recording is a result of all the audio processing that takes place to convert the incoming signal from different devices into something that the computer can understand and doing the same to the processed signal that goes out. If it all falls on the CPU, then it can get very noticeable to the point where you won't be able to record more than one track and you will not be able to do any useful monitoring.

An audio interface does most of the work and can reduce latency significantly. If you are using a Windows based system then there can still be some latency due to the way Windows processes audio by default, but that can be fixed by installing a freeware called ASIO4ALL.

Does an audio interface work as a headphone amp?

In general the answer is yes, if your audio interface has a dedicated headphones output (most do these days).

If you don't need to record and all you need is to properly drive some high-end headphones, we would recommend you look into a dedicated headphone amp.

If instead you need an audio interface and are wondering if it doubles as a headphone amp, then the answer is probably yes.

Interfaces with headphone outputs are designed with professional headphones in mind, so you can give it a go and chances are you'll be pleased with the results. It comes down to impedance matching, so if you have a high-end set of 250ohm headphones, a budget audio interface should be able to drive them decently well, though maybe not as loud as a dedicated headphone amp.

We recommend not making amping your headphones top priority when shopping for an audio interface. If you find listening to your headphones really lackluster through your interface, you can always shop for a separate headphone amp later.

How To Make Electronic Music