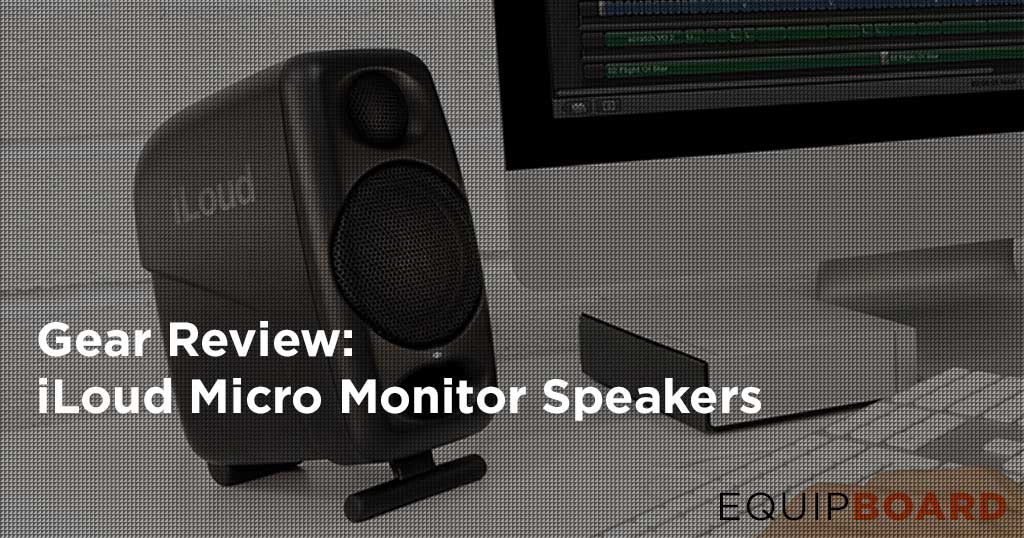 The trend in technology is for everything to generally get smaller and better. Well... almost everything. Studio monitor speakers have been the exception to the “smaller and better” rule, since musicians and producers have become accustomed to their bulky size and weight. Besides, if you’re on the go or have very limited space, isn’t the best option just a good pair of studio headphones? Well, yeah, headphones are good to carry with you at all times, but after testing the IK Multimedia iLoud Micro Monitor, we can tell you an excellent new option has emerged.

Typically, with powered studio monitors you’ve got your super-budget variety with an inevitable compromise made in sound quality, or high-end variety which cost an arm and a leg. Either way, portability is usually not in the cards due to the large footprint and weight of the speakers. IK Multimedia has positioned the iLoud Micro Monitor to bridge this gap, delivering high quality truthful and flat studio monitors that are also extremely portable, yet are priced more on the budget end of the spectrum. In this review we’ll see how well they measure up to those lofty expectations.

Who Are These Monitors For?

To quote IK Multimedia themselves, the iLoud Micro Monitor is “specifically designed for small makeshift working spaces - bedroom studios, small project studios, on the tour bus or in a hotel room.” Whether you’re a beginner or veteran recording artist or producer, these days you can do practically everything with little more than a laptop (or tablet) and some software. This has given rise to the “bedroom producer,” which basically just means that you don’t need a professional studio space to create music; Anywhere you can take your laptop or iPad will suffice.

Of course, you need a way to get music into your computer, and out of it. Getting music into your computer is outside the scope of this review; we’re here to focus on the latter. Typically, musicians on the go favor headphones for portability, and not letting people around you be privy to you trying to figure out the hook of your track for 2 hours. However, versus actual studio monitor speakers, headphones are lacking in a few key ways:

Headphone vs. monitor producing is a hotly debated topic, but everyone can generally agree that it’s a good idea to use both, to make sure your mix translates well across all sorts of sound systems.

But if you’ve got a small desk to work with, or are in a tour bus or hotel room, how do you lug around and make room for big speakers? Well, you don’t have to. Enter the iLoud Micro Monitors. They are light (both speakers together weigh 1.7kg / 60.7oz), small (7” tall and 3.5” wide), and to reduce cable clutter you can connect to them using Bluetooth. Moreover the bass response, clarity, and definition is impressive given their small size. We’ll get more into how they perform shortly, but first let’s discuss some of their other aspects and specs.

When IK Multimedia graciously sent us a pair to review and we first saw the box they come in, we realized they weren’t joking in calling them “micro” monitors. When we think studio monitor speakers, we can’t help but think of the KRK Rokit 8 monitors we had to lug from the music store to our own studio (a two man job); so the promise of good, powerful sound coming out of something so diminutive definitely got us excited.

Inside the box you’ll find the left and right speakers very securely packed and held into place, a small manual, and four distinct cables. Two of the cables are for power (power supply unit and power supply cable), and while the power supply is external we’re happy there’s no “wall wart” to deal with. All of the controls and connections are located on the rear of the left speaker, and a 4-pin speaker connection cable (1.5m/59.1” long) is included to connect the left one to the right one. We wish this cable was a little thinner and more discreet, but you’ll probably be running it behind your laptop so it’s not a big deal. The final cable is a TRS 1/8” stereo to 2 x RCA cable (also 1.5m/59.1” long), which you use to hook up the left speaker to the headphones port of your laptop, iPad, or iPhone. Speaking of, hooking up to these speakers is pretty dead simple. The left speaker has two input options you can choose from - a left & right RCA input, or a TRS 1/8” stereo input. The only small downside is if you use an audio interface whose only outputs are 1/4”, you’ll need a cable that goes from 1/4” to RCA (like this), or to 1/8” (like this).

Getting these speakers set up and playing music took us about 2 minutes. For our tests we didn’t use an audio interface, so the included 1/8” to RCA cable made it very easy to hook them up to our MacBook Pro’s headphones jack. For even less cable spaghetti, the iLoud Micro Monitor speakers come with Bluetooth connectivity! This is very cool because aside from powering them, all you need to do is “discover” the speakers from your laptop or iPad, and voilà, you’ll be getting sound out of them. Bluetooth is extremely convenient and the fewer cables we have to mess with the better, but as with any wireless technology it’s not always 100% dependable, so we recommend travelling with a cable just in case (also keep in mind Bluetooth introduces 155 ms or so of latency).

Monitor speaker placement is a science unto itself, and on their website IK Multimedia does a good job touting the advantages of small monitors when it comes to their ideal placement. The room we tested them in is far from acoustically perfect, so we can appreciate these advantages and can attest to the fact that the iLoud Micro Monitors do indeed have a very small footprint. They also have an adjustable swivel-style isolation bass to tilt them up or down as needed.

After plugging them in and placing them on either side of our laptop, a switch on the rear of the left speaker powers them on, causing a soft blue LED light to come on as an indicator. Volume level is easily adjusted using a volume knob (again located on the rear of the left speaker), which goes from -INF to +6dB, and clicks into place at the 12 o’clock unity gain position.

So first, let’s look at these monitor speakers on paper. Here are the highlights:

All in all, pretty basic stuff for compact monitor speakers. Of course, even the loftiest specs don’t mean anything if the gear doesn’t perform well. We’re delighted to say that after putting them through their paces, the IK Multimedia iLoud Micro Monitor speakers exceeded our expectations.

As a disclaimer, we should mention that the monitors our ears are most used to are the KRK Rokit 8. In our best studio monitor shootout, we also extensively tested the Yamaha HS series, Equator monitors, JBL monitors, and several others. We mention this because it’s not completely fair to compare the bass response of the iLoud Micro Monitor’s 3” woofer against that of a 6” or 8” woofer. Keep in mind as you’re reading this review that it’s more fair to compare these to similarly sized studio monitor speakers.

That said, these little guys are definitely capable of delivering big sound. The highs and mids are present and detailed, but not at all harsh. The bass response is impressive; For a relatively small 3” woofer to reach all the way down to 55Hz is a fantastic feat (most budget monitors with a 3” woofer are only able to go down to about 80Hz). 50W RMS output power is also no joke, and these can get very loud - much louder than you would probably need for nearfield monitoring (then again, the fact that they have Bluetooth and sound so good means you could provide music for a small to medium house party with them, in which case the volume on tap would come in handy).

We tested these speakers for casual listening with all sorts of genres - rap, classical, drum & bass, deep house - and they performed admirably. At multiple volume levels they remained very detailed, which is important. Again, bass response is not quite felt like on monitors with a 6-8” woofer, but what you lose there you gain bigtime in portability. We then put our producer hat on, and pulled up a few mixing sessions in Logic Pro X. Everything we had mixed on KRK Rokit 8 monitors and Beyerdynamic DT770 headphones translated beautifully to the iLoud Micro Monitors. They are indeed flat and truthful, which is exactly what you want out of nearfield monitors; If you get your mix right on these, it will sound good everywhere. Finally we pulled out our electric guitar, plugged it into our iRig HD 2, and fired up AmpliTube. Hearing a distorted electric guitar through the iLoud Micro Monitors highlighted their wonderful midrange detail.

You can definitely tell IK Multimedia put more thought into the sound quality than most small/budget monitors available today. Things like the distance between woofer and tweeter, build quality of the woofer, and crossover alignment have all been meticulously planned and designed. An internal 56-bit digital signal processor (DSP) is the brains of the operation. In IK Multimedia’s words:

This DSP is responsible for things like taking care of the frequency and phase response of the monitors as well as also controlling the dynamic range so that the drivers are always under control and operating efficiently. It also acts as a digital crossover that allows for invisibly smooth transitions between the drivers themselves.

On the control panel on the rear of the left speaker, you’ll find 3 EQ adjustment switches, which lets you manipulate the EQ depending on where your monitors are placed on your desk. We’ll leave it to the manual to explain this in more depth, but just know that with features like this, this is not your average set of cheap consumer “monitors.” Far from it, actually; These are pro level all the way.

The iLoud Micro Monitor speakers come in a slightly higher price than similarly-sized budget monitors from the likes of Mackie, Behringer, and M-Audio. Then again, they are less expensive than entry-level Yamaha HS5 and KRK Rokit 5 monitors. IK Multimedia fills a very interesting gap in the market - these are both ultra-portable, and have a very flat and unbiased sound, aimed at more pro usage for recording, mixing, and mastering. The iLoud Micro Monitor is a great tool for your arsenal if you frequently produce music on the go and have always wished you could take actual monitor speakers with you. These would also make a great set of secondary monitors in your studio, to AB test your mixes on versus your normal, larger monitors. Furthermore, these are simply good, well-built speakers with great definition and capability to get pretty loud, so they can definitely double as speakers for more casual tasks like listening to music, video games, and movies (especially because of the Bluetooth option). Keep in mind that since these are more pro-level, they are meant to expose the flaws of low quality audio.

Because of their wide range of applications, sound quality, portability, and the care IK Multimedia has put into both their aesthetic and sound quality, we can definitely justify their price tag. We wouldn’t be surprised if other manufacturers realize the brilliance behind these and release competing portable studio monitors, but they’ve got their work cut out for them competing against the iLoud Micro Monitor.