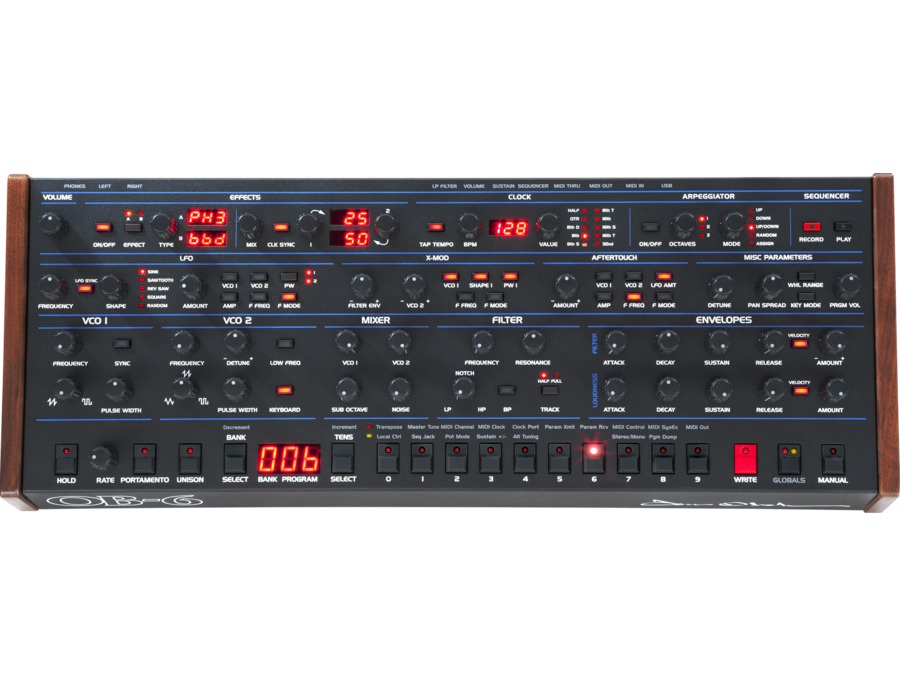 Dave Smith Instruments OB-6 Module is a 6-voice, all-analog, desktop synth inspired by Tom Oberheim's classic SEM circuits from the 1970s. Tom and Dave packed the OB-6 Module with everything on your wish list. With two voltage-controlled oscillato...

The OB-6 Module rocks six discrete analog voices with two oscillators and a sub oscillator per voice. Naturally, OB-6 Module is equipped with Dave's infamous X-Mod (two sources, five destinations). On top of all that, there's a 64-step polyphonic step sequencer, two digital effects engines (with studio-grade reverbs, delays, chorus, flangers, and accurate re-creations of Mr. Oberheim's renowned ring mod and phase shifter), and an advanced arpeggiator. To control all this firepower, you have a knob-per-function top panel that makes for quick, intuitive on-the-fly tweaks. From funk-laden basses and snarling, in-your-face leads to gloriously celestial pads, the OB-6 Module will make your synth dreams come true.

Heart of the beast: Oberheim's classic SEM Oberheim's original SEM (Synthesizer Expansion Module) formed the core of Tom's renowned 4-voice and 8-voice synths of the 1970s. The SEM, in updated form, is also the core of the OB-6 Module analog sound engine. With two discrete voltage-controlled oscillators and a sub oscillator per voice, the OB-6 Module gives you the flexibility of waveshapes that are continuously variable between sawtooth and variable-width pulse. Oscillator 2 also sports a triangle wave. The classic Oberheim-style state-variable, 2-pole resonant filter features lowpass, highpass, bandpass, and notch functionality. The all-analog signal path is completed by the OB-6 Module's voltage-controlled amplifiers.

X-Mod, Poly Step Sequencer, and Arpeggiator The OB-6 Module is spec'd out with Dave Smith's brilliant X-Mod, which makes it easy to achieve killer sounds via modulation. The filter envelope and oscillator 2 are the sources, and they both give you bi-polar control. The five destinations are oscillator 1 frequency, oscillator 1 waveshape, oscillator 1 pulse-width, filter mode, and filter cutoff. The polyphonic step sequencer lets you program polyphonic sequences (up to 64 steps, up to six notes per step), complete with rests, and sync them to external MIDI clock. The full-function arpeggiator can also be synced to external MIDI clock. You can configure the OB-6 Module's Unison Mode voice count for up to six voices. And to maximize your sonic firepower, the OB-6 Module is spec'd with a poly chain feature the lets you pair any two OB-6s for 12-voice operation.

No reviews or videos yet for Dave Smith Instruments OB-6 Desktop Synthesizer.

With an Equipboard account you can rate this item, add it to your collection, submit a review to discuss what you like and dislike about it, and associate Dave Smith Instruments OB-6 Desktop Synthesizer to artists that use it. Create an account! 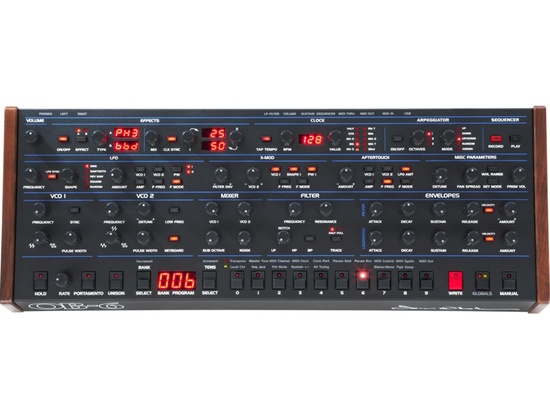