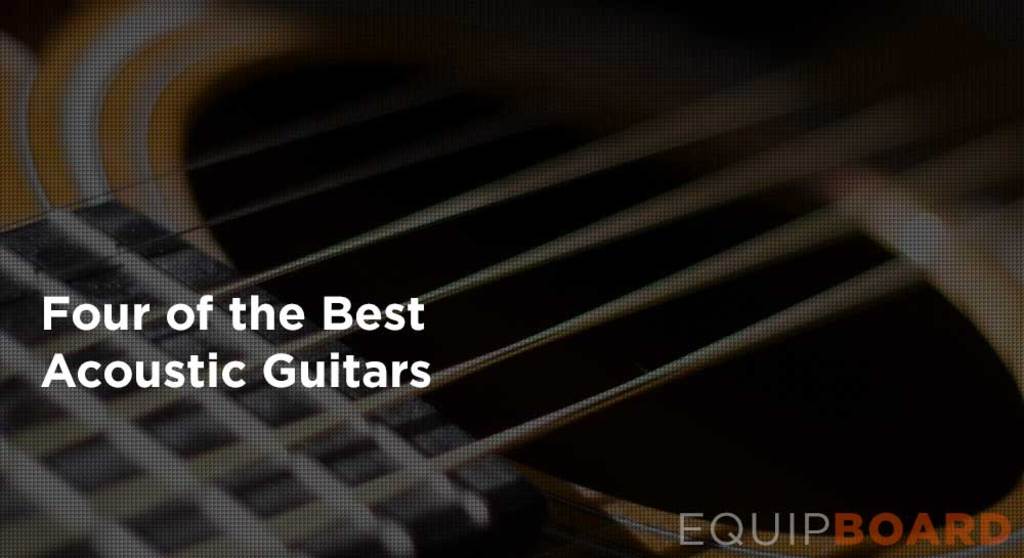 A travel guitar with full-size tone.

The Martin LX1E has mahogany back and sides, but the solid Sitka spruce top is what really gives this guitar its tone and makes it sound as great as it does. The solid top also receives the same hand rubbed treatment as Martin’s higher end guitars do. Martin’s “Modified” bracing pattern also adds to the tone and durability of the guitar.

Electronically, the Fisherman Isys T electronics gives the player a lot of extra features like a low battery indicator, built-in tuner, in addition to standard controls like volume, phase-reversal switch, and a contour to help with EQ. This all translates into the guitar sounding great unplugged or amped up, and the built-in tuner eliminates your need to buy a tuner or bring another piece of equipment on the road. This model also includes a gig bag, which is convenient for carrying it around, and this guitar becomes a great starter pack featuring all you need to venture into a great acoustic for the beginner.

This guitar has a 23” scale as opposed to Martin’s standard 25.4” scale, making it one of the smallest Martin guitars available. However, the smaller size makes this full-sounding guitar great for younger players, helps beginners learn chords more easily, and helps advanced players create chords their full-sized fretboards might not allow.

After all, if this guitar is good enough for Ed Sheeran and under $500, we are impressed.

Reissue of a legendary instrument.

The Epiphone Inspired by 1964 Texan is an inexpensive version of a legendary guitar. This reissue is a replica of the guitar that Paul McCartney made famous.

The main difference between the Epiphone Inspired by 1964 Texan and the original Texan guitar is that the reissue features a standard 1 11/16” nut width. The original guitar had a super thin neck for the time (1 5/8”) which while giving the guitar a unique feel would be a bit uncomfortable for musicians used to instruments with wider nuts.

The Epiphone Inspired by 1964 Texan features all solid tonewood construction. The top is a solid spruce, while the back and sides are solid mahogany. A solid wood guitar at this price point is relatively rare.

The Epiphone Inspired by 1964 Texan features a Shadow NanoFlex pickup system. This pickup system is active and features volume and tone controls.

This guitar features a crisp and clear mid-range in addition to bell-like and chiming highs. It has plenty of volume, and is a very articulate and responsive instrument.

This guitar puts a piece of history in every musicians hands, and because it’s relatively affordable it gives aspiring musicians a chance to play a guitar that’s an approximation of an instrument that’s inspired millions.

The Yamaha LL6M is a balanced choice and one of the best mid-level guitars made today.

The body style of the Yamaha LL6M also lends it some interesting characteristics. It’s bigger than a standard dreadnought, but it’s not quite as big as other guitars bearing the jumbo moniker.

The standout feature of the LL6M is the innovative Acoustic Resonance Enhancement (A.R.E.) wood top. Essentially, the A.R.E. process is used to replicate the molecular characteristics of an instrument that has been played for years. This results in an instrument that’s both more complex tonally and louder than a similarly sized guitar that has not had the A.R.E. treatment.

The materials used in the LL6M are impressive for a guitar in this price range. It features a solid Engelmann spruce top, which is a bit like the cedar of the spruce family. Engelmann is valued for it’s warmth and complexity. The back and sides of the LL6M are made from made from mahogany, further enhancing the warmth and depth of this guitar. This guitar comes with an SRT Zero Impact pickup, a passive pickup system.

The sound of the Yamaha LL6M ARE can best be described as warm and rich. It is great for any genre where warmth is prioritized over cutting through a mix. Considering it’s price point, it is one of the better options around for singer songwriters. It’s a great performing guitar, and it would sound good on just about any recording.

For it’s price and features it truly is an impressive piece of craftsmanship. If you want a no-nonsense and straightforward dreadnought that sounds big, balanced, and has nice ergonomics, this is the guitar for you.

A guitar with warmth and complexity.

Established in 1982, Seagull has been producing some of the most unique mid-level instruments on the market for decades. The Seagull S6 is the brand’s best seller, and for great reason.

This guitar is constructed from a wild cherry, which is analogous to maple as a tonewood, emphasizing high-end frequencies and clarity. Wild cherry is also a more plentiful wood than mahogany or rosewood, making this guitar a great choice for those concerned about the impact on the environment. The S6 has a solid cedar top, which is also a bit of a rarity on steel string acoustics. Cedar has a signifcant amount of warmth to its tone.

This model doesn’t have any electronics, but sometimes a fantastic acoustic just makes sense, especially with this build quality.

The Seagull S6 Originals pairing of cedar and wild cherry the guitar is a bit darker than your standard dreadnought. This warmth is great for lush sounding open chords or fingerstyle playing.

Though the Seagull S6 Original may not be the most traditional sounding acoustic guitar on the planet, it does present a unique value to the musician who requires a rich and warm tone. It may not be a great fit for some of you, but for the right guitarist this guitar can hold its own with much more expensive instruments.

A budget guitar for beginners.

The Jasmine S-35 is the entry level guitar from Takamine, and it’s a good starter guitar that won’t break the bank.

The top is made from laminated spruce, while the back and sides are made from agathis. Spruce is a bright tonewood, emphasizing high end frequencies. Agathis is generally a budget option to approximate the tone of mahogany.

The depth on this dreadnought is nothing short of outstanding given the price. There were no buzzes, fret problems, or finishing problems with the S35. The satin finish helps the guitar sound bright and resonate well.

The S-35 presents a great value for players just starting out.

Among the intricacies of designing and building a guitar, the body shape is arguably the most influential on the final tone of the instrument.

If you’ve ever seen a picture of an old Delta-blues guitarist, odds are they were using a parlor guitar. There are a few reasons that make parlor (or O depending on who you ask) guitars incredibly well suited to that type of music.

Since the parlor guitar is so small, it reaches its full sonic potential much easier than a bigger guitar. So if you’re a finger-style player you’ll get a much better tone with less effort. Parlor guitars were popular for a substantial time, only to be replaced by larger body styles when guitar players started needing extra volume to compete with big band instruments.

The next size up from a parlor guitar, the OO shares a lot of similar features. The primary difference from the parlor guitar is that you get a tad more bass and trade off some mid-range and treble.

These two guitars are combined here because of how wide the designation of parlor guitar is. There is not a set industry standard size for a parlor guitar, and the designation can easily include everything up to a OOO body size depending on how the manufacturer chooses to market the instrument.

The OOO/OM guitar body styles are generally similar in volume to a dreadnought, but voiced more towards treble and mid-range frequencies.

Both OOO and OM body styles are perfect for musicians who want easy access to very usable flat-picking and finger-picking tones.

An OM guitar always has a more dramatic bend at the soundhole, while a OOO can sport a parlor guitar look.

Grand Auditorium body styles sound almost identical to a dreadnoughts. The main difference is that all of the frequencies are a bit tighter.

The Grand Auditorium body style is a great studio instrument, and a guitar that works well in live performance.

Dreadnoughts work well for flat-picking and finger-picking alike, though the guitar does take more effort to play than smaller sized instruments. For the majority of acoustic guitar players, the dreadnought body style is the most popular.

The round shoulder dreadnought is similar to your average dreadnought. It does not have significantly more volume, but it does have a slightly deeper bass response.

Designed as a custom instrument in 1937 for the actor/musician Ray Whitely, the Gibson Super Jumbo (sometimes referred to as the SJ-200 or advanced jumbo) has a staggering amount of breadth in its response.

Super Jumbo type bodies don’t have a very deep or focused sound, but in a live performance or studio context this body style is unmatched in its ability to fill out a song.

Which Guitar Body Style Is Right For You?

Generally speaking, bigger guitars are more suited towards playing with a pick while smaller guitars are voiced more towards finger-style work.

Bigger guitars are louder, harder to play, and a bit bassier, but they can work in just about any context provided they’re being played by a good musician. Smaller guitars are more oriented towards treble and mid-range frequencies, but if they’re layered into the mix correctly they can work wonders on beefing up your song.

We advise you to try several different body styles and pick the style that is comfortable and the guitar that most inspires you to play.

Martin LX1E Was the first one. I would say the Taylor GS Mini is the best.

Seagulls, Breedlove and Blueridge (Martin clones) are great guitars at all their price ranges. Look at user reviews on Amazon, Guitar Center, Musician's Friend, and Sweetwater to get a good idea.

What about Alvarez guitar, fender, Ibanez and washburn?