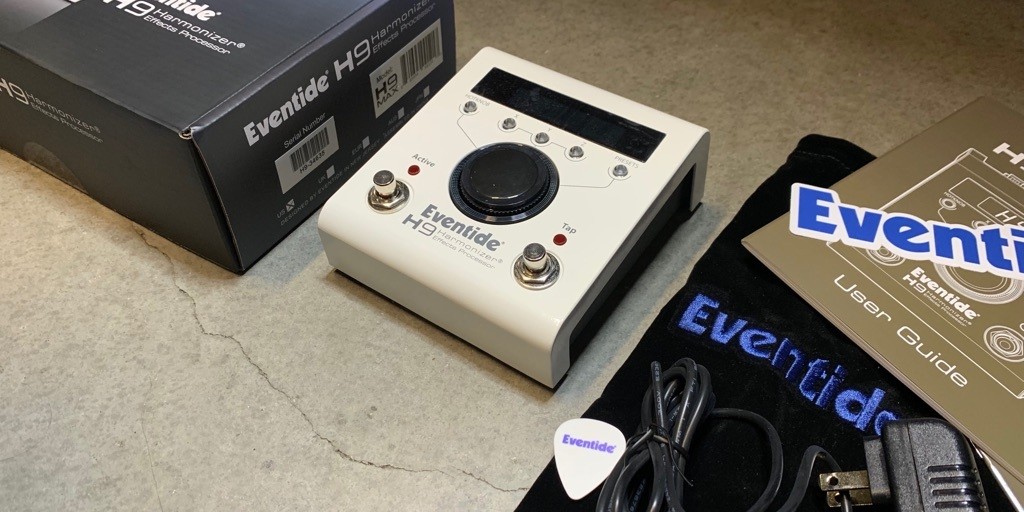 The Eventide H9 is nothing short of amazing. It can fill virtually any role because it is, in effect, an entire pedal board in a single stompbox. Eventide has been putting rack-grade effects into pedals for some years now, but the H9 Max takes that to a new level. We immediately placed it on our favorite multi-effects pedals list.

Eventide has made algorithms from Space, PitchFactor, ModFactor, and TimeFactor available in the H9 as well as come up with some effects exclusive to the processor.

The pedals form factor is remarkable for what it is capable of doing. The H9 is a svelte 1.53 pounds and 5.25” by 4.65”. It has true stereo inputs and outputs, an expression pedal input, and a mini USB port on the top of the pedal. There is a MIDI in and out that is mounted on the left side of the enclosure.

Operating the pedal is surprisingly simple thanks to its thoughtful design. It has a giant wheel in the center, which scrolls through the 99 factory presets. The large knob coupled with a large bright display make navigating the H9 as intuitive as it can get with this many tonal options. You can also scroll through presets using the right footswitch, which can serves double duty as a tap tempo as well. Once you have found the preset you would like to select, you engage it by pressing the left footswitch. If you want to adjust anything on the fly, there are three variable buttons that can adjust parameters. Simply press one of the variable buttons and the LEDs around the knob light up to display the level of the parameter. Turn it to tweak the parameter to your liking.

However, if you really want to make meaningful adjustments, I would suggest using Eventide’s H9 Control software. It is available complimentary from Eventide’s website for iOS, Mac, Windows, and Android. It is incredibly simple to use, and opens up expanded EQ options in a useful and intuitive fashion. Factory and custom presets are also easy to save and export to your H9 via Bluetooth connectivity. I was impressed how easy and stable the H9 Bluetooth connection was.

Using the H9 Control app on iOS is very intuitive and full featured. Most of the algorithms controls have been split into two screens, giving the controls plenty of real estate for manipulating the settings on your iPhone. Some features, like the pedal layout view, are not available on the iOS version, but any tonal adjustment is there, as well as a touch sensitive XY expression pad. Whether you opt to customize your settings on a laptop or your phone, it can’t be overstated how convenient the Bluetooth connectivity is on the H9. The iOS link in particular could be a lifesaver at a gig or live performance.

Be warned, once you start playing in H9 control, it can get addicting very quickly. Currently, there are 51 effect algorithms, and more than 500 presets available via H9 Control. They are consistently excellent.

All the Eventide effects you know and love can be had in the H9. Signature classic sounds like Crystals, Blackhole, and MangledVerb and more come installed from the factory, but you can swap them out for your own custom presets easily. This is especially helpful if you want to setup a preset per song for a gig. You can simply load them in order and call them up on stage.

The Harmonizer sounds great, as you would expect from the company that literally invented the effect.

The Harmadillo algorithm is the latest algorithm from Eventide and is a flexible harmonic tremolo. It sounds responsive and crisp, and adjusting the major parameters like shape and rate is really fun and satisfying, even on the fly. Again, within the H9 Control app, it’s easy to change LFO shapes to some really unique options like “ramp, lump, rump, and a continuously variable decaying slope.” There are also drive and tone knobs to add some dirt, which definitely adds some depth to the effect in my opinion.

The weakest effect seems to be the drives. Presets like the Metal distortion sounded a little hollow and thin compared to beefier sounds I get from dedicated distortion pedals. I realize that is a small criticism, but the other signature algorithms in the Eventide are amazing and by comparison the distortion is relatively lacking. The drive does sounds better when combined with other effects like reverb in some artist presets, for example. I should also add I like the basic overdrive more than the heavier presets.

Of the algorithms tailored for the H9, my favorite is SpaceTime. While most other algorithms run one effect at a time, SpaceTime gives you two delays, modulation, and a reverb combined. In H9 Control, you can change the parameters with an expanded EQ, or a view that illustrates the signal path between different pedals, which makes tweaking your settings intuitive. The Faux Leslie SpaceTime preset is not to be missed.

Another way to get around the limitations of single algorithms is running multiple H9s on your board, like Peter Frampton. This really opens up the possibilities!

One of the best things this pedals offers is the ability to evolve. As Eventide releases new algorithms, it is seamless to download them in the H9 Control app and transfer the new stuff to your pedal. I reviewed this pedal as Eventide announced a release, and it took about 15 minutes to download a completely new algorithm.

If inspiration strikes you, the remarkable versatility and processing power of the H9 can turn your dream into reality. It really is amazing what this little box can do. If you want the absolute highest quality, the H9 Max is a terrific way to get Eventide’s professional effects at a ridiculously low price per effect.