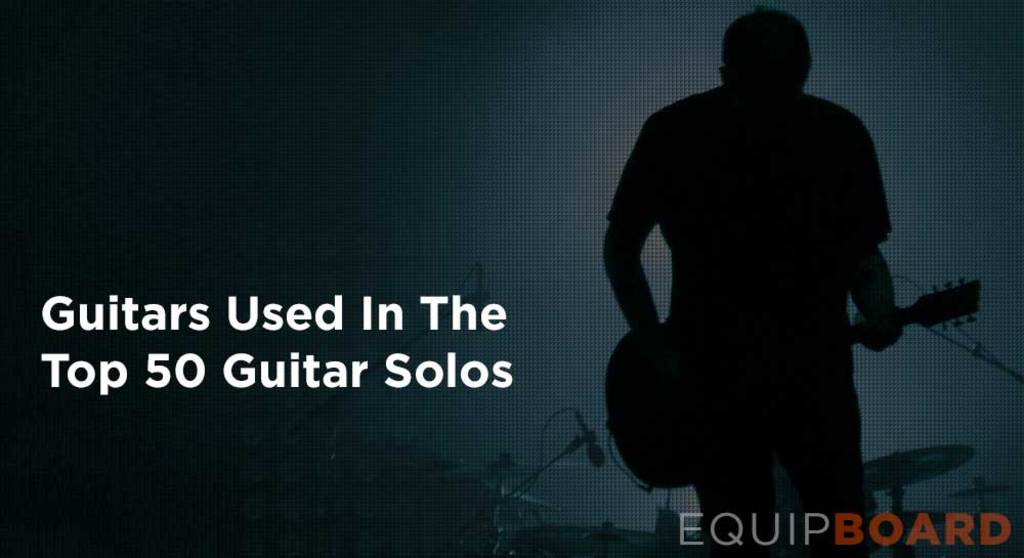 Every guitar sounds different, and everyone has their own preference on what guitar they use, particularly when it comes to guitar solos. In this article, we take a look NME’s 50 Greatest Guitar Solos and find out which guitars were used most.

Without further ado, here are the guitars used in the 50 greatest guitar solos:

The Gibson Les Paul is an absolute classic, first being sold by Gibson in 1952. It was designed by the great Les Paul himself, and was initially offered with two P-90 pickups, which are a little brighter than the warmth brought by the humbuckers included in the Les Paul today, a warmth that many now identify with the Les Paul. In fact, this is part of the reason that the Les Paul is so popular and great for heavier music.

The Fender Strat is arguably even more iconic than the Gibson Les Paul, not only for the way it looks, but also for its recognizable “twang.” It is this sound that has landed the Stratocaster in all kinds of music, with its natural bridge tone often being found in funk music. Of course, the Stratocaster isn’t limited to funk. In fact, it is largely hailed as the most versatile guitar ever built. Shift to the neck pickup or a combination of the two, and you have yourself a very warm sound perfect for any kind of rock. Just ask any of the eight guitarists found below.

The Gibson SG is another of Gibson’s extremely famous guitars, often used in hard rock and metal music. The SG’s curves give it a “devil horn” type look, and appropriately has a little more “bite” than the Les Paul, due to having a little more midrange frequencies. Fun fact: the Gibson SG was first introduced in 1961 as a redesign of the Les Paul, however Les Paul himself did not care too much for the design and asked that his name not be associated with it.

The Epiphone Riviera is Epiphone’s Gibson ES-335, featuring much of the same design at a lower price. Of course, that doesn’t necessarily make it a guitar of low quality, as Nick Valensi seems to be aware of. While it certainly has a different sound than the classic ES-335, being, as many suggest, much brighter, it still features that classic look and the Bigsby tremolo, making it a very classy guitar indeed.

The Manson MB-1 is Matt Bellamy’s signature guitar, and many suggest that it is an extremely versatile guitar. Perhaps the most interesting part of this guitar is the fact that it also includes MIDI capabilities, with a Kaoss MIDI Control Screen being included in the face of the guitar. This essentially allows a user to turn their guitar into a sound-making machine. Of course, that’s if you can get your hands on one - there have only been four production runs for the guitar, and only of between 25 and 35 guitars at a time.

The Hohner Madcat is almost uniquely used by Prince, and was certainly made famous by him. The guitar is in the design of a Fender Telecaster, and was first produced by a company called Morris. H.S. Anderson, with the rights later being sold to Hohner. The guitar can be found in many different Prince recordings, and while it is used by the musical genius, many consider the guitar a cheap Fender knockoff. Despite this, others say that the guitar is well built, and very vibrant in sound, especially with an overdrive.

The Fender Jazzmaster is a lesser known guitar as far as Fender goes, but still has a long history of use. The guitar was first introduced in 1958 and was marketed towards jazz guitarists, however was soon adopted by rock guitarists and for good reason. The guitar features a very warm sound, but has a short sustain, again tailored to jazz guitarists. It also is modeled with an offset shape in order to be more comfortable for seated playing.

The Frankenstrat is a guitar created specifically by Eddie Van Halen, and is basically the sound of a Gibson guitar with the body of a Fender. This one of a number of Van Halen’s guitars, and was the first time that Van Halen consented to a company commercially releasing one of his guitars.

The Red Special is another custom guitar, owned by Queen’s Brian May and was built for him by his father, Harold, in the early 1960’s. Interestingly enough the guitar was intentionally designed to give feedback, creating different sounds as it was moved in front of an amp. May wanted the guitar to interact with him and the air around him.

Another lesser known Fender guitar, the Mustang started relatively slowly, but gained popularity in the late 80s and 90s as one of the go-to guitars for alternative rock. The fact that Kurt Cobain used it certainly didn’t hurt. The Mustang features two single-coil pickups with a unique tremolo, in all sound very bright and a little thin.

While we’ve had our fair share of lesser known Fender guitars, the Melody Maker is one of Gibson’s. The guitar was introduced in 1959, and many suggest it is a very warm sounding guitar, even for a Gibson, which are known to be warm anyway. The shape of the guitar is similar to that of a Les Paul, however it is thinner and a little less rounded.

The Gibson Explorer was first released in 1958, but its design was way ahead of its time, being marketing as a “futuristic” guitar, along with its sibling the Flying V, released in the same year. The guitar was, however, not so successful, and was disctinued between 1963 and 1976. The guitar became particularly successful in rock after that, owed largely to the cutting tone and fast attack of the sound.

The Gibson ES-335 is an absolute classic of a guitar, and it makes sense that its only appearance on this list would be under the name Chuck Berry. The ES-335 is was the world’s first thin line archt. semi-acoustic guitar, and was marketed as a jazz guitar, however it found success in blues and rock as well. The sound of the guitar is very warm and hollow, as would be expected from a semi-acoustic guitar.

The Epiphone Coronet is somewhat of an entry-level guitar, and was originally released in 1959, being discontinued in the 70s before a run in the 90s. It is currently not being produced. The Coronet sound is sometimes likened to the Fender Telecaster in that it is very twangy, however it is a little warmer than a Telecaster.

The Ibanez Artstar is another semi-hollobody, and was originally built to be a jazz guitar. The guitar currently features Ibanez Super 58 pickups, which are known for their warm and smooth tone, perfect for jazz. The guitar is another somewhat entry-level guitar, costing $999 for a new model.

The Airline was made from 1958 to 1968, and is often associated with Jack White. It is possible that an Airline guitar could be released again, with Eastwood having bought the rights to the name in the mid-2000s. The guitars were relatively cheap even up until the mid-90s, however with the rise of their popularity due to artists like Jack White using them. The original Airline uses single-coil pickups, meaning that it will sound a little sharper and clear.

The selection of the greatest guitar solos is always subjective,To leave out The Beatles, The Byrds The Hollies who all used Rickenbacker 12-strings to create new sounding solos is to leave out a whole genre started by a particular brand of guitar which changed the face of popular music in the 1960.s

I wonder what was the criteria used to put that list together...

A worthy addition for the ES-335 besides Chuck Berry's Johnny B. Goode would be Rush's Working Man with scintillating solo by Alex Lifeson.