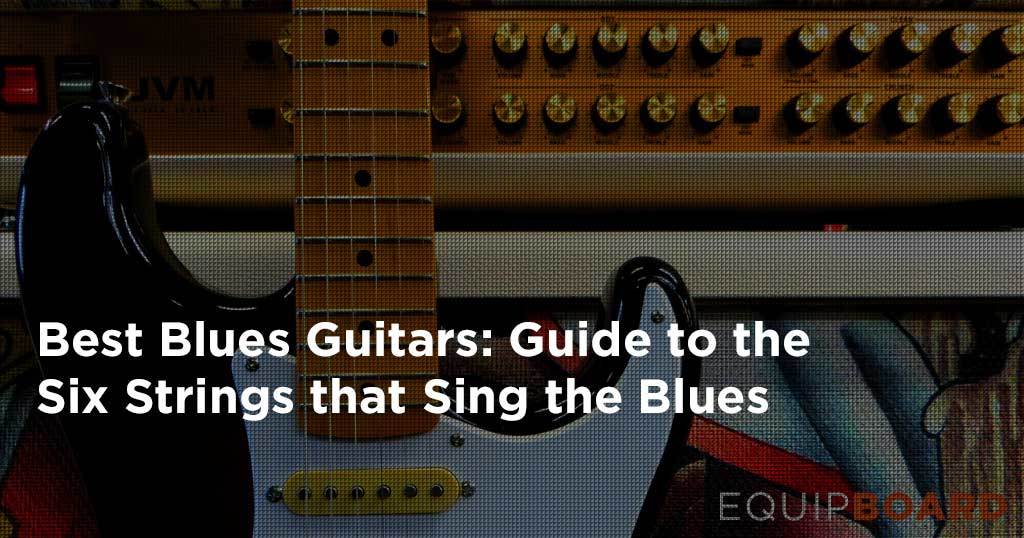 From its Delta roots to its revitalization by the best musicians England has ever seen, the blues has been on the cutting edge of Western music for more than 70 years. It’s a cornerstone to everything we love about modern music, including rap and country.

Considering how influential and diverse the genre is, it’s no surprise that so many aspiring musicians want to try their hand at it. However, it’s no easy feat trying to figure out how to choose the best blues guitar for your needs. But fear not! If you’ve ever had a hard time trying to find your perfect blues axe, you’ve come to the right place! This article will give you all the information that you need to find your dream guitar, as well as give you five great recommendations to aid you in your search.

What Is A Blues Guitar

Simply put, a blues guitar is a guitar that you play the blues on. Like many genres, most of the guitars that people say are blues guitars have earned that distinction by being used by famous musicians in the genre. No one really famous played blues on a Jaguar or a pointy hair metal guitar, so people think that those types of guitars aren’t suited to the genre.

This belief has some basis, but only a bit. You really can play the blues on anything, there are just a few guitars that are more suited to it than others. In fact, pretty much anything without active pickups will do just fine.

At its core, most sub-genres of the blues utilize light overdrive and maybe fuzz depending on the artist. The types of guitars most suited to this would be ones that are intended to be played with a limited amount of distortion. For an example, a Stratocaster can handle the blues just fine. Same goes for a Gibson (or an Epiphone or Ibanez depending on your budget).

At the end of the day the blues is more of a technique driven music. The characteristic sounds of the blues aren’t from any one guitar (when taking the genre as a whole) it comes from intensely passionate and soulful playing.

The only thing you really need to sound good playing the blues is a tube amplifier. If you’re on a budget you definitely can’t go wrong with a Peavey Classic 30. It’s not unheard of for those to pop up on Craigslist for $300 and under, which is an absolute steal.

Apart from your amp it’s more about the specific type of blues sound you’re trying to capture. If you want to bust out some SRV licks you’re going to want a vintage inspired Strat (the Classic Vibe series is cheap and nails this!), and if you want to do some B.B. King inspired wailing odds are you’re going to be happiest with either a Gibson or Epiphone ES-335.

When you’re starting out, don’t worry too much about your gear. With the exception of really high output guitars (like ESP or Jackson), any quality instrument (expect to spend $300 at least) is going to do just fine for this type of music. If you’re really serious about sounding good playing the blues it’s most important that you listen to as much it as possible and that you try and figure out how to play a few songs in the genre.

What Should I Look For In A Blues Guitar?

This type of music doesn’t really require anything special, so just focus on finding a guitar that feels good to play before anything else. As with any guitar, make sure that every note on the neck frets cleanly and that there aren’t any obvious signs of structural damage like cracks or warping.

As always, we try to make sure that our recommendations are applicable to as many of you reading this as possible. Sure, a Custom Shop Strat might sound better than a Epiphone Dot, but not everyone can afford to drop a few grand on a guitar. Just keep in mind that your best option may not be the best option for your peers, and vice versa.

If you’re still not sure where to start on your search for the perfect blues guitar you’re in luck! The five recommendations below are all killer instruments for their respective price points, so you’re sure to find something that you’re going to love. Happy shopping!

Blues Guitarists that are Associated with the Stratocaster

Blues Guitarists that are Associated with the Les Paul

Blues Guitarists that are Associated with the Telecaster

Perhaps the most famous of all blues guitars is a 335. Yes, we're talking about B.B. King's "Lucille" here. Gibson's ES-335 is a semi-hollow guitar, meaning the guitar has a solid block of maple running through it.

Blues Guitarists that are Associated with the ES-335

Blues Guitarists that are Associated with the Casino