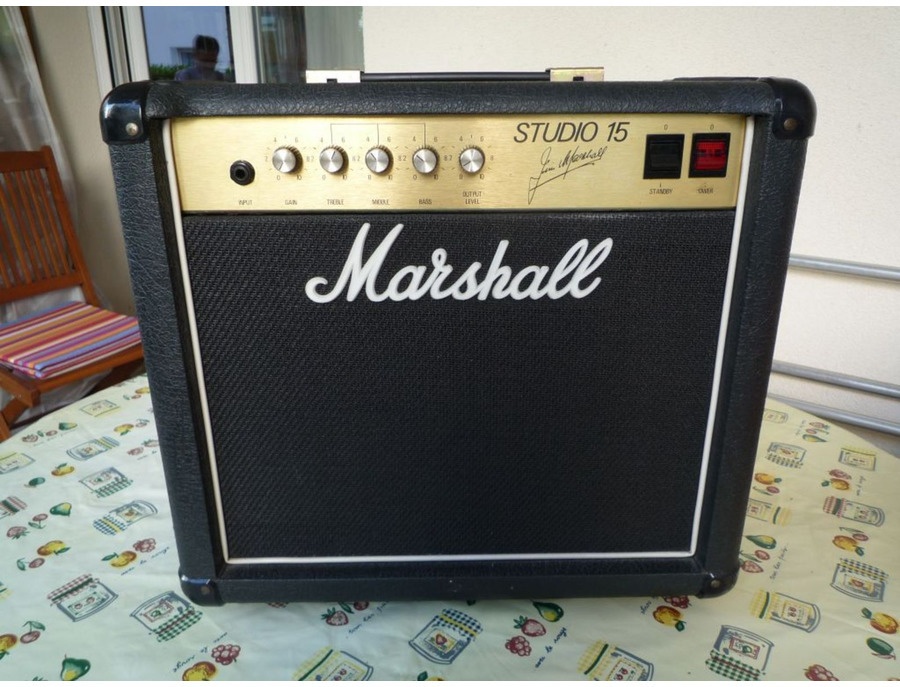 jimmarchi1|2027
about 5 years ago
edited almost 2 years ago

I regret selling mine.

This is a conservative 15-20 watt, cathode biased, single channel mini-marshall. Some will say its an 80s 18 or 20 watt update, but apart from the bias scheme and volume range the similarities end there. The Studio 15 has two 12ax7es and two 6V6 output tubes, solid state rectified. She was the only 6V6 powered Marshall until their questionable Haze amplifier. At first glance the control panel is like a JCM800 sans-presence, however the implementation of the dual triodes as gain stages in relation to the tonestack placement is more like certain 60s Gibson amps, weird implementation but sweet and easy to dial in.

Mine had a first generation Marshall branded V30 labeled "Vintage Speaker". This is the best sounding V30 I have ever heard (I ran other amps through it). I don't know what Celestion did to this speaker design after releasing it to the general public (for a while it was a marshall exclusive), but they wrecked it.

I liked everything about this amp right down to the very well implemented post phase inverter master volume control. Marshall's PPIMV had some clipping diodes strapped to it that were wired in such a way as to only be in circuit at very low MV settings to help and a little feaux power amp crunch. Speaking of power amp crunch, the Studio 15 has wonderful saturation when turned up. at medium MV settings the Studio 15 can cop some basic JCM800/metal-panel JMP sounds.

The thing I liked best about this amp was that it had the nicest clean tone of any Marshall. It was Marshally clean all right, but it had lots of sparkly top end, not hard, overhyped treble. The clean was great with the amp wide open using your guitar volume to vary gain. Other features included a line out and a headphone out that doubled as a powerful attenuator for late night shredding.

I liked everything about this amp really. My only caveats were...

1) the small cab could sound boxy 2) all the jacks were PCB mounted and JCM800 era jacks are chintzy 3) poor ventilation 4) could have used a smidge more gain on tap, but I don't know how they would have accomplished this with the tube compliment they had to work with... another 12ax7 would've been way more gain then needed even if they had only used 1 of the triodes.

I often regret selling this little beastie, but the values went crazy lately so out she went. I really played her very rarely. She was also intensely reliable as all pre-JCM900 Marshalls are.