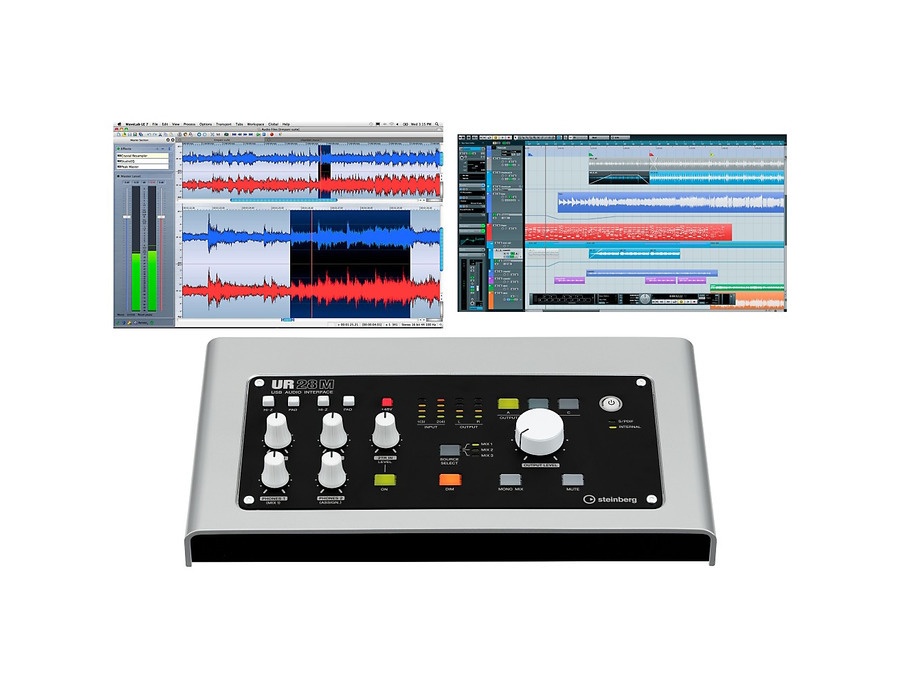 An elegant audio interface sitting beautifully on your studio desk, the Steinberg UR28M offers two TRS inputs, six TRS outputs and two Neutrik combo inputs that come with first-class D-Pre mic preamps and 48 volt phantom power, pad switches for mic signal attenuation and high-impedance input that permits you to plug your guitar directly into the interface. The two-track input is an additional option for monitoring reference sources. The console features a practical master volume knob alongside DIM, Mono, and Mute monitor level controls while the onboard dspMixFx technology provides DSP-powered, latency-free monitoring with effects together with any DAWs including Cubase.

Designed for easy access to controls and connectors, the UR28M's console comes with a single prominent output volume knob for individually controlling the levels of one of three stereo output pairs or the levels of six outputs simultaneously. You can also select between three monitoring mixes set up in the dspMixFx mixer or Cubase which is routed to the selected outputs. Several smaller rotary knobs to control signal levels of inputs 1 and 2 and the levels of the two headphone outputs. while further dedicated switches for inputs 1 and 2 allow you to employ 48-volt phantom power, 26dB signal attenuation and connecting high-impedance instruments. Other controls include the Dim button for attenuating all line output signals by 20dB, the Mono button and the Mute button for muting the selected output signal. Four-segment LED meterings for the inputs and the output are also available on the UR28M console.

The UR28M is a top-notch recording system with plenty of inputs and outputs to connect to microphones, instruments, studio monitors and headphones. There's a USB connector to hook up to either your Mac or PC that lets you record and mix your productions with the included Cubase AI workstation or other audio software.

Best setups for your gear

The UR28M is a top-notch recording system with plenty of inputs and outputs to connect to microphones, instruments, studio monitors and headphones. There's a USB connector to hook up to either your Mac or PC that lets you record and mix your productions with the included Cubase AI workstation or other audio software.

Cubase AI 6 included
Cubase AI 6 is a lean Cubase version tailored to record your music without additional bells and whistles. Based on the same core technologies as Steinberg's highly acclaimed Cubase 6 advanced music production system, Cubase AI 6 offers a comprehensive feature set for composing, recording, editing and mixing. Run it with the UR824 and Cubase AI 6 provides a full system solution for recording music in studio quality, used by many musicians and producers around the world.

Award-winning 32-bit floating-point Steinberg Audio Engine
Cubase AI 6 uses the same professional audio and mixing engine as Cubase 6. With a resolution of up to 24-bit and 96 kHz, as well as 32-bit floating point internal processing, Cubase AI 6 delivers fantastic sound quality even to the home studio.

Up to 32 simultaneous audio tracks with 24-bit/96kHz and 48 MIDI tracks
Cubase AI 6 is ready even for demanding songwriting and production projects. Offering up to 32 audio tracks, up to 48 MIDI tracks to control external instruments, as well as up to 16 instrument tracks and 8 slots in the VST Instrument rack to control virtual instruments, Cubase AI 6 has enough power to suit the needs of discerning musicians and records as many as 16 audio channels simultaneously.

Superb audio and MIDI editing
The easy-to-use Key, Score and Drum Editors included in Cubase AI 6 help in getting the job done quickly without blocking the creative process when writing or producing a song. Cubase AI 6 also includes support for Steinberg's realtime audio time-stretching and pitchshifting technology called "AudioWarp", allowing audio files to be played at a tempo or in a key different from the original file without any offline processing. AudioWarp also supports ACID files, making it compatible to hundreds of loop and sound libraries available. Cubase AI 6's powerful audio editing functions include a state-of-the-art transient detection, which is particularly useful for slicing and manipulating drum or percussion loops.

VST Mixer with up to 4 Inserts and Sends per channel
The mixer section in Cubase AI 6 offers everything musicians need to create professional-quality mixes with sample-accurate timing and full plug-in latency compensation across the entire signal-path. With up to four insert effect slots and four effect sends and returns as well as 8 group channels, this powerful virtual mixer offers a lot of flexibility. The 4-band fully parametric EQ features exact control of any signals frequency-response. Every knob or function can be automated. In addition to the included plug-ins and instruments, Cubase AI 6 is compatible with hundreds of additional virtual instruments and effects available for the VST platform today.

Why URS Series?
Excellent sound, swift workflow
The UR series offers recording and production solutions for ambitious musicians and professional engineers alike. Connections required for studios such as word clock, S/PDIF and ADAT plus a range of Neutrik combo connectors on the UR824 (#H77574) and routable TRS I/O on the UR28M are at hand. Also on board are EQ and compression tools in the form of the Sweet Spot Morphing Channel Strips on each channel, not to forget the REV-X plug-in that provides quality reverb for modifying the intricacy of a sonic space. The UR824's eight line outputs offer full support for surround productions up to 7.1, while the UR28M allows for up to 5.1 surround with its six line outputs.

Crisp, crystal-clear sound
The audio quality of the UR interfaces is absolutely stunning due to its state-of-the art convertors and studio-grade preamps. The UR824 (#H77574 features eight of the latest generation of Yamaha microphone D-Pre preamps while the UR28M comes with two D-Pres. Each discrete Class-A analog mic preamp utilizes an advanced Inverted Darlington circuit design and boasts a -26 dB Pad selector as well as 48 volt phantom power. The result is a sumptuously smooth and richly detailed sound normally only attained by preamps costing many times more; the outstanding sound of these mic pres obviate the need for all but the rarest vintage preamps.

Just as important as the preamps are, of course, the converters behind them. The UR824 includes first-rate A/D and D/A converters that offer absolutely crystal-clear sound that portrays the sound with astonishing precision and clarity.

Cubase or not Cubase
To unleash the full potential of each UR interface, you needn't employ Cubase as the DAW of choice, but there are undoubtedly certain benefits that remain unrevealed to non-Cubase users. That's why a streamlined version of the award-winning Cubase music production system is included with both the UR824 (H77574) and UR28M.

Combining the UR series with Cubase offers advantages such as full integration into the Cubase user interface for a smooth workflow. But there are plenty of reasons to take a closer look at the UR824 (#H77574) and UR28M no matter what DAW you're on. Included are ASIO and CoreAudio drivers for full compatibility with any DAW application using either of these driver standards. The dspMixFx DSP mixer runs on Mac and PC and handles all aspects of DSP, routing, monitor mixing in one easy-to-navigate interface. 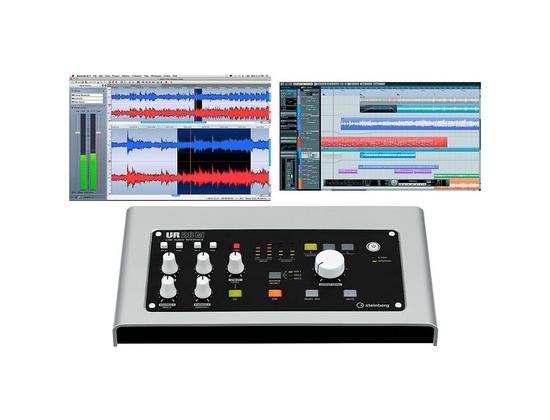