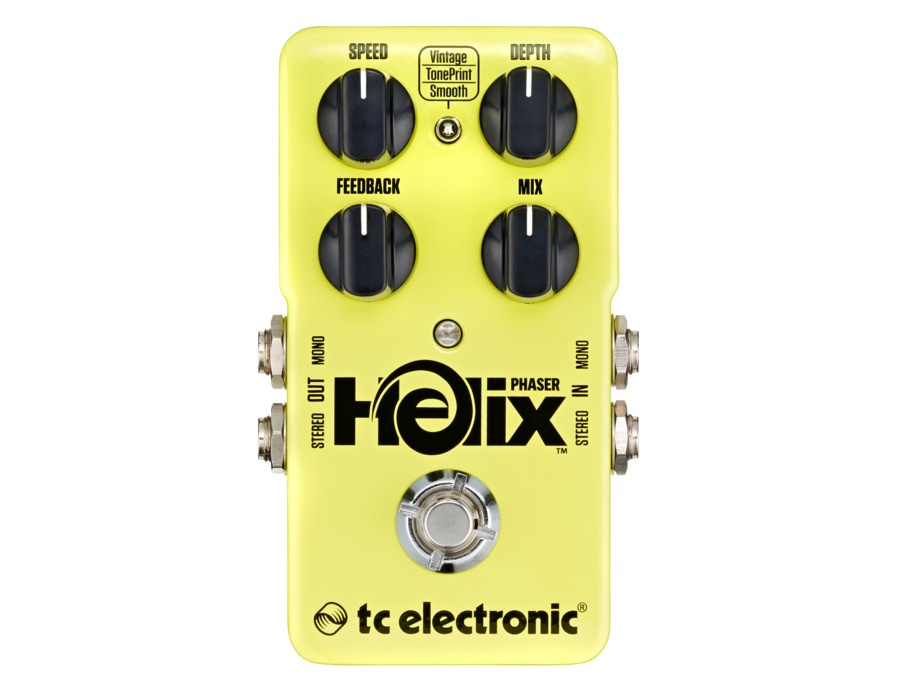 TC Electronic introduced the original TonePrint line of pedals back in 2011 and instantly they became a success, with a no-nonsense approach to the essential functi...

TC Electronic introduced the original TonePrint line of pedals back in 2011 and instantly they became a success, with a no-nonsense approach to the essential functions guitarists want, along with the ability to load TonePrints from the megastars of rock royalty. Not just resting on their laurels, and listening to what guitarists worldwide have been asking for, TC Electronics has created the Helix Phaser. Guitarists get all the classic phaser sounds, from subtle sweeps to massive sonic bends straight out of the box. However, with the ability to design their very own pedal via the TonePrint editor, this makes Helix Phaser one of the most flexible and versatile phaser pedals ever.

Tons of guitarists throughout history have sworn by phasers as their secret tone weapon. Its an effect thats helped define countless legendary records within the world of pop, rock, metal and indie. Once you kick in the Helix Phaser, youll know why. With its extensive set of controls, the Helix Phaser enables you to dial in everything from vibrant vintage-sounding Gilmour swirls and big-and-bold Van Halen sweeps to more modern phaser tones a la Smashing Pumpkins and Radiohead.

Waves of Versatility
You know we cant release anything without putting that certain TC twist on it. So instead of making a simple set-it-and-forget-it phaser, we went ahead and created the most flexible and versatile phaser ever. Youll get everything from subtle sweeps to massive sonic bends straight out of the box, but hook it up to our free TonePrint Editor and all thats left to say is holy mother of tone! Tone-tweaking paradise awaits, with only the sky and your imagination as the limit.

TonePrint
As if the freedom to completely create your own dream phaser from the ground up via the TonePrint Editor wasnt enough, youll also get instant access to amazing recreations of some of the most legendary phaser units ever, plus custom-tuned phaser sounds created by some of musics finest via the free TonePrint App for Android and iOS.

Speed
From slow, evolving sweeps to fast, pulsating spins. Its all there and then some. Just turn this knob and decide how fast you want to go.

Depth
Want to tame those sweeps a little? Or maybe go for a full on psychedelic-fest? Turn this dial and find your personal sweet spot.

Feedback
Turn this dial for a more pronounced and resonant phaser effect and get ready to feel the feedback.

Mix
This controls the overall mix between your dry sound and the phaser effect. Crank it if you want to be heard, or dial it back if you like your phaser tones
extreme but low in the mix.

Mini-Toggle
Want your phaser tones gritty and swooshy, or maybe a little more smooth and rounded? Flip the mini-toggle and choose your style. Set it in the middle and activate the TonePrint functionality for your own custom-made phaser sound.

True Bypass
Helix Phaser was made to let the "you" in your playing shine through. Its True Bypass design ensures zero tone coloration, letting your tone shine through with no loss of high-end.

Analog-Dry-Through
Helix Phaser always lets your original sound pass without ever converting it to digital, keeping every nuance in your tone intact with zero latency.

No reviews or videos yet for TC Electronic Helix Phaser.

With an Equipboard account you can rate this item, add it to your collection, submit a review to discuss what you like and dislike about it, and associate TC Electronic Helix Phaser to artists that use it. Create an account! 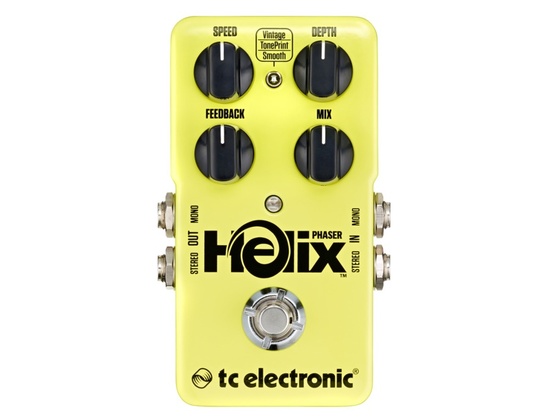