Save
Genres Artists 0 Reviews 4
FIND IT ON:

Based on the number of artists & members using this, our genre confidence is medium. 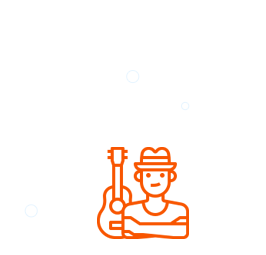 Based on 4 Reviews and 10 Ratings

There are better options

I didn't like much this amp. Couldn’t get a good sound out of it and all the built in effects are confusing and make it difficult to find your tone.

I have a bit of a thing for portable/battery amps and own four. I often see the DA-5 and its successor the Mini 5 rated favourably over the Roland Microcube. They have relatively similar capabilities but which one I'd consider 'better' would depend on one's expectations.

The DA5's main drawback is its fiddly operation. The amp models, gain and level are straightforward enough but its plentiful effects are available in limited combinations and oddly, a combination I'm most likely to use, compression+reverb, is unavailable! Furthermore, fine tuning of effect parameters requires unintuitive button and knob manipulations and any adjustments thus made are lost as soon as the amp is switched off! Consequently I never bother with the onboard effects. Instead I carry a small preconfigured multi-effect pedal that I can move between my portable amps.

In its favour, DA-5 benefits from a larger fuller sounding 6.5" speaker and various forums report the DA-5 can be much enhanced by a speaker upgrade. I'm considering the frequently recommended Eminence Alpha 8A 8" as a replacement to the stock 6.5" speaker - check out YouTube for upgrade demos! . I find just a couple of amp models appealing, clean 2 and Blues 3. The others are relatively redundant. Playing blues and surf guitar, the high gain settings just don't interest me.

The DA5 is only an inch or two larger in each dimension than the Microcube but that's enough for it to be significantly less portable. I consider the DA5 to be easily car portable, rehearsal and busker friendly, but I wouldn't want to carry it far on public transport or around a big festival site. The compact Microcube fits comfortably into a carryall with room to spare. It may have fewer amp models and effects but they cover a similar ballpark and are much easier to set swiftly. Microcube settings stay where you've left them and its intuitive operation is a big advantage over the finicky VOX. Both amps for me have just a couple of 'optimum' tone settings which I'll keep them at.

The VOX DA5 requires more effort to operate and transport and for this reason I'd hesitate to declare a 'better' amp between the two. If tone and volume is your priority I'd recommend the DA5 (or its current successor) plus an 8" speaker upgrade, why not! - The Microcube would be my first recommendation for a child or beginner, indoors or where portability has priority over output.

For the record, my portable amp of choice remains the 'Legendary' Pignose. It's a fraction the size of either DA5 or Microcube and delivers a fine blues tone with plug and play simplicity. I pair it with a cheap little Pockrock multi effect unit if I fancy indulging in a bit of modulation.

It is a 5 watt practice amp but the effects and quality are mind blowing. You cannot tell it's a small practice amp you're listening to unless you actually see it. I personally use it while playing live at times giving line out. Has all types of effects from wah to general reverb.

What a great amp, so much fun to use!

I bought this on a lark in a package deal with my strat. I thought it would be a novelty but I have used it a lot more than I thought. Especially when I finally understood just how cool it was to have an amp than can run on batteries! The amp has 3 power settings: 5W, 1W, and .5W. And surprisingly, even the .5W settings gets plenty loud! After 6 months, I am still on my first set of "C" batteries. Just as mind-blowing is just how good the effects are on this little box. The reverb is luscious, the flanger is flang-tastic, and a ton of other usable effects. Also loaded with over 11 different amp "voicings" (clean, crunch, blues, etc.), there is a just a huge palette of tones and sounds on tap in this tiny box. Buying a DA5 was definitely a happy accident.