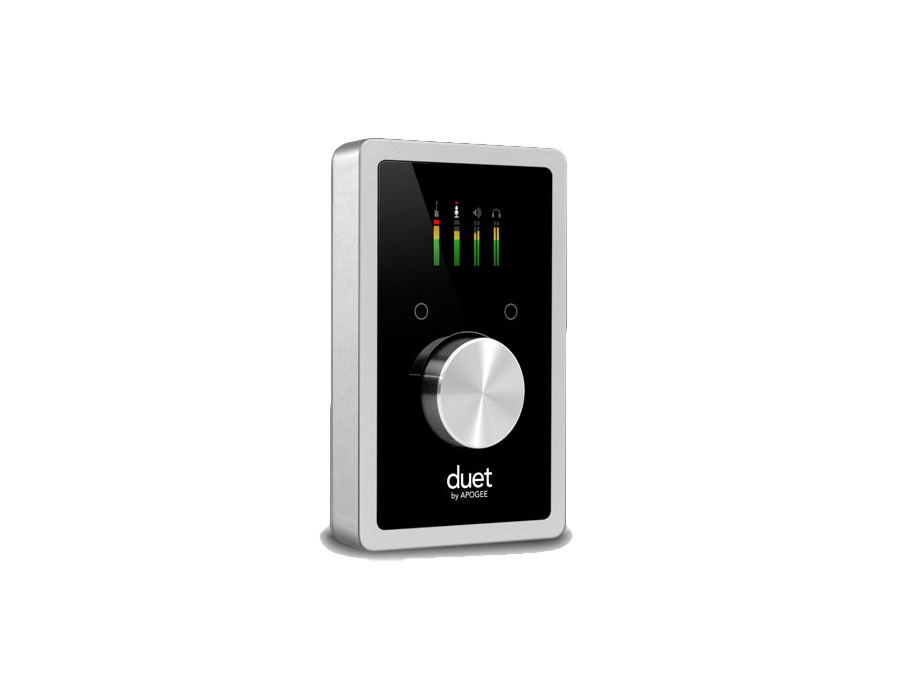 Apogee Duet is an award-winning audio interface, headphone amp and MIDI interface making it easy to create professional recordings anywhere on your iPod touch, iPhone, iPad or Mac. With Apogee’s legendary digital audio conversion and world-class mic preamps, Duet is the best way to capture your music with incredible dimension and detail.

The new Duet for iPad and Mac features special circuitry designed to deliver professional performance for iPad use along with low latency USB 2.0 performance for Mac. And with the addition of MIDI I/O you can connect and power a Core MID compatible keyboard/controller while using Duet with your iPad or iOS device.

A difference you will hear

From the mic preamps to the AD/DA converters and the clocking, Duet is best-in-class and cutting-edge Apogee technology. With components carefully selected in critical listening tests and a highly efficient circuit design, Duet was built by Apogee engineers to make a difference you can hear.

Much like the AD/DA converters, Duet’s mic preamps feature the latest components and offer seamless click-free transitions as the gain increases and decreases throughout the incredible range of 0-75dB. This unprecedented feature allows you to dial in the perfect level, either with the controller knob or from within software, while delivering ultra-low noise and smooth, crisp detail. Duet’s mic pres are suitable for all dynamic, condenser or ribbon microphones, allowing you to capture any sound without compromise.

iPad puts you in touch with your creativity

Interacting with iPad to make music is like playing an instrument. In fact, some apps like Apple’s GarageBand turn your iPad into a guitar or virtual instrument. Whether you are moving faders on a mixer, adjusting software parameters, or editing a waveform, iPad’s multi-touch interface is a more hands on environment and superior to mouse clicks or track pad swipes.

Setting up your studio has never been easier

iPad makes everything easier with a simplified user interface and plug and play connectivity for accessories like Apogee audio interfaces. You’ll be amazed by how simple it is to set up your studio.

Duet’s 2 combination input connectors (XLR and 1/4”) allow you to connect microphones, guitars and keyboards or your favorite external mic preamps, compressors and EQs.

With these four outputs it’s possible for a DJ to monitor a separate mix in headphones while sending a house mix to the club, a live performer to send a click track to in-ear monitors while sending a backing track to front-of-house, and a recording engineer to send a headphone mix to the performer while dedicating the main outputs to studio monitors.

MIDIDuet provides a single USB MIDI connection for your CoreMIDI compatible keyboard, synth, or DJ controller. This eliminates the need for an external MIDI interface and promotes an all-in-one music creation solution where Duet and Maestro manage all audio and MIDI. On iPad, Duet’s MIDI connection allows both Duet and a keyboard or DJ controller to be connected at the same time to the iPad’s single connector (Lightning or 30-pin).

The high-resolution OLED screen built into Duet’s top is the main control center for Duet, delivering visual feedback for multiple functions including metering, numeric value for input and output levels, input grouping, and phase, muting, phantom power and Soft Limit indication. With this display you know the status of any input and output at any given moment without having to refer to Maestro or your recording software.

Duet also introduces configurable touchpads. The two touchpads, located on either side of the encoder knob, allow you to quickly access output functions such as “Mute Outputs”, “Dim Outputs”, “Sum to Mono” or “Toggle Headphone Source”. Each are assignable using a drop-down menu within Apogee’s Maestro 2. This unique feature allows you to select the function you want and access it directly from Duet without having to look at software.

Along with its sleek aluminum chassis, the multi-function controller knob is one of the most recognizable features of Duet’s design. This central control feature allows you to quickly and easily toggle through Duet’s inputs and outputs and set levels while looking at Duet’s dynamic OLED display. 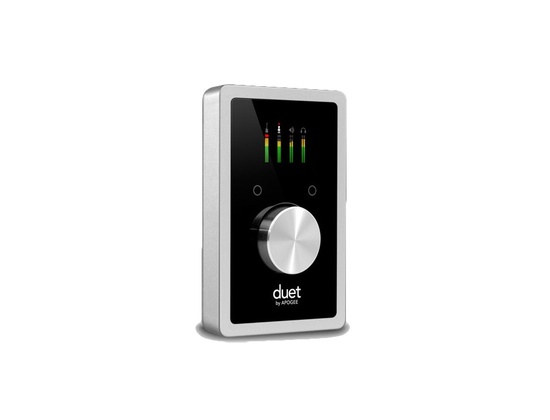